Is there an equation to describe regular polygons?

For example, the square can be described with the equation $|x| + |y| = 1$. So is there a general equation that can describe a regular polygon (in the 2D Cartesian plane?), given the number of sides required?

It can be assumed that the centre of the regular polygon is at the origin $(0,0)$, and the radius is $1$ unit.

If there's no such equation, can the non-existence be proven? If there are equations, but only for certain polygons (for example, only for $n < 7$ or something), can those equations be provided?

Any polygon (regular or not) can be described by an equation involving only absolute values and polynomials. Here is a small explanation of how to do that.

So I think the octagon is given by

then your polygon is given by

Here's a parametric equation I have made for a regular $n$-gon, coded in R: 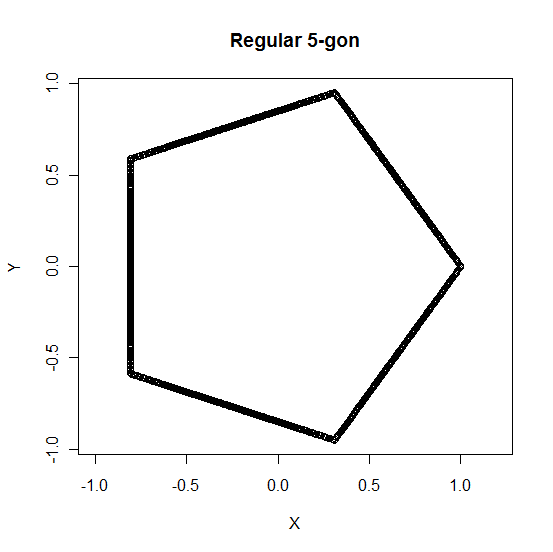 The formula I used is

This equation is actually just the polar equation for the line through the point $(1,0)$ and $(\cos(2\pi/n),\sin(2\pi/n))$ which contains one of the edges. By restricting the range of the variable $\theta$ to the interval $[0,2\pi/n[$, you will in fact just get that edge. Now, we want to replicate that edge by rotating it repeatedly through an angle $2\pi/n$ to get the full polygon. But this can also be achieved by using the modulus function and reducing all angles to the interval $[0,2\pi/n[$. This way, you get the polar equation I propose.

So, using polar plots and the modulo function, it's pretty easy to make regular $n$-gons.

Here is another parametric equation for a regular $n$-gon with unit radius:

The provenance of this set is a bit more transparent if we switch to matrix-vector notation: 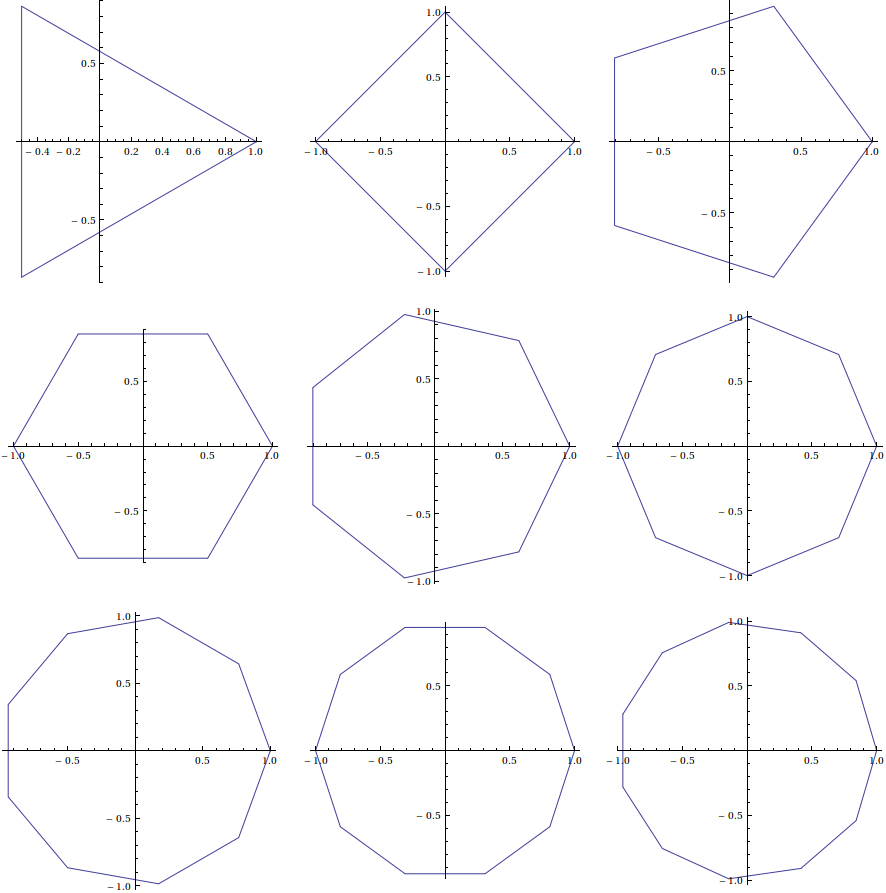 It would work just as well with cosecant as with secant.

I came up with this to plot a hexagon tessellation in desmos....the [list] funct "hides" the overlay ...so it isn't really a single EQ.....actually there was very little info on this.....took me weeks....enjoy

A more general formula exists, for star polygon too and its smoother variations:

or, with polar coordinates:

$\phi$ - angle;
$\rho$ - radius;
$n$ - number of convex vertices;
$m$ - determines how many vertices the sides will lie on one straight line;
$k$ - hardness - for $k=0$ we get a circle regardless of other parameters, for $k=1$ - a polygon with straight lines, with intermediate values from $0$ to $1$ - intermediate figures between the circle and the polygon.

For more details see this paper (at russian)

Reposted from PolymathProgrammer.com, my answer to my own initial query. Generated mostly on my own after some initial help from a friend (Jason Schmurr) and my dad (Russell Gmirkin)

I believe I've solved my own inquiry. The following are functions that, when graphed in polar coordinates render lovely polygons.

I’d be interested to know whether this approach, describing the radius of a polygon as a periodic function, has any precedent (has anyone else done this, or am I the first)? I’ve been working on this idea for some time (on and off for years), but just recently overcame some stumbling blocks with a little help from a friend and my dad. Most of the legwork was my own, though.

The relatively final form(s) appear to be:

Don’t know whether they simplify at all to something less complicated… Even if not, they’re beauties!

If it's a unique solution and I'm first to it, I submit these as the Gmirkin Polygon Radius Function(s) (or some suitably nifty sounding name that’s not too cumbersome). *Smile* Heh.

I may write them up formally for publication at some point, once a few previous engagements clear up, assuming they’ve not previously been published or some directly correlated function has already been published elsewhere. (If so, I’d like to know when, where and by whom; for academic curiosity’s sake.)

It is my belief that a similar function exists for describing 3D Polyhedrons of some description(s). Though, I have not yet even attempted such a case and will probably stick to 2D cases for now. I can also tell you that if you vary the phase shift of the denominator [Abs[Cos[]]] terms by differing amounts (though not both by some multiple of $\pi/4$, $\pi/2$, etc.), you can also reproduce rectangles, isosceles triangles, etc. In some cases you can also generate diamond shapes by varying some other parameters. It's s surprisingly robust solution, as I'd hoped. Lord knows it's taken me a few years of false starts to get at the correct combination of functions. Though, I learned plenty along the way, much of which helped me generalize to all polygons from the square case a friend solved at my behest a week or two ago.

Here's hoping this is an interesting, unique new solution that's viable and notable. (One can hope!)

I retract the above equations. At the behest of someone on another site, I checked in Wolfram Alpha at a few data points. While it appears to work for the Square case (where the coefficients and corrective term basically cancel out), it doesn't work for other cases, but is slightly off. I think I've got the coefficients wrong. Will have to poke around a bit more in the maths to see if it's possible to get a technically correct exact solution.

The graphs were so close as to fool me into thinking they were exact for all cases. Will get back to you if/when I get a technically correct solution. 'Til then... I still believe there is a valid function, since the Square case is technically correct @ 1/(Abs[Sin(x)]+Abs[Cos[x]]) or 1/(Abs[Cos[x]]+[Abs[Cos[x-(Pi/2)]]]). Just need the technically correct coefficient... will work on it as I've got some time. But, for now, the incorrect versions are darned close! ;o) Enough to fool most people (including me, apparently).

Depends what you accept as "a general equation" and what is "a plot". For example, under the $l_1$ metric, the equation of what is perceived as a circle ( points having the same distance to a center) ends up looking like a square. Now would that count as genuine plot? Or, are we only allowed the Euclidean metric for plotting? Also, is an answer containing a limit acceptable? For example $$x^{2n}+y^{2n}=r^{2n} \lim_{n \to +\infty}$$ is a square ( or is it? ) see this for $n=18$

Also is the equation implicit in x and y or polar and parametric plots are also allowed?

How's this (Mathematica code)? It gives the n-gons inscribed in the unit circle, with vertices at the nth roots of unity.

A cheap trick: Take an equation that represents the union of the extensions of the polygon’s sides and add a domain-limiting term to both sides.

This obviously generalizes to polygons that are affine images of cyclic polygons, i.e., one whose vertices all lie on an ellipse.

In the context of this question you may define for a given number $n$ some (Fourier) coefficients by these sensible equations (as you have asked for): 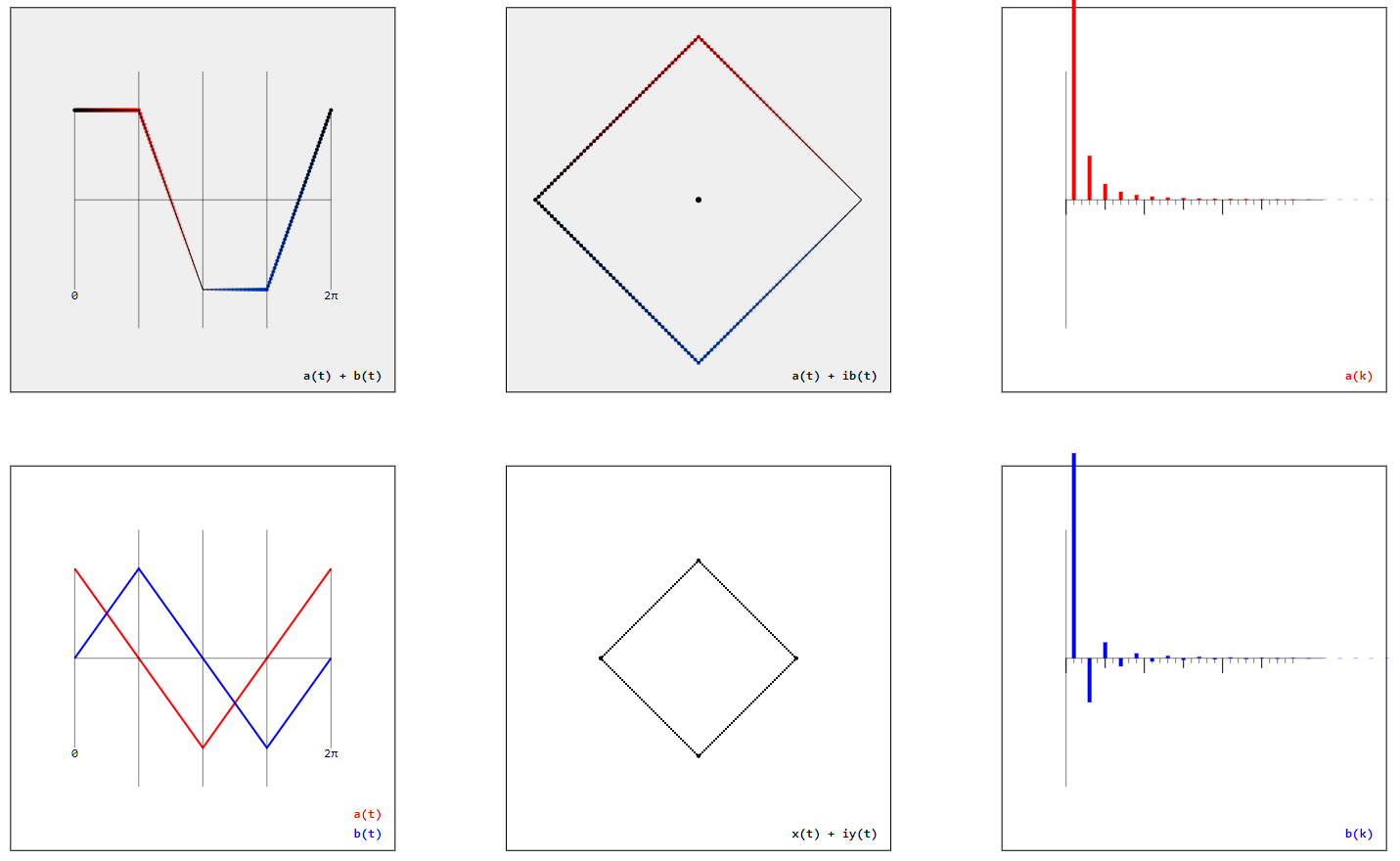 1
Polar equation for a Heptagon
1
equation of a regular polygon in polar coordinates
0
plotting regular hexagon on a cartesian plane
86
Calculating the volume of a restaurant take-away box that is circular on the bottom and square on the top
20
Equation of a rectangle
3
Formula to create a Reuleaux polygon
3
Limit of the sequence of regular n-gons.
6
Polygon sine waves
4
Square inside a Polar coordinate system
4
Explain Triangle perimeter in polar coordinates
See more linked questions