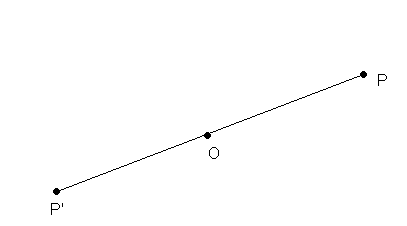 In the above image, you'll see that I'm taking point P and moving it to P'. There are, in my mind, two ways I could do this--either by reflecting P on a line through origin O, or by rotating (a half-turn) P about origin O.

If P were, say, a figure, reflecting it and rotating it would not give the same result (reflections would "invert" the figure, so to speak). But since P is solely a point...what's the difference? Points are just that--points--and therefore non-"invertable"--and hence I don't see a difference between half-turn rotation and reflection of points. But is there one?

I think a short answer might be this: points don't have any intrinsic characteristic other than their location. So, the transformations you described simply leave $O$ in place, and there is nothing different about $O$ before or after the transformations. Still, I'd like to digress a bit further, below.

If you're willing to jump to coordinate geometry for a moment, one way to express this in terms of linear transformations of the plane is the following.

Suppose your line is in the plane with $O$ at the origin and the line coinciding with the $x$ axis. (I'll be talking about transformations acting as matrices on the left of column vectors.)

This effectively means that the $x$-axis (which we placed our line on) just has its direction reversed. That can be accomplished with either of those tranformations, and in fact by any transformation of the form $\begin{bmatrix}-1&a\\0&b\end{bmatrix}$, since they all have the $x$-axis as an eigenspace for eigenvalue $-1$ as well.

1
Given point $P=(x,y)$ and a line $l$, what is a general formula for the reflection of $P$ in $l$
0
How do I compose isometries algebraically?
2
Get the points of a moving body on a curve each T seconds
0
Do Reflections About Lines in 2-D Preserve Angle Measure for Figures?
0
Single transformation equivalent with the following composition
1
In 3D, reflecting $\pi$ about a line is the same as reflecting about a plane followed by an enlargement
1
Three lines and three rotations using reflections.