What 'model' and 'plane' mean in hyperbolic geometry?

I'm new to geometry, and am confused by the difference between hyperbolic plane and hyperbolic model.

Moreover, there exist several hyperbolic models such as poincaré disk, poincaré half-plane. None of them "seem" to have negative curvature (they do not look like a saddle). So what I think is that the hyperbolic model is like a framework where distance, geodesic, and something other like these can be easily defined and computed, and is easy to visualize, but hyperbolic plane is hard to visualize in our 3D Euclidean space. I don't know whether I understand it correctly. The difference between the model and the plane and their meaning really confused me.

In differential geometry, a hyperbolic plane is a complete, simply-connected Riemannian $2$-manifold equipped with a metric of constant negative (Gaussian) curvature. By scaling the metric, we may assume the curvature is $-1$; often when people say hyperbolic plane they're assuming $K \equiv -1$. The rest of this answer assumes $K \equiv -1$.

It's possible that a hyperbolic model in the sense of the question is what I've called a hyperbolic plane above. There are a number of standard models. The first three below naturally sit inside Minkowski three-space, the real Cartesian three-space equipped with the metric $dx^{2} + dy^{2} - dz^{2}$. 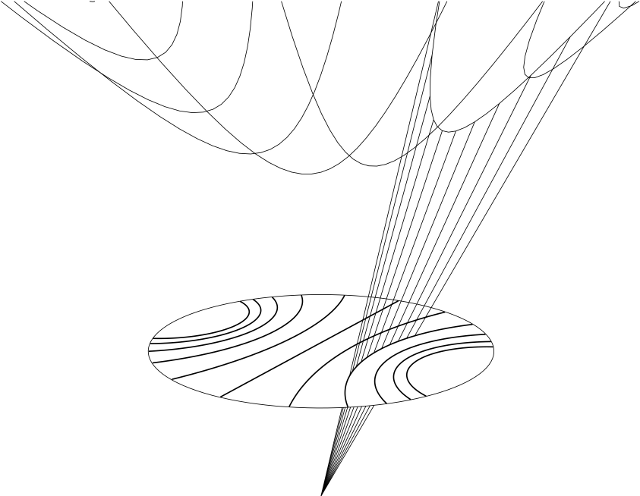 Curvature is a measure of angular defect per unit area in geodesic triangles. Qualitatively, a surface has negative curvature if the total interior angle of a geodesic triangle (enclosing a topological disk, which is automatic in the hyperbolic plane) is smaller than $\pi$. Given that hyperbolic and Euclidean angles coincide in the conformal models, and that geodesics are arcs of circles, it's visually plausible that the conformal disk and half-plane models have negative curvature.

If we represent a region of the hyperbolic plane as a surface in Euclidean three-space, we obtain a surface having "saddle-like" geometry at each point. The best-known examples are surfaces of rotation, especially the pseudosphere, and surfaces with helicoidal symmetry such as Dini's surface.

A hyperbolic circle of hyperbolic radius has hyperbolic circumference $2\pi \sinh r = \pi(e^{r} - e^{-r})$. Particularly, circumference grows exponentially with radius. The theorem of Hilbert mentioned asserts that the entire hyperbolic plane cannot be represented, even allowing self-intersection. Qualitatively (thinking of crocheted models that start like a saddle and grow outward radially), a hyperbolic disk is "floppy", and the larger the radius, the more area must be accommodated in a Euclidean ball whose Euclidean radius grows like the hyperbolic radius of the disk; "Euclidean space just can't keep up".

As noted in the comments, however, a hyperbolic disk of arbitrarily large hyperbolic radius can be isometrically embedded in Euclidean three-space. One method is to use Dini's surface, taking the edge of the disk to lie on the edge of the surface, and taking the center to lie "exponentially far away along the horn", so that the disk is tightly wrapped around the "axis".

Coda: Hyperbolic geometry also overlaps synthetic geometry. Euclid's parallel postulate is replaced by another, equivalent to "Given a line $\ell$ and a point $p$ not on $\ell$, there exist two lines through $p$ that do not meet $\ell$." Pat Ryan's Euclidean and Non-Euclidean Geometry is an accessible treatment, including the hyperboloid model and the necessary geometry of Minkowski space, and requiring little more than one semester of linear algebra.

Not the answer you're looking for? Browse other questions tagged geometry differential-geometry riemannian-geometry hyperbolic-geometry or ask your own question.