Why are Tensors (Vectors of the form a⊗b...⊗z) multilinear maps?

In our linear algebra course we defined the Tensor Product between two vector spaces as an Operation so that this Diagram commutes:

We constructed the tensor product between two vector spaces $U$ and $V$ as the quotient of the free space on $U \times W$ and a certain subspace $R$. However as far as I know this construction is not really that important, important is that it obeys the above diagram, so an alternative construction would be equally suitable.

Now I have seen multiple posts on the math and physics stack-exchange that seem to define Tensors as multilinear maps.

Of course I am very aware that multilinear (or in this case bilinear) maps form a vector space and I suppose that this vector space could somehow be isomorphic to $U \otimes V$. And I see that the concept of a tensor is very closely linked to multilinear maps (especially the multilinear map $\iota$).

1 up to a unique isomorphism

Given any two vector spaces $U,V$ over the same field $\Bbb{F}$, we can define their tensor product $U\otimes V$ via the universal property you mention in the first paragraph. In the finite-dimensional case, we have the following canonical isomorphism:

Hopefully this clears up the issue of what the isomorphism are (I leave it to you to verify these really are isomorphisms). For your final question of whether tensors are multilinear maps, well, I feel like now we're getting into a terminology issue. To me a tensor is an element of a tensor product of two vector spaces. What is a tensor product? From the universal property, we know such a construction is unique up to a unique isomorphism (as always). Therefore, the question of what a tensor is, is rather unimportant I feel.

If you use the realization of a tensor product as a quotient of some free module, then your tensors are elements of that space. If on the other hand you're dealing with finite-dimensional spaces, then you can equivalently define tensors as certain multilinear maps, so to you a tensor could be a multilinear map.

My Introduction to Tensors and Opinion:

The first definition of tensor I encountered was the one with multilinear maps (as introduced in Spivak), and I found this straight-forward, and I'm glad this is the first definition I learnt, because I don't think I would have been able to digest the abstractness of the universal property definition. Also, this definition is rather "concrete", and very easy to state given only basic knowledge of linear algebra (i.e just knowing what a vector space, dual space and multilinear means) so it made it easy for me to see what tensors are and work with them very easily, even though that's simply not that relevant (it's just one of those things which gives one some comfort when first learning a new topic). This concrete realization of tensors meant I didn't have to take a long abstract-algebraic detour in the middle of my advanced calculus and physics course into universal properties, quotient vector spaces and so on. This context hopefully puts it into some perspective for why people introduce tensors on finite-dimensional spaces as multilinear maps, and hence say that "tensors are multilinear maps".

Also, on a real-vector space, such as $\Bbb{R}^n$, two very common and important examples of tensors are the inner product (a $(0,2)$ tensor) and the determinant/volume form (a $(0,n)$ tensor). These are already conveniently given to us in the form of multilinear maps. So on top of wanting to avoid excessive algebraic detours, the fact that very important tensors (and by extension, tensor fields on manifolds) are already presented in multilinear fashion further motivates the multilinear definition one usually encounters in differential geometry/physics, hence the frequently encountered statement "tensors are multilinear maps".

To consider tensor products as a multilinear functions you need to understand the roll of duality.

It is known that the set of linear transformations $V\to\mathbb F$ is also a vector space which is dubbed the dual of $V$ with symbolic name $V^*$. This is finite dimensional when $V$ is. Its basis can be describe by the linear transformations $\beta^k:V\to\mathbb F$ defined by setting $$\beta^k(b_l)=\delta^k_l,$$ where the $b_1,...,b_n$ generate $V$, so for a generic linear combination $v=v^sb_s$ ($s$-sum convection) one has $$\beta^k(v)=v^k.$$

But there is also the set of linear functionals $V^*\to\mathbb F$, which one of them can be stablished by fixing a vector $v_0$ and by taking a elements $f\in V^*$ one maps $f\mapsto f(v_0)$.

So, for each basic element of $V$ one induce $V^*\stackrel{b_i}\longrightarrow\mathbb F$ and that sets an isomorphism $V\cong V^{**}$. 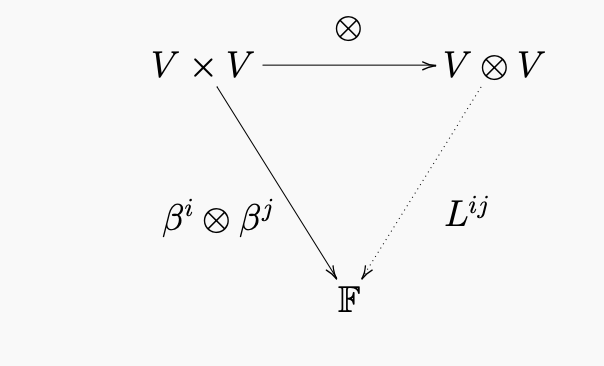 With that experience at hand you could settle the case with $V\otimes W$ of two finite dimensional vector spaces.

Not the answer you're looking for? Browse other questions tagged linear-algebra tensor-products tensors multilinear-algebra or ask your own question.

2
Is a bilinear form a tensor or a scalar "output'' of that tensor?
0
tensor definition confusion as multilinear map