To clarify what distance and penetration depth means:

Thus 1 and 2 are actually identical and can be considered a signed distance. The result required is the offset from the reference cone so that the segment is outside the cone and just touching.

The idea is to project $P_0P_1$ along $\vec C$ until it gets in contact with the cone. To reduce the complexity:

You should get this scene when view from the top 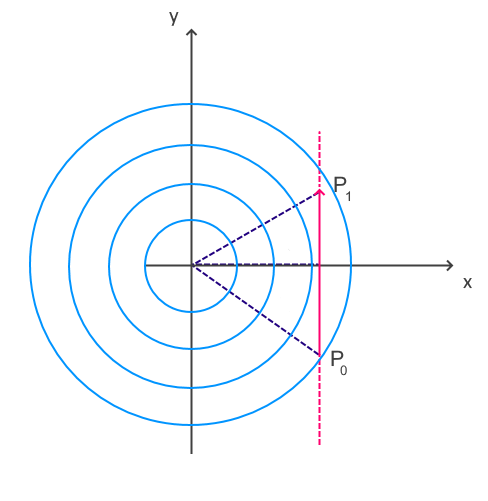 Transformed segment lies in YoZ-parallel plane. This plane is creating hyperbolic section on conic surface. We can find the shortest distance along $z$ between hyperbola and line segment 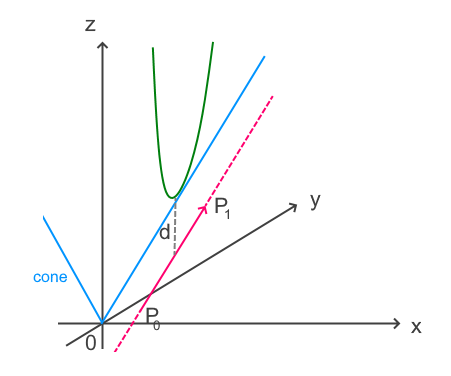 which should give the answer. Closest points would either be segment ends or a witness point of hyperbola vertex projection onto the segment. There are some corner cases to be handled though like segment being parallel to generatrix of a cone or dealing with axial section.

1
Find a vector from the origin that is a known length and is orthogonal to the plane defined by its endpoint and two other known points?
3
A trigonometric problem when calculating distance to the boundary of a convex hull
2
Point inside right circular cone
1
Shortest rotation of vector around cone
2
Check if an $n$-dimensional segment intersects with an $n$-dimensional sphere
2
Calculating intersections of a "2D cone" and segments
0
Could not understand the physical meaning?
1
$(p, \theta)$ values of lines intersecting the line segment from $(-l/2,0)$ to $(l/2, 0)$