Is there a method converting implication into equality?

I'm working with an algebra which has lattice structure amended with several other operations and axioms. I have couple of axioms which are expressed as implications, for example, conditional distributivity

Is there a way to express it as a set of pure equational axioms? Specifically:

Classes defined by implications of the type $$p_1=q_1, \ldots, p_k=q_k \Rightarrow u=v,$$ where $p_i, q_i, u, v$ are terms of the relevant signature are called implicational classes, or quasi-varieties.
Every variety (or equational class) is a quasi-variety, in a trivial way.

I'll give you a more or less trivial example of a quasi-variety of lattices which is not a variety.
In view of the previous paragraph, it's enough to give an example of a class of algebras defined by an implication between equalities but not closed under the formation of homomorphic images.

Hence, the class $\mathcal K$ consists of those lattices which either are not modular, or are distributive.
On such example is the lattice $\mathbf L$ below. Since elements $0, b, c, d, 1$ make a pentagon, it's not modular, and so it satisfies the implication. 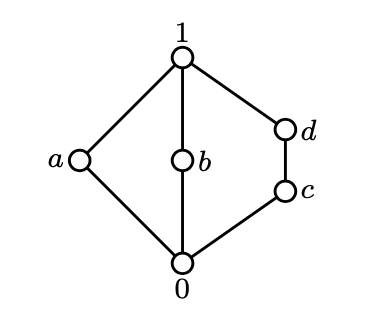 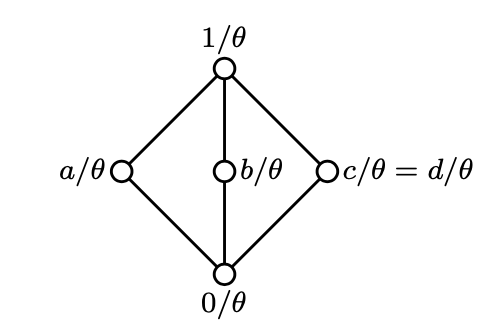 This is a modular, but not distributive lattice, and so it doesn't satisfy the implication.

So there is no such method for lattices, in general, and consequently, neither there is for algebras in general.

About your last bullet point, there exist, indeed, varieties for which all sub-quasi-varieties are varieties too.
This is, for example, the case of $\mathcal M_{\omega}$, as proved in
Grätzer and Lakser, Algebra Universalis, 8 (1978) 135-135.
I don't know of any systematic way of telling whether or not a variety has this property.

Not the answer you're looking for? Browse other questions tagged logic lattice-orders universal-algebra or ask your own question.

3
Do all equational theorems of Boolean algebra not involving complementation also hold for all bounded distributive lattices?
3
Confirmation needed of the fact that subcategory $\mathbf{Lat}$ is not full in $\mathbf{Pos}$
3
Dual atoms of the lattice of varieties
5
Are there any free or fascist boolean algebras?
1
Confusion about definition of topology
12
Is a poset an algebra?
3
Proving that a "Boolean" algebra containing an element $i$ such that $i\land0=1$ is not distributive.
1
Is there a generalization of universal algebra that can express multi-valued functions?