How to determine the parameters of a linearized model when the line has negative slope and intercept?

I have the following data:

The data, from both sample A and sample B, were adjusted to the following model in its linearized form, to determine the value of the parameters $k$ and $q_e$: $$\ln\left(q_e-q_t\right)=\ln q_e-kt \rightarrow \rm linearized\ form$$ $$q_t=q_e\left[1-\exp\left(-kt\right)\right]\rightarrow \rm original\ model$$ I did the regressions and these are the results: 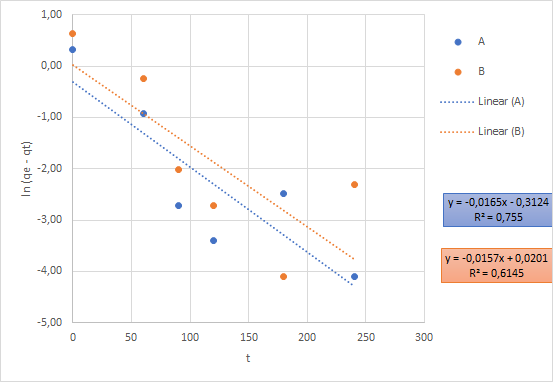 According to my mathematical knowledge, a straight line is defined by the equation $y = b+mx$. With that the calculation of the parameters $k$ and $q_e$ would be:

Following this procedure, I estimated the values of $k$ and $q_e$ for each sample and then I plotted it in a non-linear form: 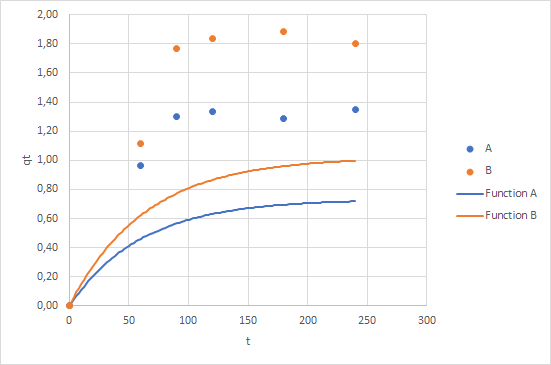 Looking at the graph, I believe that I made a mistake in one of my procedures and I would like your help, because I believe that the non-linear curves should be closer to the points.

It is difficult to reproduce your calculus and spot the "mistake" because your calculus is not made with sufficient accurency and the numbers in the tables are too roughtly rounded.

Nevertheless, it seems that the main cause of trouble in your method is the initial guessing of qe=1.35

A better accurate calculus is shown below, starting with qe=1.35053

The steps of the numerical calculus are given with a sufficient accuracy to allow everybody to check.

The above initial guess for qe is not quite satisfying but better than before. That is why the fitting of the curves appears much better.

In fact your method involves an approach by trial and error to adjust the value of qe. This is very tiresome. Generally one use some non-linear method of regression.

Not the answer you're looking for? Browse other questions tagged regression parameter-estimation linear-regression or ask your own question.

1
Consequences of fitting a regression model with an intercept term when it should be through the origin
2
Simple Linear Regression: why do we estimate conditionla mean when we can estimate the parameters?
1
Calculating Slope of Line of Best Fit with Y-intercept of 0
1
Logistic Regression Adjusting for True Population Proportion
0
Linear regression model when intercept is known
0
How to obtain 3 parameters from a linearized model?
0
Least square estimators for “no slope” and “no intercept” models.