Does a straw with two branches have 2 holes? 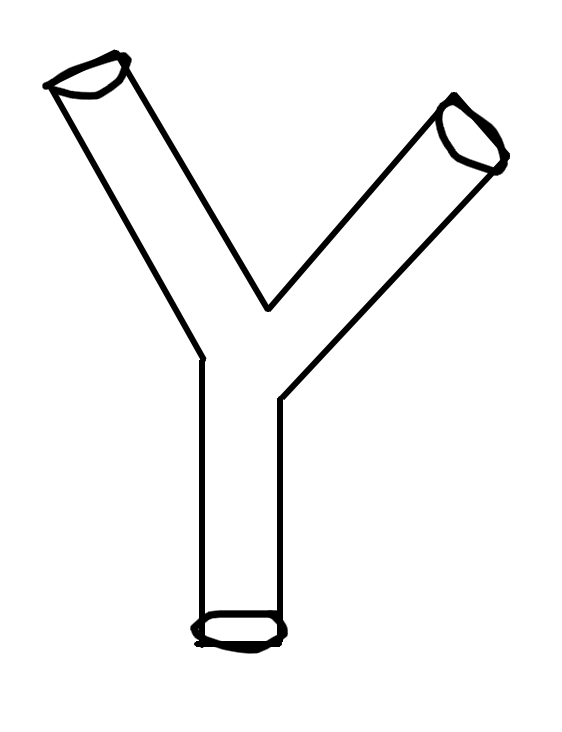 Yes, it has two holes. Here's one way to think of it. Let's take an ordinary "double torus", like a donut with two holes in it. 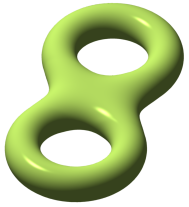 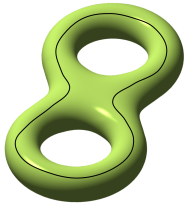 That upward hollow growth is the bottom part of your straw, or the waist part of a pair of cutoff trousers.

We want the growth on the bottom, to match your straw picture, so turn the torus over. Now add fertilizer to the other side: 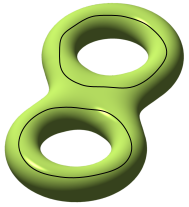 This time the torus grows upwards in two hollow tubes that are like the sleeves of the trousers or the arms of your straw.

Another way to think about it: a torus has the property that you make a cut all the way through it without cutting the surface into two pieces. On a sphere this is impossible, any cut divides the sphere in two. But on a torus you can do it by having the cut go through the hole:

But you cannot make two such cuts without dividing the torus into at least two pieces.

With a double torus, you can make two cuts without cutting the surface into two pieces, as long as you have one cut go through each hole: 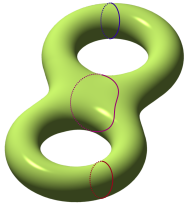 You can make any two of the indicated cuts, and the double torus will stay in one piece. But if you make all three cuts, it falls apart.

Now what kind of thing is your straw? You can indeed make two cuts in it without it falling apart, if you send the two cuts through the two holes: 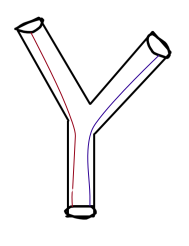 The blue cut goes down one hole, and the red cut down the other.

You could also have made one of the cuts go down one arm and back up the other arm. The analogous cut on the figure-8-shaped double torus is to cut through the middle section of the figure-8, the purple cut in the double-torus picture above.

As with the double torus, you can make any two of the indicated cuts, and the straw will stay in one piece. But if you make all three, it falls apart: 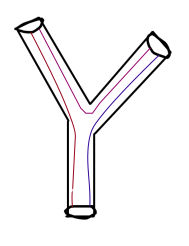 12
For an $n$-dimensional object, how many types of holes are possible?
11
What role does differentiability play in Topology?
1
What does path-connectedness of $I$ have to do with this at all?
0
d1 and d2 metrics on C[0,1] - topologically inequivalent. Why?
2
"Topological Equivalence" of Double Torus and a Torus with another hole
0
Characterizing properties of the given set (regression coefficient). Is it convex? Does it have holes? Is it compact?
11
Meaning of "holes" counted by homology groups