Name of this polyhedron with 17 faces

I recently saw a jungle gym in a playground constructed with ropes and small vertices. It formed a really strange polyhedron that I had never seen before. I've searched all over for it, but cannot find it. 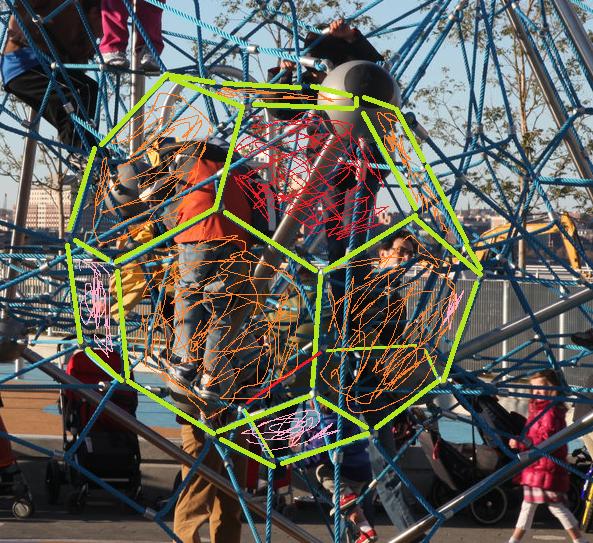 The polyhedron is constructed as follows:

Topologically the polyhedron is a truncated pentagonal bipyramid: the pentagons are the truncated degree-$5$ vertices and the "squares" are the truncated degree-$4$ ones. But the photo shows two irregularities: the top-left and bottom-right hexagons appear slightly puckered and the lengths of edges adjacent to a pentagon vertex (which I will call type A edges) are slightly longer than the other edges (type B). There is no requirement for the faces to be flat or edge lengths to be equal because you want to grip the edges, not the faces, of this physical construct. As such, the polyhedron's "regularity" is but a trick of the eye.

It is possible to achieve regular squares, regular pentagons, just-regular-enough hexagons and a round shape simply by making type A edges $10\%$ longer: 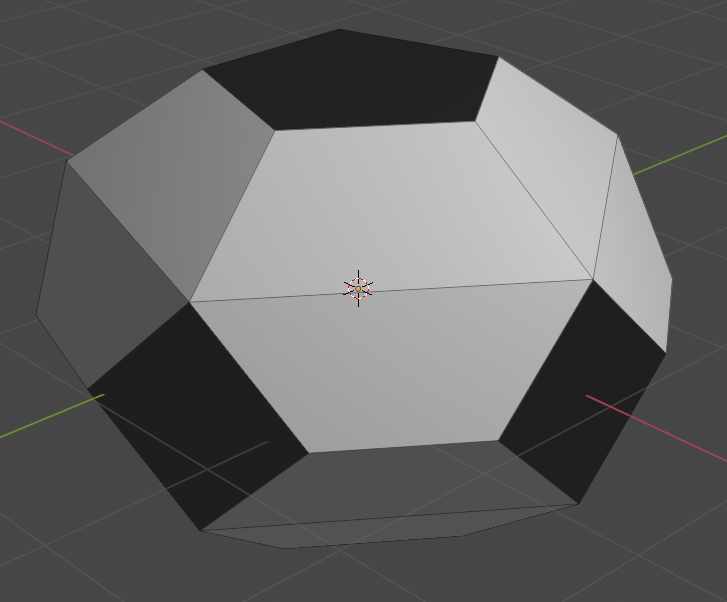 No such polyhedron can have all its faces be regular. One way to see this is to look at the list of Johnson Solids and note that none of them match your description.

You might describe this polyhedron as a near-miss Johnson Solid, though it doesn't seem to be on Wikipedia's list or this one.

Edit: Here's a proof that if the hexagons and pentagons are regular, then the square faces aren't even faces - the vertices won't be coplanar.

First, observe that the truncated octahedron exists, which is effectively this solid with the bottom pentagons converted into squares. Fix two adjacent hexagons near the bottom square, and consider what happens when we widen the angle between them from $90^\circ$ to $108^\circ$ - after some thought, it should become clear that their shared vertex moves "inward" relative to the adjacent two vertices lying on the "equator" of the polyhedron. As this happens (along with the vertically reflected pair of hexagons above), the four points will move out of alignment with each other, and so the face will no longer be any kind of quadrilateral.

(The intuitive idea here is that at most one of a triangular, square, pentagonal, etc., base will be "lucky" enough for the gaps to be nicely coplanar, and the square has already filled that role, so a pentagonally-symmetric solid can't work.)

Edit 2: Here's another proof that the faces can't all be regular.

Suppose otherwise. Let's glue pyramids onto the squares so that the hexagons become extended into trapezoids; the angles of these trapezoids will be $60^\circ$, with the portion lying on the pyramid being an equilateral triangle. If we have a square pyramid with equilateral triangular faces, we're looking at half an octahedron. But then the equator makes a $90^\circ$ turn at every square, so we can't have $5$ of them.

Not the answer you're looking for? Browse other questions tagged geometry terminology polyhedra solid-geometry or ask your own question.

19
What property of certain regular polygons allows them to be faces of the Platonic Solids?
0
Help TOm to find the number of black, white and green pieces?
0
Find the edge angle of a dodecahedron using spherical trigonometry?
5
Apparent existence of a semi-regular polyhedron, but that I cannot find in any table.
0
How to apply Euler's formula to polyhedra with pentagons and hexagons
1
Using Euler's formula with an icosidodecahedron
2
Which geometric shape of icosahedron origin has 180 faces 270 edges 92 vertices?
13
Why does a convex polyhedron being vertex-, edge-, and face-transitive imply that it is a Platonic solid?
3
How to construct a chamfered dodecahedron with equilateral or coplanar faces?