Please, would someone be so kind and explain what exactly happens when Singular Value Decomposition is applied on a matrix? What are singular values, left singular, and right singular vectors? I know they are matrices of specific form, I know how to calculate it but I cannot understand their meaning.

I have recently been sort of catching up with Linear Algebra and matrix operations. I came across some techniques of matrix decomposition, particularly Singular Value Decomposition and I must admit I am having problem to understand the meaning of SVD.

I read a bit about eigenvalues and eigenvectors only because I was interested in PCA and I came across diagonalizing a covariance matrix which determines its eigenvectors and eigenvalues (to be variances) towards those eigenvectors. I finally understood it but SVD gives me really hard time.

Another thing that helps to build the intuition is to derive the equation yourself. For any matrix $A$ of size $n\times m$ the row space and a column space will be subspaces of $R^m$ and $R^n$ respectively. You are looking now for a orthonormal basis of a row space of $A$, say $V$, that gets transformed into the column space of $A$ such that it remains an orthonormal basis (in the column space of $A$). Let's call this transformed basis $U$. So each $v_i$ get's mapped to some $u_i$, possibly with some stretching, say scaled by $\sigma_i$: $$ Av_i = u_i \sigma_i $$ In matrix notation we get: $$ AV = U \Sigma $$

In another words, if you think of matrices as linear transformations: multiplying a vector $v \in R^m$ by $A$ gives a vector in $R^n$. SVD is about finding such a set of $m$ such vectors (orthogonal to each other), such that, after you multiply each of them by $A$ they stay perpendicular in the new space. 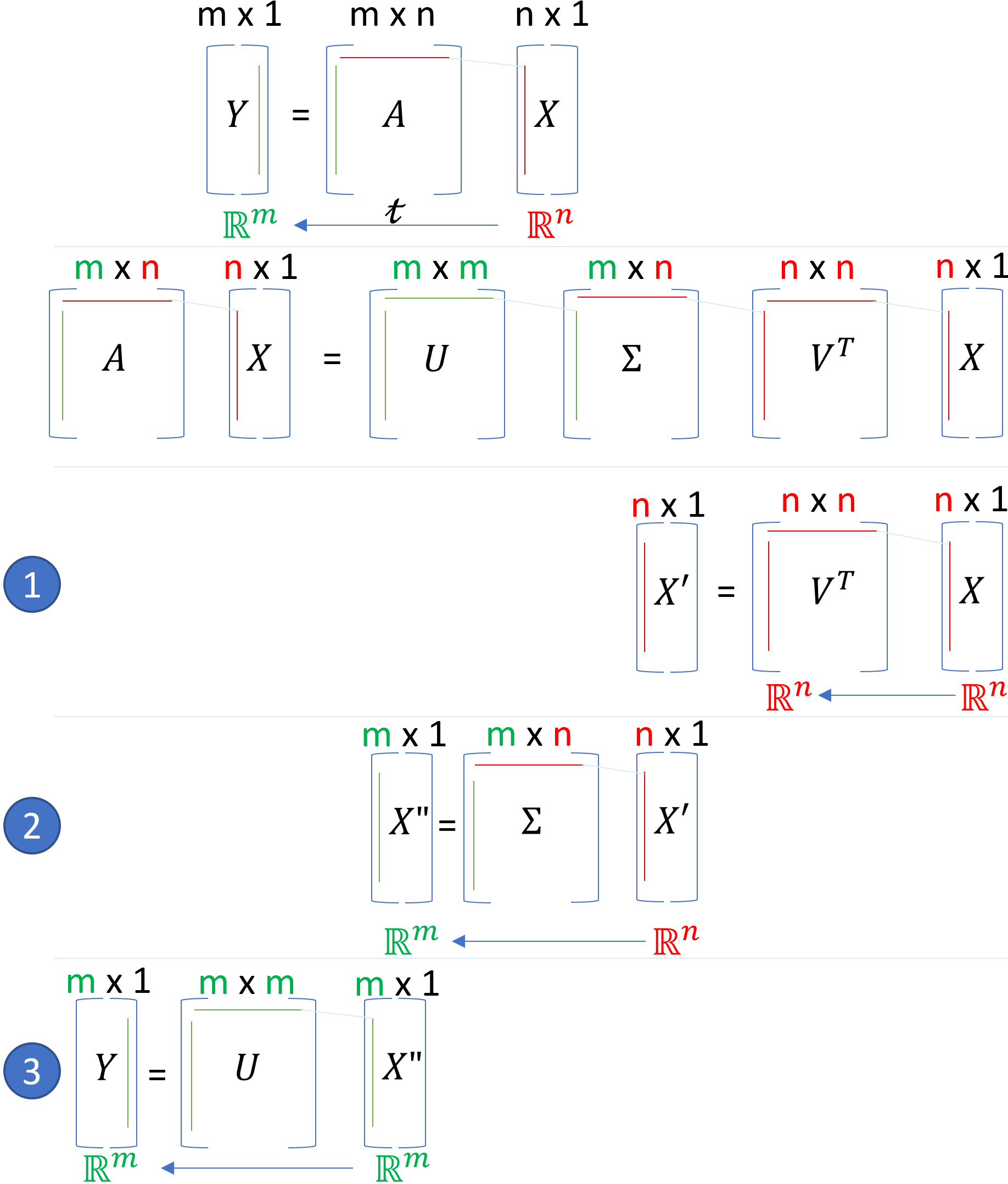 The inserted image hopefully adds to the answer of TheSHETTY-Paradise.

It shows the three operations:

(2) a scaling and a change of dimension and then

(3) a rotation in the image space

The other image shows all the possible shapes of $\Sigma$ 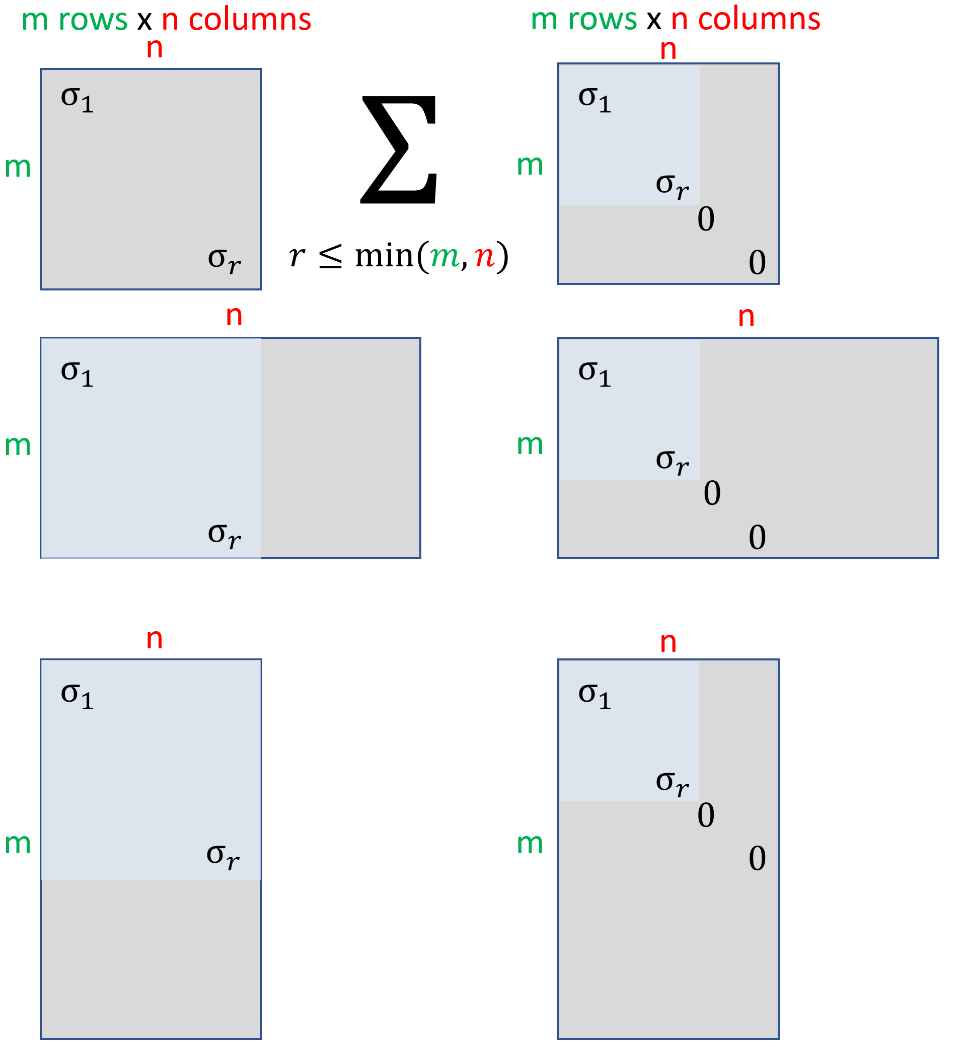 I visualized SVD for myself using the following plot: 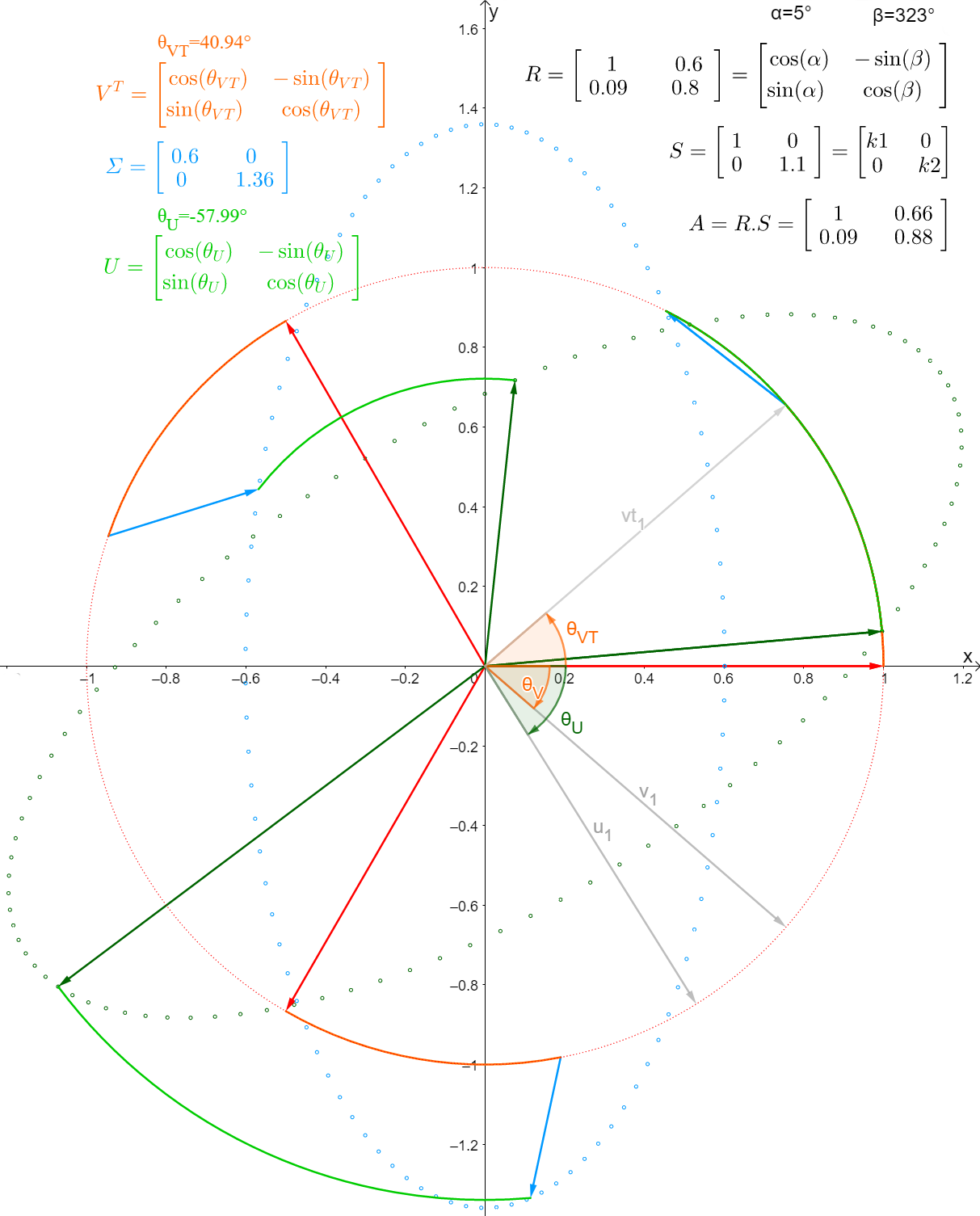 There is a Geogebra app under the link below,

you can play around changing the matrix and seeing the effect on the SVD: singular value decomposition visualized

There is another geometric interpretation of the singular values of a matrix is the following. Suppose $A$ is an $m\times n$ matrix (real valued, for simplicity). Think of it as a linear transformation $\mathbb R^n \to \mathbb R^m$ in the usual way.

So the mapping $x \to A \ast x$, when restricted to the column-space of $A'$ does not have a null space, and thus establishes an isomorphism between the row-space and the column space of $A$.

So essentially a matrix $A$ of rank $r$ is in the most general form an isomorphism between to specific $r$-dimensonal subspaces of $\mathbb R^n$ and $\mathbb R^m$ respectively.

The remarkable fact then expressed by the SVD theorem is that one can find two orthonormal bases for these two $r$-dimensional spaces such that the linear mapping $x \to A \ast x$ can be described by a diagonal matrix with non-negative diagonal entries on these spaces. This comes from the spectral theorem applied to the semi-positive matrices $A' \ast A$ or $A \ast A'$.

Maybe it helps to think in terms of linear transformations rather than matrices. Suppose $V$ and $W$ are finite dimensional inner product spaces over $F$ (where $F$ is $\mathbb R$ or $\mathbb C$) and suppose that $T:V \to W$ is a linear transformation. Then, according to the SVD theorem, there exist orthonormal bases $\alpha$ and $\beta$ (bases of $V$ and $W$, respectively) such that $[T]_{\alpha}^{\beta}$ is diagonal.

Trefethen explains a nice geometrical interpretation of the SVD in his book Numerical Linear Algebra.

Answer referring to Linear Algebra from the book Deep Learning by Ian Goodfellow and 2 others.

Not the answer you're looking for? Browse other questions tagged linear-algebra matrices matrix-decomposition svd or ask your own question.

4
A number of SVD components; understanding the relation
3
How to rearrange the singular value decomposition (SVD)?
3
Intuitive explanation of the singular values
0
Relation between system solution and its svd