I am currently stuck at a proof where to my understanding the key step is to argue how the fact that if in a subgraph, the degree of each vertex is at least the size of the largest clique in the graph $G$, $d(v) \geq \omega(G), v \in V(G)$, then the original assumption of ... is false. My guesses are that

1.) the contradiction is something like: "if $d(v) \geq \omega(G)$, then the subgraph contains a clique larger than the largest clique in the original graph".

2.) contradiction can be constructed somehow with pigeonhole principle from the fact that i.) the vertex set $V(G)$ is finite, ii.) self-loops are not allowed, iii.) each vertex $v$ is connected to $\omega(G)$ other vertices.

Edit: The graph $G$ is an interval graph.

"if $d(v) \geq \omega(G)$, then the subgraph contains a clique larger than the largest clique in the original graph"

Above statement is not true

Counterexample: Please see the below graph. It contains a subgraph $\{1,2,3\}$, where the degree of each node is $4$, i.e. larger than the maximum clique size in the original graph, but the graph G does not have clique larger than size 3. 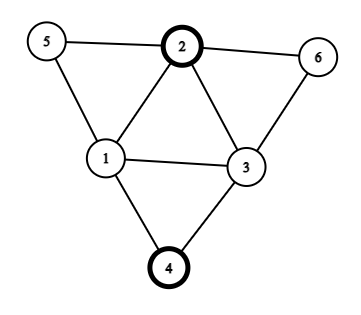 Not the answer you're looking for? Browse other questions tagged combinatorics graph-theory pigeonhole-principle or ask your own question.

1
Proofs involving subtrees of a tree
11
A graph problem
1
If a graph G is the union of $n$ cliques of size $n$ no two of which share more than one vertex, then $\chi_f(G)=n$. $\omega(G)=n$
3
Minimal Spanning Tree for Graph $G=(V,E)$
0
Discrete math - graph theory questions: vertices, cliques, degrees
0
Is a forest a tuple, a set or both?
1
Proof about $k$-partite graphs in which all maximal cliques are size $k$ and a way to remove edges so that all maximal cliques remain size $k$