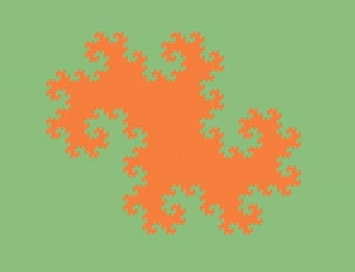 Can you identify this fractal--if in fact is has a name--based either upon its look or on the method of its generation? It's created in this short video.

It looks similar to a dragon fractal, but I don't think they are the same. Help, please?

That is the twindragon. It is a two-dimensional self-similar set. That is it is composed of two smaller copies of itself scaled by the factor $\sqrt{2}$ as shown here: 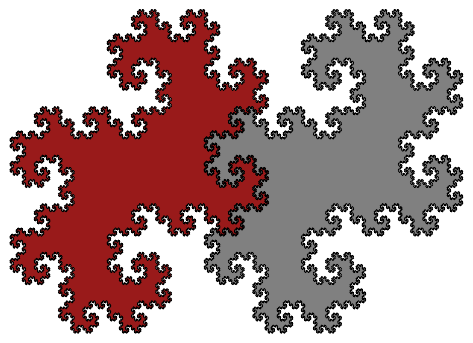 Using this self-similarity, one can construct a tiling of the plane with fractal boundary. Analysis of the fractal dimension of the boundary is also possible, but it's a bit harder.

It's all truly great fun!

22
A way to determine the ideal number of maximum iterations for an arbitrary zoom level in a Mandelbrot fractal
4
Is there any mathematical proof of fractal self-similarity?
9
What is the final shape and the area of this fractal going to be?
4
Box counting method for fractal dimension
2
Does this fractal have a Hausdorff dimension of 1?
3
Is there a technique to exactly calculate the Hausdorff dimension of the border of this fractal?
2
Ultimate Mandelbrot Fractal Zooming
2
Can different fractals have the same fractal dimensoins?