A (geometric?) limit distribution for the "delicacy width" of prime numbers?

[Revised to ask only the second of my two previous questions. Revised again to include the approximate Geometric distribution, and to add another reference.]

A recent Quanta article refers to this paper by Filaseta & Southwick, which is behind a paywall. (EDIT: Presumably, Southwick's doctoral dissertation has similar content with no paywall.) The paper has the following Abstract (italics are mine):

Abstract: We show that a positive proportion of the primes have the property that if any one of its digits in base $10$, including its infinitely many leading $0$ digits, is replaced by a different digit, then the resulting number is composite.

Primes having the italicized property are called widely digitally delicate in the article, which mentions that no example of such a prime has yet been found, in spite of there being infinitely many of them (indeed, a positive proportion).

Now, suppose we define the delicacy width (which I'll just call the "width") of a prime as follows:

This defines the width as a function $W:PRIMES\to\mathbb{N}\cup\{\infty\},$ with $W(p)=\infty$ when the longest such suffix is the entire expansion of $p$; otherwise, $W(p)$ is finite and equal to the number of digits to the right of digit $r$, where $r$ is the rightmost digit that can be altered to change the prime into different noncomposite number.

Examples: All primes less than $97$ have width $0$, because in each case the very rightmost digit (having no digits to its right) can be altered to change the prime into another noncomposite; e.g., $89$ can be changed into the noncomposite $87.$ On the other hand, $97$ has width=$1$ because the $9$ (having one digit to its right) is the rightmost digit that can be altered (to $0,1,3,4,$ or $6$) to change the prime into a different noncomposite -- altering the $7$ cannot accomplish this.

Question: Since the quoted Abstract implies that a positive proportion ($P_\infty$) of the primes have infinite width, does it follow that the remaining primes have widths $(0,1,2,\ldots)$ occurring in respective proportions $(P_0, P_1, \ldots)$ that sum to $1-P_\infty?$ Can it be concluded that all of these proportions are positive? In other words, does there exist a limit distribution $\{P_w\}_{w\in\mathbb{N}\cup\{\infty\}}$ with $(P_0+P_1+P_2+\ldots)+P_\infty=1,$ where

Here are plots I've computed of the distribution of widths among the first $10^n$ primes, for $n=6,7,8,9(\text{blue})$ -- there seems to plenty of "converging" yet to occur, if convergence is indeed what happens: 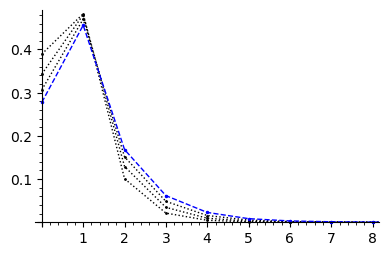 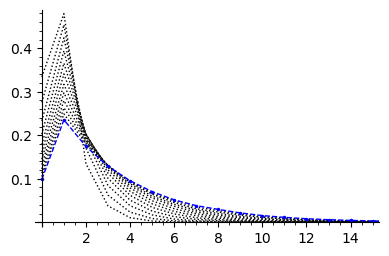 Examining these plots numerically, it appears that among sufficiently large primes, the distribution of positive integer widths (i.e. $0<W<\infty$) is approximately geometric. That is, the width distributions appear to be approximately as follows (taking $P_0, P_1,$ and $P_\infty$ as parameters):

Here's a comparison of the empirical distribution for $n=30$ (blue) from the preceding picture, and a geometric distribution (red) fitted with $P_0=0.09833$ and $P_1=0.2354$ to match the empirical values, and taking $P_\infty=10^{-9}$ just as some small number (known to be positive even though no instance of infinite width has been found among more than $10^9$ primes). At the scale of the plot, the two distributions visually overlap: 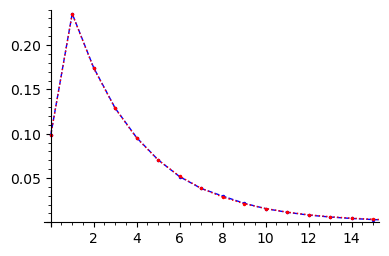 NB: The width of a prime can be seen as the outcome of a sequence of "trials" on the successive digits $d_0,d_1,d_2,\ldots$, each trial asking "Can this digit be changed so as to change the expansion into that of another noncomposite number?" -- if the answer is "yes", then the trial is a "success", otherwise it's a "failure". The width is then just the number of failures before an eventual success (if there is never a success, then the width is infinite). Empirically, it appears that only trials after $d_0$ (i.e. only the trials on $d_1,d_2,\ldots$) can be modelled as "Bernoulli trials", and so give rise to a geometric distribution only for $0\lt W\lt\infty.$

First, let’s dispense with a core misconception: the phrase “a positive proportion of primes” means that

In particular, such a claim does not establish that the fraction above converges a limit, only that it stays bounded away from 0. Typically one establishes this by identifying a specific arithmetic progression that is well-positioned to have the desired property, and then use sieve methods to show that we only need to discard relatively few elements of that progression to ensure the property.

I am not an expert on the methods of the paper, but the Quanta article and other references all cite the use of covering congruences, which strongly suggests that only a lower bound is proved. There may be a separate argument that a limit exists, but I’d expect the authors to make the stronger claim if so.

Now we get to the heart of the question:

In fact, we can prove that $P_k = 0$ for all finite $k$, contrary to the hypothesis in the question. A prime of width $k$ must belong to a pair of primes that differ in only the last $k+1$ digits, and thus differ by $ < 10^{k+1}$. But a standard upper bound sieve argument (similar to twin primes) shows that there are at most $O(x/(\log x)^2)$ pairs of primes that differ by any fixed constant. So the density of primes of width $k$ is $0$, although the convergence rate of $1/\log x$ is really rather slow so you couldn’t possibly have observed it in the sample data you collected.

At this point you may be wondering: but doesn’t this prove that $P_\infty = 1$? The answer is, counterintuitively, no. The reason is that densities of sequences are not the same as probabilities: they are only finitely additive, not countably additive. There are plenty of sequences of sets, each of density $0$, whose union has density $1$. The simplest case is that the naturals are the union of countably many singleton sets, one for each natural number.

For a more interesting case, it is well-known that the proportion of positive integers with exactly $r$ prime factors is $0$ for any $r>0$ (it is proportional to $x (\log \log x)^{r-1} / \log x$, with a constant reminiscent of a Poisson distribution). But that certainly doesn’t mean that most integers have infinitely many prime factors!

Not the answer you're looking for? Browse other questions tagged limits number-theory probability-distributions prime-numbers asymptotics or ask your own question.

17
Help understand the proof of infinitely many primes of the form $4n+3$
1
Prove that there exists infinitely many primes of Digital root $2,5$ or $8$
0
Determining whether the distribution of prime numbers is random or whether is there a pattern to it
7
Recursively palindromic primes. Are they rare birds?
1
Uncountability of Real numbers - fault in counter proof
46
Extending prime numbers digit by digit while retaining primality
1
Is the reverse of a previous prime always smaller?
5
What is the probability that a prime is less than the number formed by reversing its digits?
3
Copeland-Erdős constant: does the cumulative even digit count ever reach or overtake the cumulative odd digit count, and if so, at what prime?