There is a group structure of binary quadratic forms of given discriminant $d$:

The composition of two binary quadratic forms is defined as:

It is easy to see that bunary quadratic forms of discriminant $d$ form a finite Abel group. But how to interpret the composition law? Why does it have to be this way?

I know that binary quadratic forms are closely related to quadratic number fields. Is there an explination from the view of $Q(\sqrt{d})$?

Perhaps the most illuminating way is to transport the class group structure from ideals to primitive binary quadratic forms. Below is a description of the standard maps from section 5.2, p. 225 of Henri Cohen's book $ $ A course in computational algebraic number theory. To me, this is one of the most beautiful examples of transport of structure. 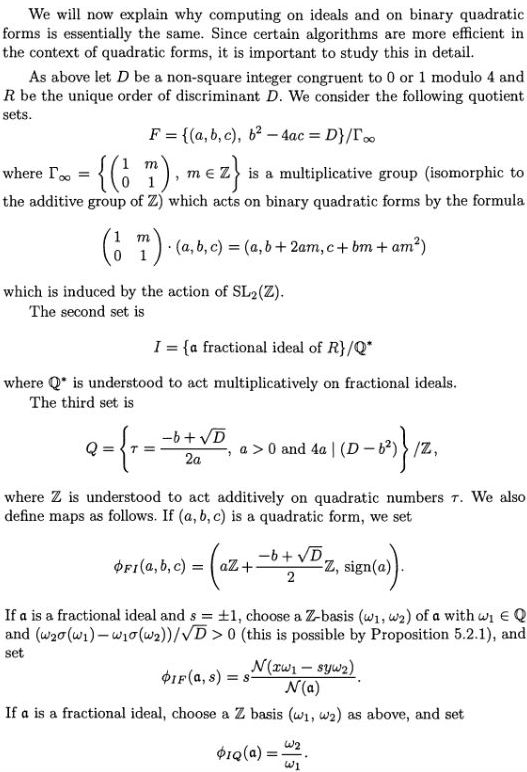 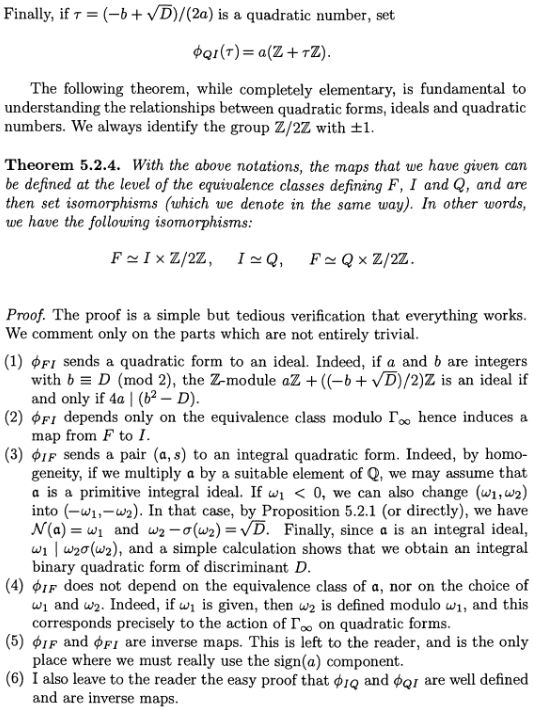 There is a different perspective that took me a while to figure out, and this is a convenient place to write the ideas all down.

I want to give now a sense in which composition is canonical and then exhibit the special case of composition described in the original post within that context. I will not work as generally as Gauss, but rather stick to primitive forms of the same discriminant. What follows could be done in other ways, say with Bhargava's cubes, but I will stick to Gauss.

There are thus infinitely many compositions of $f$ and $g$, and often no apparent canonical choice.

Gauss singles out four different types of compositions, and identifies one as "direct". He shows that $F=(A,B,C)$ is a direct composition of $f$ and $g$ through the matrix $M$ above if and only if the following nine equations are satisfied:

(The non-direct compositions satisfy these equations with sign changes).

My main point is the theorem:

Theorem. All direct compositions of $f$ and $g$ lie in a single $\mathrm{SL}_2(\mathbb{Z})$-equivalence class.

One may hope to find a canonical choice of matrix within each equivalence class, and thereby identify a canonically chosen form to be the composition. One candidate is a pair in which the matrix has $q_1 = 0$.

The following are readily checked:

and then from equations seven through nine, we have

(here, $\Delta$ is the discriminant). Since these latter three are integers, we find that $B_0$ satisfies the congruences mentioned in the original post (in fact, the more general congruences, due to Arndt, that I put in my comment on the OP.)

This all shows that we may find a pair $(F_0,M_0)$ in any class so that $M_0$ has 0 in the lower-left corner, but this choice is not canonical. It is only canonical up to action by the subgroup of $\mathrm{SL}_2(\mathbb{Z})$ consisting of matrices as described in 2. Historically, people have accepted this level of non-canonicalness and have chosen the composition so that the form $F_0$ has middle coefficient which is as small as possible and non-negative. With this choice, we have the Gauss composition operation you describe.

The point is, at the level of equivalence classes, any such choice will give the same abelian group operation on classes. But if we are interested in what happens at the level of forms, say if we study Shanks' infrastructure, then there are other useful and perhaps more canonical choices for the operation than that given by Gauss.

Not the answer you're looking for? Browse other questions tagged number-theory algebraic-number-theory quadratic-forms or ask your own question.