Let $f:\Omega\to\mathbb C$ be holomorphic, where $\Omega$ is a simply connected domain. Suppose we know the values of $f$ on a simple closed curve $\gamma$ contained in $\Omega$.

The Cauchy Integral Formula tells us how to calculate $f(a)$ for $a$ inside $\gamma$. But $f(a)$ is also uniquely determined for $a\in\Omega$ outside $\gamma$ (by the Identity Theorem). For such $a$, is there an explicit Cauchy-like formula for $f(a)$ in terms of the values of $f$ on $\gamma$?

I don't think there are easy ways to do this. It will require at least several steps for all points outside $\gamma$ covered. Certainly, we would not expect any easy formula for $f(a_1)$ in terms of values on $\gamma$ in the figure 1 below. Let $R$ be the region inside $\gamma$.

First, you have already that inside of $\gamma$ is covered.

For any $z\in\Omega$, the above process is repeated finitely many times to reach $z$ from the inside of $\gamma$. (See figure 3).

Practically, this is almost as equally difficult as my previous approach, since $\phi$ encodes how to reach from $a_0$ to any point in $\Omega$. The presentation is more elegant than the previous approach. 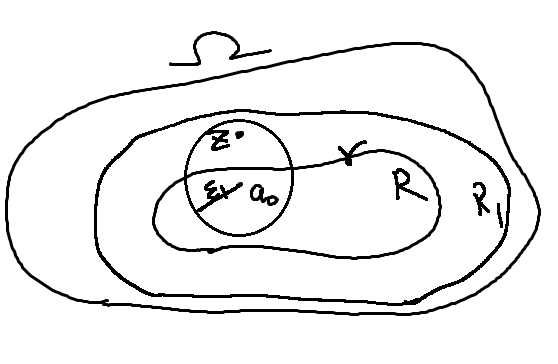 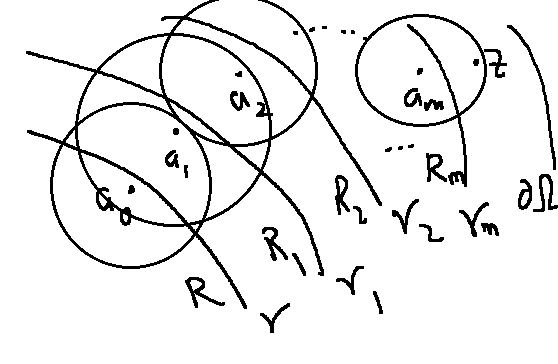