Principal Component Analysis (PCA) has routinely caused me to question my understanding of mathematics, particularly linear algebra. Once again, PCA is present and I would like to engage to the community to confirm my previous formal education and recent references to refresh my understanding. To put it more succinct, is my interpretation of PCA (below), accurate?

PCA, as a dimension reduction technique is employed to reduce a large data-set (i.e. tons of variables) in to a more coherent and smaller data-set, while maintaining most of the 'principal' information.

This is where I am unsure of my understanding: The outputs from PCA - that is, the principal components are then utilized for further analysis. But to what end?

Let us take a routine example, the Iris data-set. Many programming (R, Python, SPS), focus on this data-set as a practical application of PCA. Note the output from Python's scikit-learn module: 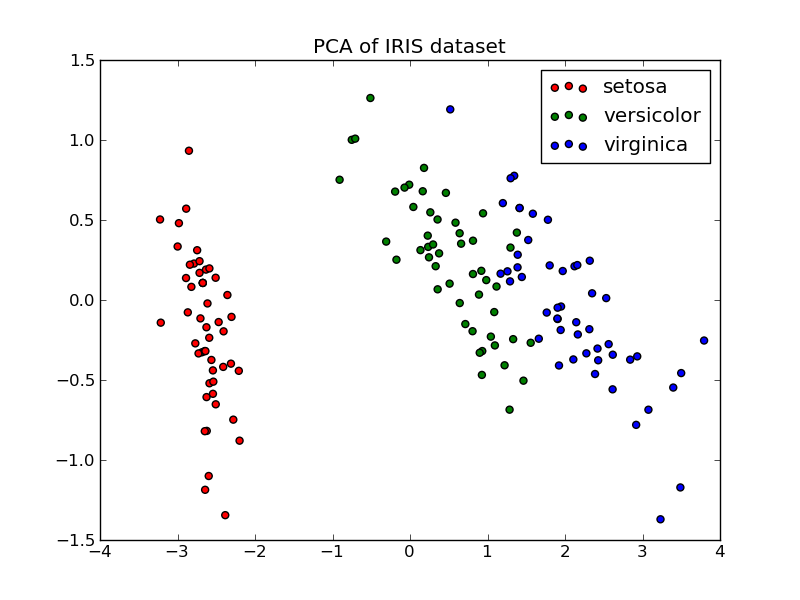 Understanding that "identifies the combination of attributes..that account for the most variance in the data", what can we do with this output? My interpretation - which I belive is flawed is that - in the case of the PCA output (sckit-learn), is that there is a strong correlation between 'virginica' and 'versicolor'. But is that all? Is this merely a processing technique which is then fed to machine learning models? It does not seem that the outputs from PCA (e.g. PC1, PC2, PC3) could be used for feature reduction. Plotting principal components, what information are we getting - since we are not really outputting what the principal components hold? If one were to 'present' the output in 2-d (as with the 'PCA of IRIS dataset', below) - would the intent to be to show that there is a stronger correlation between 'virginica' and 'versicolor'?

I have interpreted PCA as a pre-processing technique that allows one to identify the 'most important' (weighted, influential, etc.) features. Thus,the output I would expect from PCA would by something more akin to:

Take a point cloud and/or a set of vectors (which are the same thing). Move the cloud to have $0$ mean. For every possible direction, determine the variance of the dataset along that direction. Declare the direction of maximal variance to be the first principal component.

Now, project out that component. The residual data is still mean zero, so compute the new direction of maximal variance and that's the second principal component.

Repeat until all variance has been projected out (or the residual variance is some tiny fraction of the initial variance).

So, what is the first principal component? It's the direction of maximal variance. What does that have to do with input features like petal width and petal length? Very little, although if these features lead to large dispersion, you should expect the PCAs to incorporate them. If relevant features appear with low correlation, they will largely land in different components. If they appear with high correlation, they will largely land in one component. Thus, PCs make some progress working with features that are not independent. (Since many real world datasets have lots of implicit correlations, only a few PCs are needed to extract most of the dispersion.)

If you are lucky, the first few PCs are nearly parallel to feature axes, so each can be easily described as "capturing this feature" and "capturing that feature". But many datasets have implicit, unexpected, or unrecognized correlations, that lead to components mixing features. For instance, I would expect petal dimensions to be correlated, so I expect those features to appear mixed into one component.

The dataset you graph suggests that the first principal component is sufficient to discriminate setosa from the other categories, so can be discriminated by a very simple linear classifier. The other two categories are not strongly separated by the first two components. However, a new sample having a very extreme second coordinate in the PCs basis might be assignable to one of the versicolor (near $(-1,1.5)$) or virginica (near $(4, -1.5)$) categories.

If you have 1000 columns, you can run PCA on them and might discover that you can use e.g. the first 20 principal components and still retain 99% of the variance of the data. So then you use the principal components in some machine learning model, but now with only 20 columns.

It might be enlightening to consider a super simplified example where you have two columns that have a correlation of 1. Then you can 'collect' that information in one principal component.

Don't know if you are looking for a mathematical description of this, but if you are just interested in the machine learning and practical applications, then you could also try: https://stats.stackexchange.com/

Not the answer you're looking for? Browse other questions tagged linear-algebra statistics dimensional-analysis principal-component-analysis or ask your own question.