A geometric reason why the square of the focal length of a hyperbola is equal to the sum of the squares of the axes?

When I teach conics, I give a simple geometric argument for the Pythagorean relation for ellipses. (By "Pythagorean relation" I mean the fact that the square of the focal length $c$ is the difference of the squares of the semimajor and semiminor axes, i.e. $c^2=|a^2-b^2|$ for the ellipse defined by $\frac{x^2}{a^2}+\frac{y^2}{b^2}=1$.) The picture argument goes as follows: just draw the obvious isosceles triangle from the two foci to one of the two points at the end of the minor axis. We see two right triangles; in each, one leg is the focal length $c$ and the other leg is the semiminor axis, while the hypotenuse is the semimajor axis. The result follows from the Pythagorean theorem applied to this right triangle.

But when it comes to the Pythagorean relation for hyperbolas, I can't think of an equally convincing picture to draw. Instead I have to give a rather inelegant algebraic argument for the relation $c^2=a^2+b^2$ (for the hyperbola defined by $\frac{x^2}{a^2}-\frac{y^2}{b^2}=1$, with focal length $c$), directly from the definition of the hyperbola. The messy details are below.*

Is there an equally persuasive picture I could draw to convince high school students of the Pythagorean relation for hyperbolas -- without having to get technical with points at infinity, say?

The natural triangle to draw is the right triangle with legs from the center to a vertex and from that vertex to an asymptote, which has legs of length $a$ and $b$; but then the problem becomes why the length along the asymptote should be equal to $c$. I doubt there is a purely (Euclidean) geometrical reason because this triangle lies on the asymptote, not on the hyperbola itself; I suspect some sort of limiting procedure will be required.

Assume for simplicity the expression between the absolute value bars is positive. (The algebra is even more tedious if we don't make such a simplifying assumption.) Then moving the right root to the other side and squaring gives

and upon squaring again we have 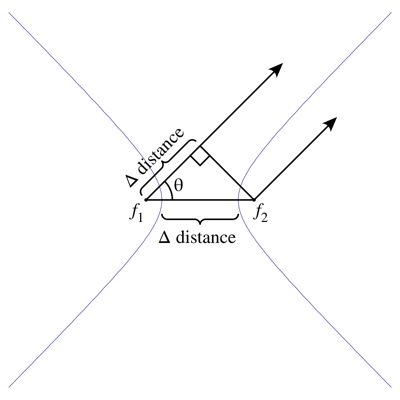 Here's a solution using for the special case of a hyperbola formed as a "vertical" section of a cone ... that is, for the case in which the cutting plane is parallel to the cone axis.

Take a "sideways" look at one of the hyperbola's Dandelin Spheres; let $C$ be its center, and let it meet the cone tangentially at $T$. Our view of the configuration is parallel to the cutting plane (and perpendicular to the cone axis), which here appears as the vertical line $FM$. Were we to look perpendicular to the plane, point $M$ would be the center of the hyperbola, point $F$ would be a focus (so that $|MF| = |OC| = c$ in traditional notation), and point $V$ would be a vertex (so that $|MV| = a$); importantly ---and this is something of a leap of faith--- the crossed lines would be the asymptotes (with "slope" $\pm b/a$, where Dandelin radius $b = |CF|$ gives the rise for a run of $a$). 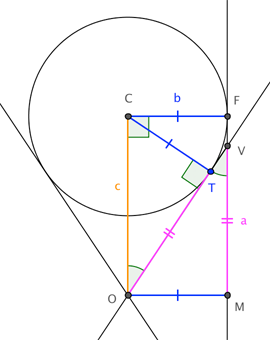 For now, I'll leave it as an exercise for the reader to tweak the argument to cover hyperbolas created by oblique cutting planes (as well as to cover ellipses), where the situation is much more complicated. The reader should also justify the "leap of faith" (which, of course, has to be so, because we know how the story ends).

While it's possible to find $a$, $b$, $c$ represented by segments in a "sideways" diagram analogous to the one above, the connection between $a$, $b$, and the hyperbola's asymptotes is far less obvious. After all, the asymptotes arise from intersecting the cone, at its apex, with a plane parallel to the cutting plane; those lines don't have the same "slope" as the cone's generators, so the geometry of the sideways diagram isn't sufficient for capturing their nature.

You can solve this the same way as the ellipse, by taking the point with greatest y-value. However, that point lies at infinity, so instead of drawing an exact triangle, you take a limit of triangles with points on the curve (as you suggested) and scale them down so they don't go off to infinity themselves. This can be made precise in projective geometry, because then that point at infinity is a real point (there are 2, I believe). In fact, the hyperbola is just an ellipse turned inside out, so that it's greatest and least y-values lie at infinity (just like a line is a circle with a point at infinity).

1
Proof that in hyperbola sum of squares of a and b is equal to c.
1
Derivation of equation of hyperbola - Where does the b²=c²-a² come from?
0
How can I prove that $a^2 + b^2 = c^2$ in a hyperbola?
10
What is the reason behind the Pythagorean relation in a hyperbola?
0
A way to directly see $a^2+b^2=f^2$ for hyperbolae?
1
Dandelin spheres and the asymptotes of a hyperbola
1
Is the conjugate axis in hyperbola just a number?

0
Finding the Width and Height of Ellipse given an a point and angle
10
What is the reason behind the Pythagorean relation in a hyperbola?
1
A parabola is an ellipse with one focus at infinity
1
Behaviour of foci from ellipse to parabola
2
Is there geometric proof for the equation of hyperbola using only constant distance from two foci definition?
0
Synthetic geometry of conic sections