Which of the two quantities is greater?

What is the best and quickest way to get the answer without using calculation, I mean using bird's eye view?

If we have two pairs of numbers, and both pairs add up to the same total, then the pair with the larger product will be the pair that's closer together. So the answer is the first pair.

(This picture might help: if you want a rectangle with a fixed perimeter to have the biggest possible area, you want it to be a square.)

No calculation or equation needed at all.

When you have a fixed length to distribute over the 4 borders of a rectangle, and you want to get the maximum possible surface, you will get a square (equal length borders).

In other words, when adding a value to two multiplicants, you will get the biggest result when minimizing the difference of the multiplicants: The bigger one is the equation wher you add 0,43 to the smaller number and 0,043 to the bigger one.

The idea of cross term can help you, if you can do it mentally:

The main term in the product is $ab$. The next in importance are the cross-terms $ay$ and $bx$.

Finally, the terms $xy$ are negligible. Actually, in our case they are not only negligible, they are the same in product A and product B.

We get a bigger product if the cross term is bigger. In quantity A, the number $0.430$ gets multiplied by the big guy, namely $35$. Thus A is bigger than B.

Thus having the bigger "extra" amount opposite to the bigger number results in a larger increase.

Of course, these approximations ignore that fact that the gains have increased in both "amplifiers", but we are working with the original gains. But the gains have increased by only an insignificant amount. In fact the only difference between our approximation and the true increase is the missing small factor $430 \times 43$, which is only $18490$. That is less than the output increase from just adding a $1$ to either $25000$ or $35000$, therefore negligible when we are dealing with adding $43$ or $430$.

To see why, it helps to look at this picture: 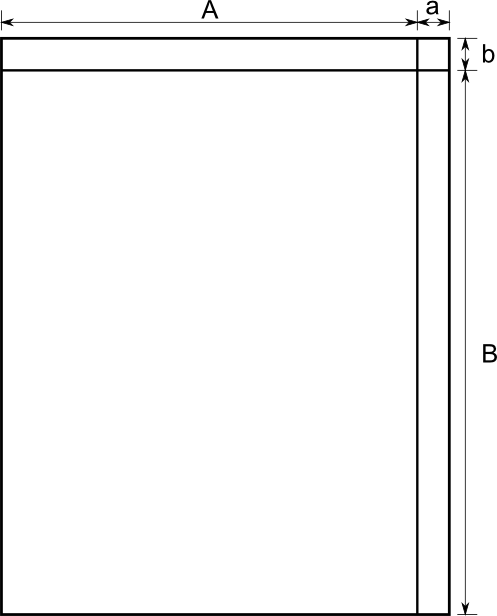 When we increase the inner rectangular area $A\times B$ to the outer one $(A+a)\times(B+a)$, most of the increase comes from the long, thin horizontal and vertical strips $A\times b$ and $B\times a$. (Let us call those the flanks). Only a small contribution comes from the small square in the upper left $a\times b$. (Let us call that the tip). Of course this is only true when $a$ and $b$ are small compared to $A$ and $B$, but neglecting $a\times b$ simplifies our reasoning in situations when this is the case.

Furthermore, if we are reasoning about a dilemma about involving swapping the $a$ and $b$, to obtain the larger product, we can always ignore the tip and look at just the flanks, even if $a$ and $b$ are large relative to $A$ and $B$. because the tip does not change between the two choices: it is $a\times b$ both ways. We want the longer flank to be the thicker of the two and the thickness of the longer flank is determined by what we add to the shorter side.

so A is bigger

from the first equation we get:

from the second second equation we get:

I would separate the numbers into 2 terms so that there is a common factor between A and B:

Comparing the last equality of A and B, it is clear that A is greater.

Closer numbers will yield the higher product when they got the same sum.

Since the terms added results in 2*a, independent of x, closer together (smaller x) will always be larger.

Imagine an extreme case of shopping where you have 3 Louis Vuitton bags costing £1,000,000 each. Which is cheaper, getting a discount of £1 per item or putting one bag back? This tells you that 3 x 999,999 is larger than 2 x 1,000,000. And that tells you whether increasing the little term or the big term has a greater effect.

When comparing column A to B, 35K is being multiplied by small in both situations However, in column A, it's being multipled ~400 times vs ~40 times in B. That's an entire order of magnitude larger (a.k.a extra digit).

Thus, you can intuit that A is bigger.

Note: Once they are both in the same order of magnitude, e.g. if B was >100, you'll probably want to use calculator.