I am having some trouble proving Corollary 6.3.2 in Borovkov's Probability Theory (for reference, this material is on pages 147 to 149 in the book). For convenience, I provide some definitions and related theorems. Skip to the end for a TLDR.

Definition: We say that a sequence of generalized distribution functions $\{G_n\}\subseteq\mathcal{G}$ converges weakly to some $G\in \mathcal{G}$ if, for all points of continuity $x\in\mathbb{R}$ of $G$, we have $G_n(x)\to G(x)$.

Note that the above definition is not as "nice" as weak convergence in distribution functions. Recall that, for $\{F_n\}\subseteq \mathcal{F}$ and $F\in\mathcal{F}$ such that $F_n(x)\to F(x)$ for each point of continuity of $F$, an equivalent condition is to say that, for all bounded continuous functions $f$, we have $$\int f\ \mathrm{d}F_n \to \int f\ \mathrm{d}F.$$ However, this equivalence is not true for the case where $G_n,G\in\mathcal{G}$. Some extra definitions:

The book then presents a variation of Helly's selection theorem and a corollary:

The following theorem is true:

I will provide a proof of the converse that basically outlines Borovkov's proof:

It remains to show that the entire sequence $\mathbb{F}_n$ converges weakly to the $\mathbb{F}$ (given by the distribution function $F$) above. By Corollary to Helly's selection theorem, it suffices to show, for arbitrary $\{F_{n_j}\}_{j=1}^\infty$ subsequence that converges weakly to some $G\in \mathcal{G}$, we have $F=G$. First, notice that the above argument ensures the limit function is actually a distribution function, so we actually have $G\in\mathcal{F}$.

However, I am having trouble proving the following corollary (I copied and paste straight from the text): 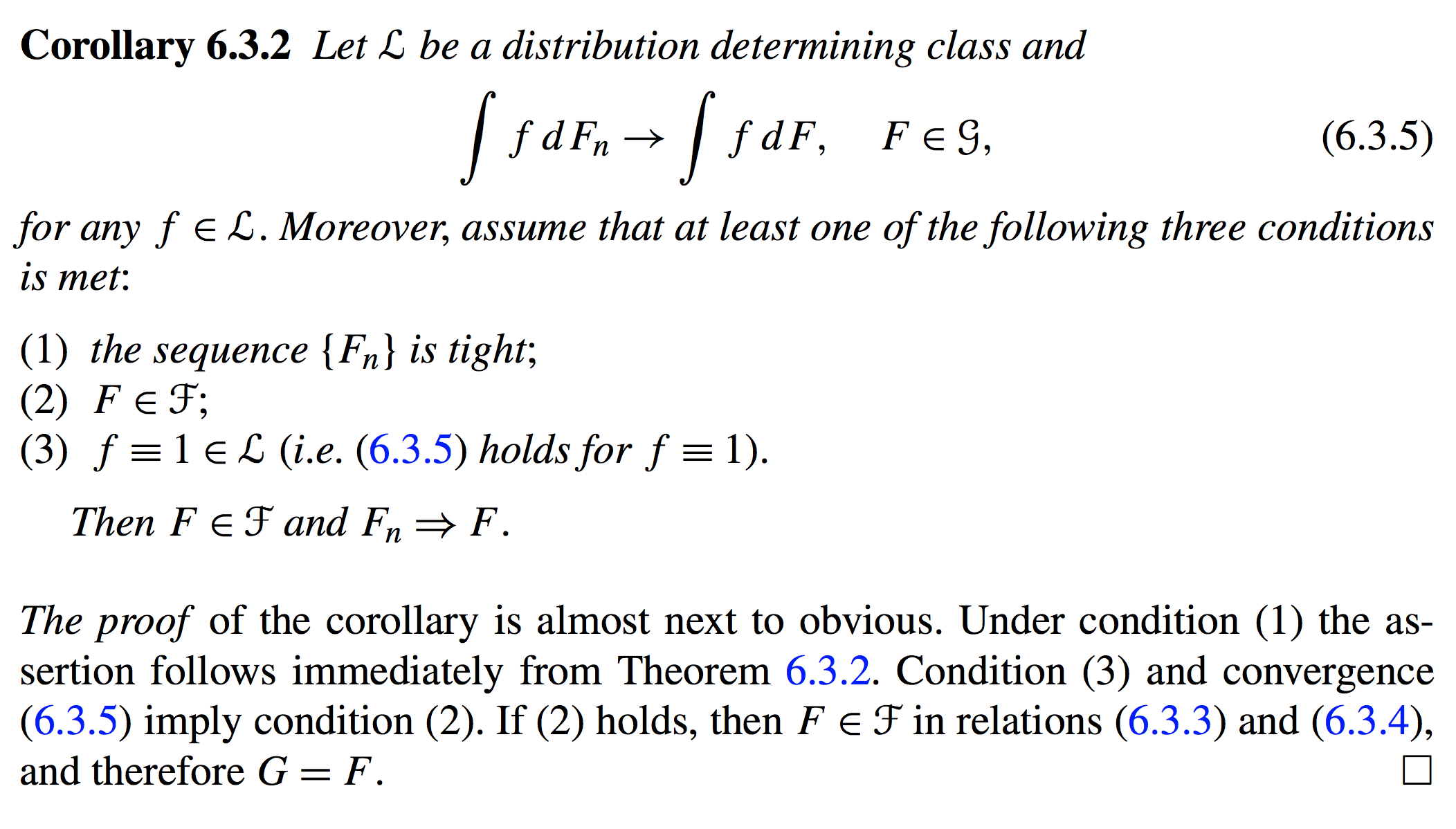 I am having trouble showing that (2) is sufficient. The argument they gave appears to be down the lines of the following (just basing off the proof of the previous theorem)

Consider the sequence $F_n$, by Helly's selection theorem, we have $F_{n_k}$ converges weakly to some $G\in \mathcal{G}$. Further, we have, for each of those subsequences that converge weakly, $$\lim_{k\to\infty}\int f\ \mathrm{d}F_{n_k} = \int f\ \mathrm{d}F.$$ Now, it would be nice if we also write (I think the author just assumes this, but this does not appear to be true for me) $$\lim_{k\to\infty}\int f\ \mathrm{d}F_{n_k} = \int f\ \mathrm{d}G$$ If that's true, then we're done because that would imply $G=F$ and every subsequence that converges in $F_n$ converges to the same distribution function. But we cannot do that, because $G\in \mathcal{G}$ and we know that weak convergence (as defined by pointwise convergence to all points of continuity in the limit function) is no longer equivalent to convergence in integrals.

TLDR: I have having trouble proving (2) is sufficient in the above corollary and the hint the author gave is confusing.

Basically I was able to prove my case of interest, which is just Lévy's continuity theorem. It's easy to see that Lévy's theorem falls easily out of this corollary because $\{e^{itx}\}_{t\in\mathbb{R}}$ is a distribution determining class. However, this is a "special" distribution determining class because, as it turns out, if $\varphi_n(t)\to\varphi(t)$, where $\varphi_n$ and $\varphi$ are characteristic functions of $\mathbb{F}_n$ and $\mathbb{F}$, respectively, one could prove that this condition implies $\mathbb{F}_n$ will be a tight sequence of measures. The proof of tightness relies on the fact that $\varphi(t)$ will be a continuous function, in particular it will be continuous at $0$. Of course, this is a very special case of the Corollary and I'm not sure how much generalization does this hold.

On the other hand, the family $\mu_n$ converges to the zero measure vaguely and in particular is not tight.

Edit: The initial argument I suggested was incorrect. I am not deleting the answer because it has accumulated some relevant comments. See the answer by Chris Janjigian that gives a counterexample to Cor 6.3.2 parts (2) and (3).

Not the answer you're looking for? Browse other questions tagged real-analysis probability-theory measure-theory weak-convergence cumulative-distribution-functions or ask your own question.