An ellipse inside a heptagon

Can you provide a proof for the following claim:

Claim. Construct a convex heptagon circumscribed about an ellipse. Intersection points of its non-adjacent longer diagonals lie on a common ellipse. 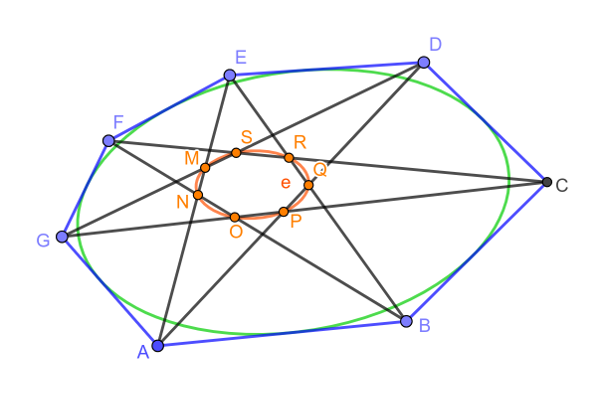 GeoGebra applet that demonstrates this claim can be found here.

I have noticed that principal diagonals of the hexagon defined by the points: $𝐺,FG \cap ED,𝐷,𝐶,𝐵,𝐴$ concur at the point $P$. Similar is true for the points $Q,R,S,M,N,O$ as well . So I guess we should apply Brianchon's theorem somehow.

The comments mention the Heptagon Theorem:

Let $H$ be a heptagon with seven vertices given in cyclic order inscribed in a conic. Then the Pascal lines of the seven hexagons obtained by omitting each vertex of $H$ in turn and keeping the remaining vertices in the same cyclic order are the sides of a heptagon $I$ which circumscribes a conic.

Moreover, the Brianchon points of the seven hexagons obtained by omitting the sides of $I$ one at a time and keeping the remaining sides in the natural cyclic order are the vertices of the original heptagon.

Since this is a theorem about points, lines, conics, and incidence, it is a theorem of projective geometry and can be dualized. The dual of the first paragraph is

Let $H$ be a heptagon with seven sides given in cyclic order which circumscribes a conic. Then the Brianchon points of the seven hexagons obtained by omitting each side of $H$ in turn and keeping the remaining sides in the same cyclic order are the vertices of a heptagon $I$ inscribed in a conic.

As noted in the OP, the Brianchon points of the seven hexagons are the pairwise intersections of consecutive long diagonals (by which we mean their endpoints are in cyclic order, such as $AD,BE$). So the dualized first paragraph proves the OP's claim.

Below is a copy of the proof of the Hexagon Theorem. 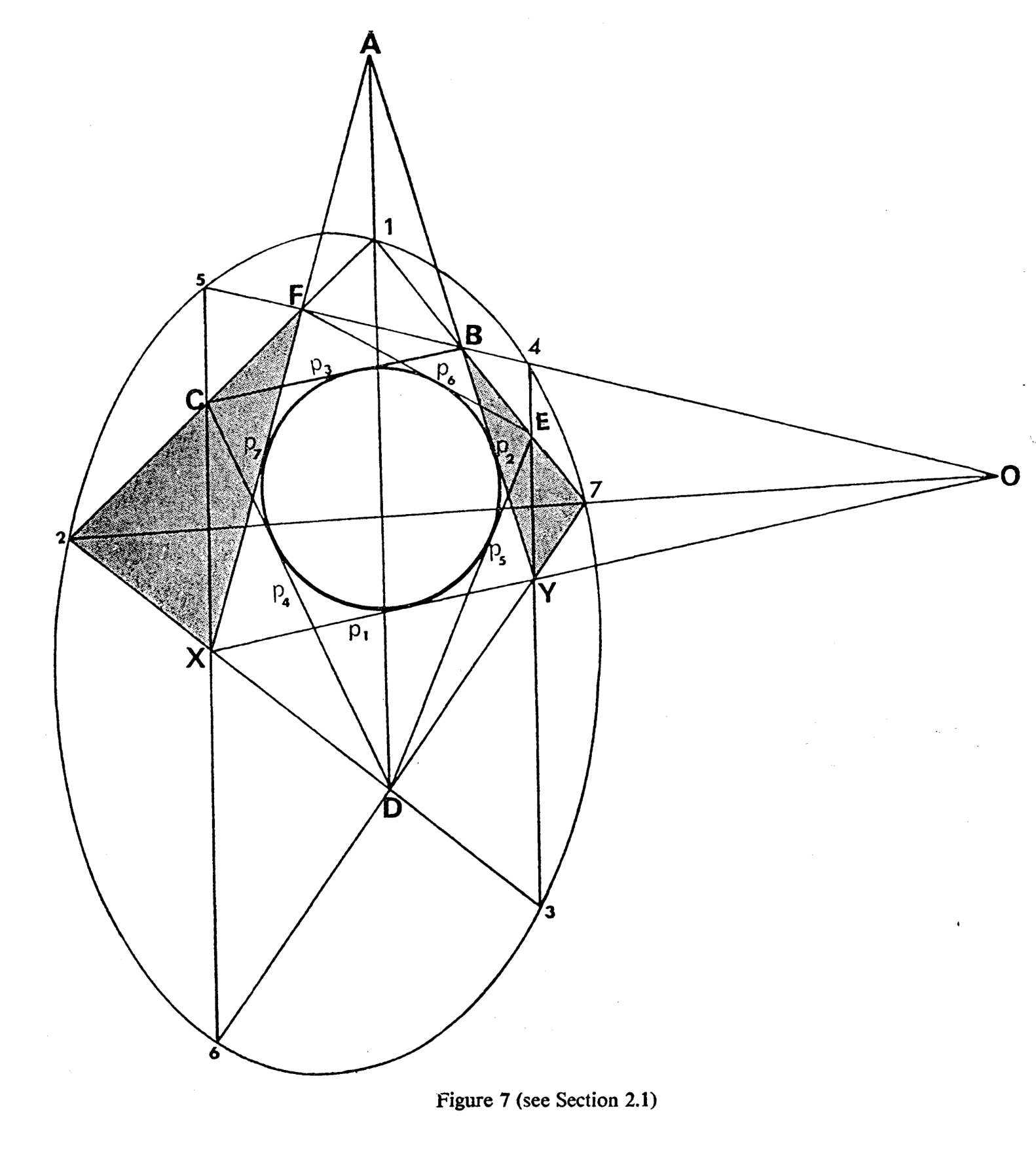 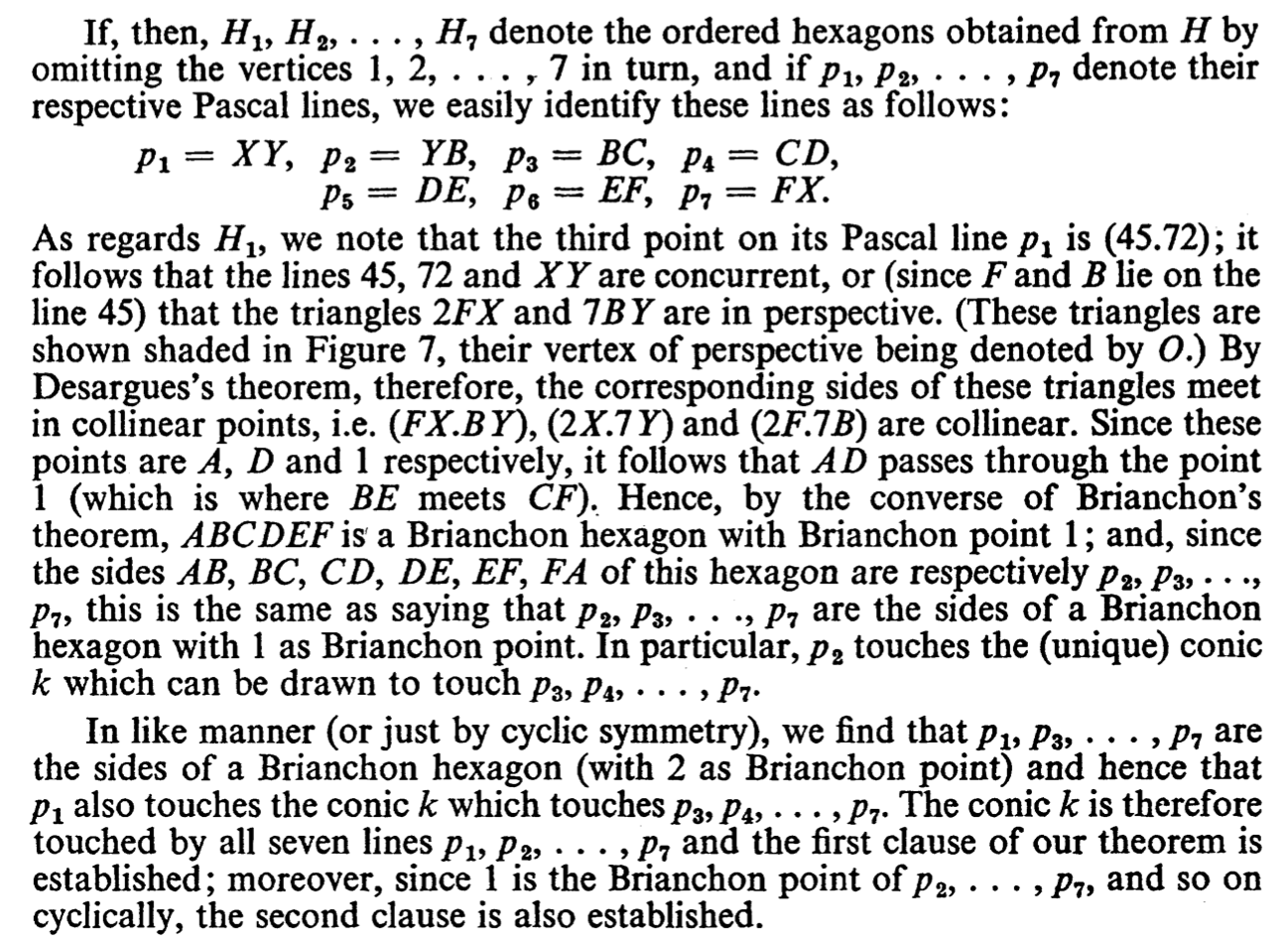 Not the answer you're looking for? Browse other questions tagged geometry conic-sections projective-geometry polygons or ask your own question.

3
A conic inside a hexagon
1
Given the regular heptagon, how to prove the four point in circle??
1
Generalizations to Brianchon's theorem?

5
A generalization of Bottema's theorem
5
Six points on an ellipse: generalizing Conway's Circle Theorem
2
Formula for the area of a regular convex pentagon
3
A conic inside a hexagon
2
Line segments intersecting at the nine-point center
2
An ellipse determined by circumcenters
2
Collinearity in bicentric pentagon
5
Ratio of area of triangle and hexagon
2
Brianchon's theorem apply on degenerate conic