Connection between universal properties and the existence of a left adjoint

I've noticed that in many cases, whenever a functor $G:\mathscr B\to\mathscr A$ has a left adjoint, there's some kind of universal property around (I don't know how to state this more precisely other than using the word "around"). Examples (without explanation):

So I was wondering whether there's some general connection between universal properties and the existence of left adjoints. This question probably is too imprecise, but here's what I got when trying to generalize the above examples:

In this case, my conjecture is that there is the following universal property: 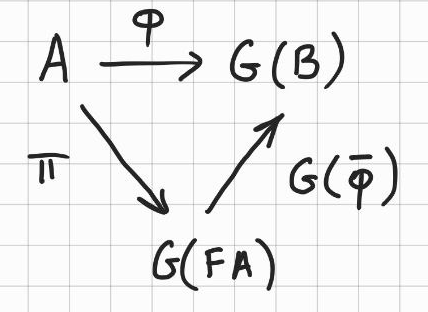 When $G$ is one of the functors from the above example, it's always clear what $\pi$ is, but in the general case I don't really see what the arrow $\pi$ would be. Is there a way to define it in general so that the diagram commutes? If my conjecture is true, I would call the quoted part "the general (case of) universal property" (not sure if this is standard or not). And it would follow that whenever a functor has a left adjoint, there is an associated universal property.

Apparently, the converse of my conjecture is true (if there's a way to define $\pi$ that I'm confused about) because if there's such universal property, one could define the isomorphism from the definition of adjunction by $\phi\mapsto \overline\phi$ and in the other direction by $\psi\mapsto G(\psi)\circ \pi$. (Let me know if this is not true.)

Is there more stuff that can be said about the connection of left adjoints and universal properties?

If you look at the Wikipedia article article on adjoint functors, one of the three equivalent definitions of an adjoint pair uses universal properties. To answer one of your specific questions: your map $\pi : A \to GF(A)$ is the unit of the adjunction evaluated at $A$ and is given explicitly by applying the hom-set adjunction to the identity map $1_{F(A)} : F(A) \to F(A)$.

Not the answer you're looking for? Browse other questions tagged abstract-algebra category-theory adjoint-functors functors universal-property or ask your own question.