How to get the area of the triangle embedded in the unit circle when it makes an inner reflection?

The figure represents the unit circle which has a radius of one unit. Find the value of the angle $\alpha$ such that the largest edge of the cherry shaded region is equal to $\sqrt{2+\sqrt{3}}$. 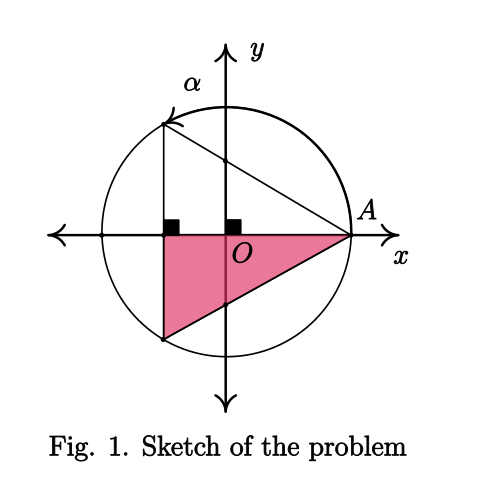 The choices given in my book are as follows:

I'm not sure exactly how to solve this problem, but I belive that the given angle alpha is referred that begins on $A$ and ends in the other end from the vertex of the triangle which appears to be isosceles.

I think the approach here is that to get the value of alpha I must make a trigonometric equation and use the larger edge in terms of alpha and equate this with what I was given and this may give the desired result.

The distance from the $\textrm{x-axis}$ to any of the vertex of the base of the triangle with those parallel to $\textrm{y-axis}$ is the same, hence this is an isosceles triangle and this may help or ease the solution a bit.

Since those internal angles in the circle which make up the triangle are $\frac{\alpha}{2}$ because it is an iscribed angle, then I'm getting:

I'm naming the end point of the angle alpha as $P$:

Thus $\angle OAP=90-\alpha/2$ and the intersection of lines where is the second little square looking from the left would be point $R$.

From which I believe the equation to be solved would be as follows:

Using the necessary algebra I'm getting this into:

But from looking at these expressions none of these seem to help me much into the solution.

Was my strategy wrong or what?. Can someone help me here?. I honestly don't think I'm far off from the answer, so I need a helping hand which can guide me to the right path.

Not the answer you're looking for? Browse other questions tagged algebra-precalculus trigonometry or ask your own question.