Questions on the dual of the composition $R;S$ of binary relations.

I recently started reading about relation algebras. This is a very new and unfamiliar, but interesting field to me. I'm not taking a course in it, it's self learning on my spare time, so please bear with me. My level is undergraduate-master with no real knowledge of relation algebras or formal order theory, but with some minor knowledge of category theory.

This corresponds nicely to multiplication of logical matrices with elements in the two element boolean algebra. 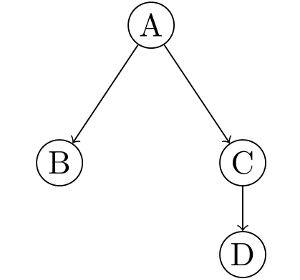 This can be represented by the logical matrix

One can however define a dual notion of composition by exchanging and/or and exist/for all, let's call it $R\oplus S$ for now, as

As I understand it, this is the dual of $R;S$ in the same sense as $\vee$ and $\cup$ are duals of $\wedge$ and $\cap$ in order theory/logic and set theory, since we have that

if we let $\cdot$ denote the usual multiplication of logical matrices.

The "relational sum" is often called "relative sum" and denoted $R \dagger S$ in (for example) Maddux Relation Algebras (2006). Maddux explains a lot about the history of the operation, which is also called "relative addition", and quotes Pierce in a useful extract. As Maddux says (p8) "It is fairly easy to express relative products in everyday language ... but relative sums present a greater challenge" and the examples provided do not make the operation sound conceptually obvious when modelling examples like uncles and aunts etc.

Not the answer you're looking for? Browse other questions tagged relations boolean-algebra relation-algebra or ask your own question.

0
The productrelation matrix is equivalent to the product of the matrix of the relations
2
Does(n't) associativity of functional composition follow straightaway from associativity of relational composition?
2
The category with binary relations as objects
2
Solving this logical puzzle by resolution doesn't work for me
2
Does this category have a name? (Relations as objects and relation between relations as morphisms)
0
How to solve a system of nonlinear equations in GF(2)
2
Calculate CNF and DNF without truth tables
1
Which of the following sets of boolean functions is functionally complete?
1
An extra condition for composition of relations which are not necessarily functions