How to get the weight of the orange sphere?

The figure from below represents two scales, one is not in equilibrium while the other is at equilibrium. Assume both identical objects have the same weight and those with different shapes have different weights and each object weights an integer amount of pounds. With all this information, what would it be the least amount of the orange sphere?. 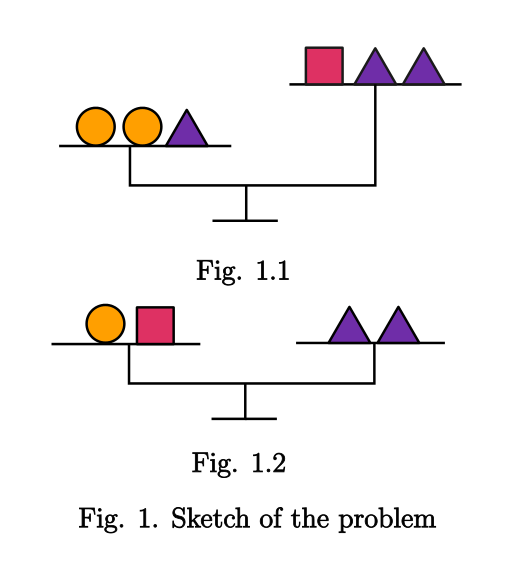 The choices given are:

From looking at the figure what I've attempted to do was as follows:

Hence it can be inferred that:

Thus the triangle weighs more than the square.

But from only these it is not possible to know an exact weight for each of these figures. How can I assume which weight goes to which?

We don't know which is more heavier than the other so I'm setting that the sphere might be heavier.

In order to reassure the least possible weight for that sphere, I shall assume that it is ligther in weight than the square.

Thus I rearrange my initial analysis and get to:

The square is $3$ pounds, the circle is $1$ pound, but triangle would be $2$ pounds, this is a contradiction as the triangle weight is more than the square.

Therefore the minimum weight that it can have the sphere is three pounds or choice 1.

Is there any way to confirm this?. Is my logic correct?.

Here is a concrete way to think. $T$ can be identified as arithmetic mean of $C,S$. As they are distinct, we have two possibilities : $C<T<S$ or $C>T>S$.

Now, since you are interested in the weight of $c$, it might be better to search for a relation containing $c$ instead of removing it by using the equation

47
How much weight is on each person in a human pyramid?
1
Is there a quick method to solve a problem involving guessing the correct weighs?
1
Does a problem involving finding the least amount of trials in weighing to reach a certain quantity can be solved without derivatives?
0
Finding the ratio of the area of a sphere to the total area of an inscribed cylinder/cone
0
How to find the speed of a block after the collision with a swinging sphere?
1
How to find the perimeter of a rectangle and an scalene triangle?
1
What is the minimum weighting trials to be made with a two pan scale to find the lighter marble?
0
How to get the area of the triangle in a trigonometric circumpherence when there's a negative angle?
0
How to get the area of the triangle embedded in the unit circle when it makes an inner reflection?
1
Are two medians required to get the area of the triangle?