My problem is as follows. I have two flat isosceles triangles (marked in yellow below) -- with sides of $L$ and base of width $w$ -- touching at a common point (marked in red), such that the angle between them is $\theta_i$. Note that $\theta_i$ is also the apex angle of another isosceles triangle, which I have depicted in lavender.

Now, I tilt these triangles (shown in deep blue) towards each other, by an angle $\alpha$. Then what is the equation relating the final angle $\theta_f$ to $\theta_i$ and $\alpha$? I know from measurements that $\theta_f \leq \theta_i$.

I realise that I only need to figure out how the lateral sides of the yellow triangles behave under the tilt $\alpha$, but I am unable to do so. Can someone please help? 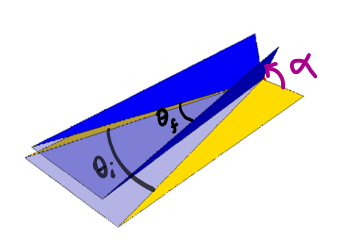 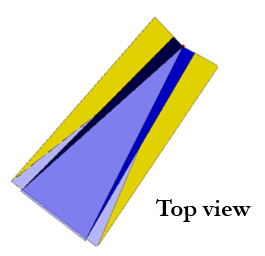 Note: In the picture, the entire deep blue configuration is tilted off the horizontal plane, but this is just for viewing convenience.

Pick coordinates centred at the red point with the $z$-axis being the internal angle bisector of $\theta_i$, $x$-axis being the orthogonal on the plane and $y$-axis the vertical out-of-plane direction. So the two initial apex are $(\pm L\sin\frac12\theta_i,0,L\cos\frac12\theta_i)$. If the bases of the two triangles are on the same line, then we have $\sin\frac12\theta_i=w/(2L)$. It isn't clear whether this is the case from your description.

If you rotate about other axes parallel to this, you will get parallel line, so the angle is unchanged (except you get skewed lines instead of intersecting lines in general).

0
roughly estimate the angle between two lines that are really close to each other
3
Area of overlapping squares
1
The radius of the inscribed sphere.
2
Martini Glass - Extension
8
Inscribing rhombus in a triangle's angle in only eight compass-and-straightedge steps
1
Compute the dihedral angle of a regular pyramid
0
The angle between two tilted circles
2
Evolution of the projected angle with dihedral angle