What does this double integral even represent?

If you plot these two functions, the area enclosed by them and the x-axis is obviously 12 (just the area of two right-angled triangles, and I even checked it with integrals to make sure I wasn't going mad). I believe the double integral represents some sort of volume, but I don't understand what volume, because nowhere in this question a z-axis is mentioned.

I feel like I'm either missing something very fundamental, or this is just a really badly worded/confusing question. Either way, any help would be very much appreciated! :) 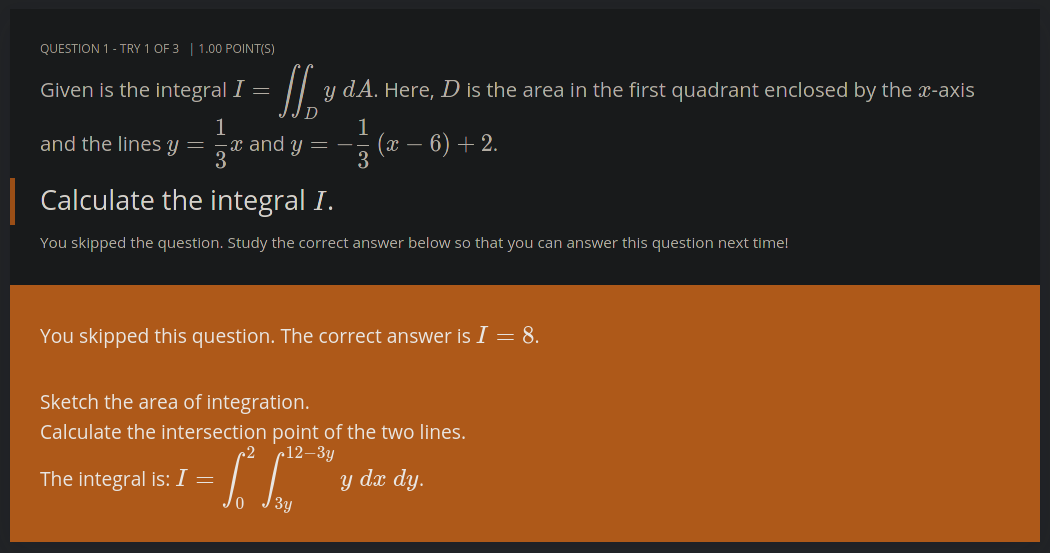 Before we consider a double integral lets think about what a single integral represents. The usual interpretation of a single integral is the area under a curve. So $$ \int_a^b f(x) \,\mathrm{d}x $$ represents the area between the $x$ axis (which is just $y=0$), the lines $x=a$, $x=b$ and $y=f(x)$. This often a valid and useful interpretation but it isn't the only interpretation. Another interpretation may arise with a more specific function. Say we have some string with length $L$ and we know that its mass per unit length at some point $x$ along the string is given by $\rho(x)$. Then the total mass of the string can be expressed as [1] $$m = \int_0^L \rho(x)\,\mathrm{d}x $$ To see why this is the case we think about what an integral is, really its just a sum of lots of infinitesimal bits (excuse the hand waving, I'm a physicist). So a discrete version of the integral above may be $$ m \approx \sum_i \rho(x_i) \Delta x $$ where we approximate the integral as a sum and we split the string into finite lengths $\Delta x$ and we consider the density at the point $x_i$ within each length to be a good approximation of the density of the whole length.

Personally I think that this interpretation of the integral is better suited for generalisation to higher dimensions. We can similarly consider a function like $\sigma(x, y)$ which represents the density at a point $(x, y)$ on a plane. Then the integral $$ \iint_S \sigma(x, y)\,\mathrm{d}x\mathrm{d}y $$ is just the mass of the surface, $S$, over which we are integrating.

Notice how similar this is to the one-dimensional case with all dimensions shifted up by one. Single integrals become double integrals, intervals such as $[a, b]$ become regions of the plane, $S$, and areas, given by single integrals, become volumes, given by double integrals. The problem comes when we want to evaluate a triple integral and then with the "area under a curve" interpretation we have to consider the 4-dimensional hyper-volume under a volume and I don't know about you but that is not something I can picture.

So to answer your specific question, what does the given integral represent, the answer is: it depends. This is sort of a rubbish answer but it is true. If the function we are integrating, in this case simply $y$ is naturally thought of as a height then a volume is a valid interpretation (and probably the best interpretation in this case). If it can be thought of as a density then mass is probably a better interpretation. However both of these are just ways of thinking about the integral and really they are the same, we can view mass as simply a coordinate in some "mass-space" in a similar way to how we might consider momentum space or any other more abstract space.

Not the answer you're looking for? Browse other questions tagged calculus integration or ask your own question.

0
Green's Theorem - Trouble understanding problem
4
Does this integral expression makes sense?
1
What does this FTC scenario actually represent?
1
Does removing a 1-dimensional curve from a 2-dimensional region affect a double integral?
0
How to determine Integraton limits?
0
Understanding the Graph of a Double Integral