I just finished working through Papa Rudin's proof of Lebesgue's Monotone Convergence Theorem, and I have some questions: 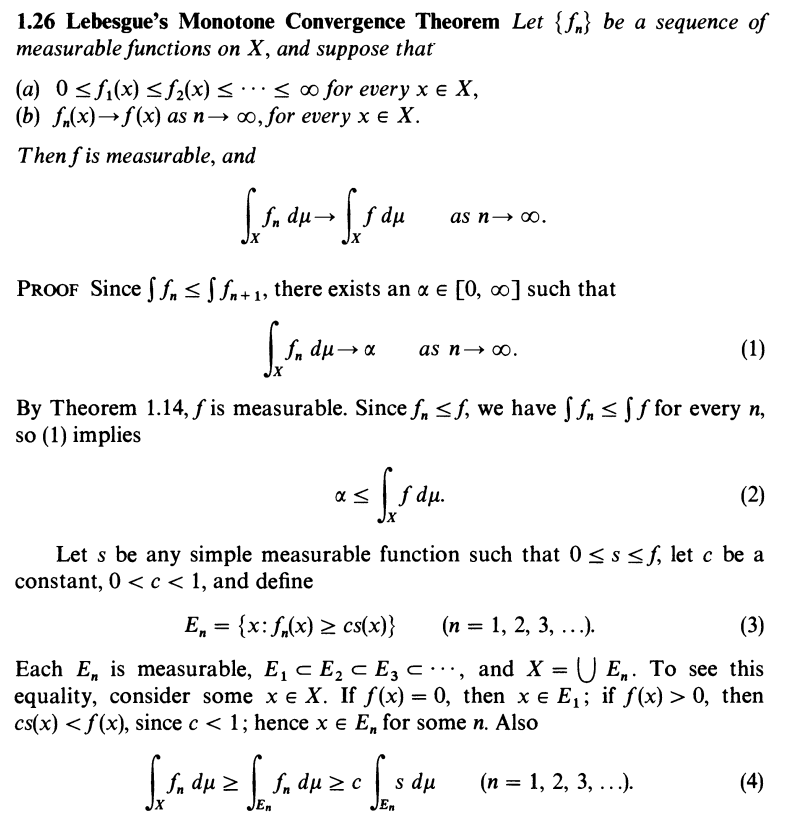 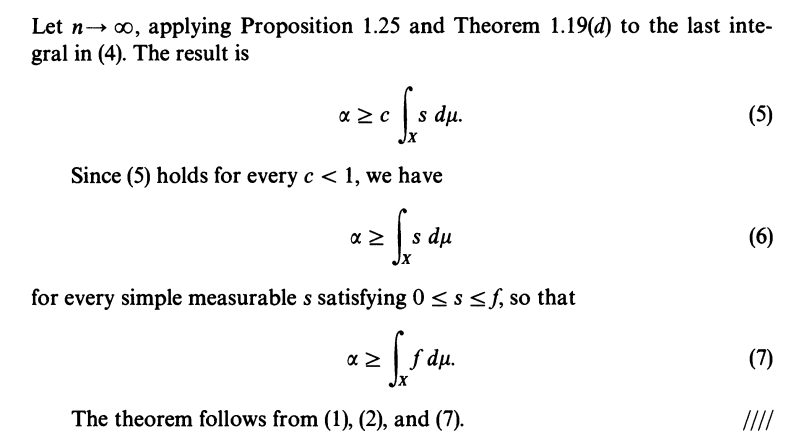 Thanks a lot for your time and help!

For any measurable functions $f,g:X\to[0,\infty]$, it is a standard exercise (which you should definitely attempt by yourself; otherwise there are certainly questions about this on this site too) that $[f\leq g]:=\{x\in X\,|\,f(x)\leq g(x)\}$ is measurable (from this it follows that $[f\geq g], [f<g], [f>g], [f=g]$ are all measurable). Do you see how this applies to your case?

Yes, you can take limits in $(5)$. For every $c<1$, we have $\alpha\geq c\int_X s\,d\mu$. So, take the limit as $c\to 1^-$ on both sides. You should have definitely seen in a basic analysis course that inequalities are preserved under limits.

The inequality $\lim\limits_{n\to \infty}\int_Xf_n\,d\mu =\alpha \leq \int_Xf\,d\mu$ is a very trivial consequence of monotonicity of the integral. The other direction is not so trivial, because the definition of $\int_Xf\,d\mu$ involves a huge supremum over all simple functions. Also, up to this point in the treatment, the "only" thing we really know about integrals are basic facts (theorem 1.24), and the only integrals we can explicitly calculate are those of simple functions. The idea is therefore to somehow reduce the more complicated problem of proving the reverse inequality to something more familiar.

This final idea of "giving yourself some room for error" is a VERY VERY VERY common idea in analysis. If you've studied baby Rudin (or Spivak or any other introductory book), you must have surely seen such ideas. The simplest example of this I can think of is that given $z\in \Bbb{C}$, we have $z=0$ if and only if for every $\epsilon>0$, we have $|z|\leq \epsilon$. These are equivalent statements, but sometimes, the second statement is easier to prove, because you have an $\epsilon$ amount of wiggle room to establish the inequality $|z|\leq \epsilon$.

Not the answer you're looking for? Browse other questions tagged real-analysis analysis measure-theory proof-explanation or ask your own question.