What is the equation for a 3D line?

Here $t$ is a parameter describing a particular point on the line $L$.

These are basically the equations that result from the three components of vector form.

Here we assume $a,b,$ and $c$ are all nonzero. All we've done is solve the parametric equations for $t$ and set them all equal.

I used this relationship to generate this picture: 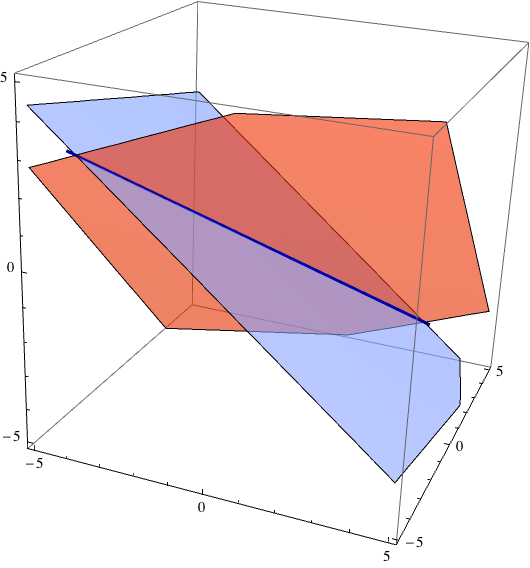 This is largely a topic that you will learn about in a third semester calculus course, at least in the states.

When I originally asked this question, I was not expecting these seemingly indirect ways of describing a line, such as an intersection of two planes, or vector equations. Just like how $y=mx+b$ is the equation of a line in $2$D, I was expecting some sort of equation $z = f(x, y)$, where $f$ is some nice elementary function. I am writing this answer for anyone who has this same idea that I did. I want to quickly explain why the equation of a line cannot be $z = f(x, y)$, where $f$ is a nice function.

Another way to say it is this: imagine the graph of the line. If we want an equation $f(x, y)$ for the line, the domain of $f$ can only be the shadow of the line on the $xy$ plane. But any nice function $f$ will have as a domain either all pairs $(x, y)$, or almost all of them.

Ovi, I too like your answer about having initially set out looking for something of the form $z=f(x,y)$. I think maybe I have something that tends in a similar direction, and that hopefully feels like a more generalizable extension from $\mathbb{R}^2$ to $\mathbb{R}^3$ (and beyond?).

The above wasn't obvious to me at all though, so for those who care to walk through it as I did, my thinking is as follows:

That might seem tautologically obvious, but let's consider that if $x$ and $y$ weren't in this constrained relationship to one another where $y$ is determined by $f(x)$ -- in other words, if they were free to vary independently of one another, and every $x$ value could be combined with any $y$ value in a coordinate $(x,y)$ -- then you wouldn't have an object describing a line, you would have an object that describes the whole $xy$ plane itself!

Moving into $\mathbb{R}^3$, it's true, exactly as you said, that if we construct an object whose $z$ value is determined by a function $f(x,y)$ we'll have two values, $x$ and $y$, that are allowed to vary independently of one another, and will thus end up with a plane. (The only difference between this plane and the plane described in the paragraph above is that in $\mathbb{R}^3$ we have the added $z$-dimension in which the plane can be tilted, whereas in $\mathbb{R}^2$ the only possible plane is the $xy$ plane, but this is just an aside).

And if there is only one $y$ and $z$ value for every $x$ value, you know this is a line. As a counterexample, consider a linear equation in 3 variables. This describes a plane in $3$-space. For every $x$ value, $y$ and $z$ can still vary in a dependent relationship with each other, i.e. at each value of $x$ you have a slice through a plane instead of a point, which is what you'd need for it to be a line.

You can arrive at this by looking at the intersection of two planes, as shown in Mark's answer above. If you set two planes' equations equal to one another, and try to solve for the intersection, you end up with a solution (in linear algebra, a general solution or parametric solution) where two out of the three unknowns are given as functions of the third.

This is a quadratic equation in, say, $z$, in that a closed form solution could be written for $z$ in terms of $x, y$ and other given parameters. However, it is not easy to see that this equation should lead to a real solution for $z$ for only a specific subset of $x, y$ pairs on the $x-y$ plane.

I love your answer for a line equation in the form of z = f(x, y)... Unfortunately calculating square roots can be impractical from the calculational standpoint and hence I really doubt any plotting software will be able to graph it correctly.

I was thinking of a little bit different approach in order to achieve this. Based on a symmetric equation of a line. However it requires some support for if ... else logic.

Of course the advantage here is that it's easy to read and you can potentially define any line in $R^3$ by changing the constant parameters. In practice though, even when conditional statements are supported, for example in GeoGebra - it still fails to actually draw the line.