Why does an exponential function eventually get bigger than a quadratic

I have seen the answer to this question and this one.

My $7$th grade son has this question on his homework:

How do you know an exponential expression will eventually be larger than any quadratic expression?

Note: that is the way the problem is stated, it does not say that the base of the exponential expression has to be greater than $1$. Although for base between $0$ and $1$, it is still true that there exists some $x$ where the exponential is larger than the quadratic, the phrase "eventually" makes it sound like there is some $M$ where it is larger for all $x>M$. So, I don't like the way the question is written.

Note that I just used terminology like approach and really big because a $7$th grader would not know of limits, so don't nitpick that.

Secondary note: I said $a>0$ and $b>1$ because I assumed that both of the functions would be traveling upwards as you moved right along the $x$-axis.

Assuming the exponential is $c^x$:

As a result, we have reduced our argument to: why does an exponential function eventually get bigger than a linear one? Which likely has been answered already by the teacher.

Personally I'd be hesitant to pose such a question to a $7$-th grader. For some this is a big but instructive stretch of the mind, for others the stretch is too big. So my first advice would be

Don't try to force your son to 'get' this.

Reservations aside, here's how I'd approach it: Together you can explore the question

How many steps does it take for such a function to double?

An exponential function grows by $c\%$ at every step. So after some fixed number of steps the output doubles; it isn't difficult to find that it has certainly doubled after $\tfrac{100}{c}$ steps.

Conclusion 1: An exponential function has a 'doubling number'; every time you increase $x$ by this number, the function doubles.

Conclusion 2: A quadratic function takes longer and longer to double as $x$ increases. The number of steps required to double increases without bound.

This question motivates thinking about exponents and hence logarithms. But even without going into the definition of logarithms, we may consider relevant expressions of $x$-values for which the difference in rate of growth may become apparent. Consider: $$ f(x)=a^x\\ g(x)=x^2 $$ and derive that $$ f(2x)=a^{2x}=\left(a^x\right)^2=g(a^x) $$ So now we can instead ask:

So the problem now is reduced comparing the two inputs $a^x$ and $2x$ to the same function $g$ and showing that $a^x$ eventually becomes larger than $2x$ by any given factor one may wish to consider, however large.

As a corollary, this approach works for any degree polynomial, namely take $g(x)=x^n$ and consider $f(nx)=g(a^x)$ compared to $g(nx)$. Thus one compares an exponential input $a^x$ to a linear input $nx$.

Not sure they saw $\log$ yet, but to "visualize" and get the numbers out of the exponentiation, reduce the scale using the $\log$

..it might be just me, but I think we all are reading this question wrong. This is 7th grade, so I don't think the teacher is asking for a specific proof of that assertion. The answer might be way simpler.

Notice that the question asks how you know, not why this happens.

"How do you know an exponential expression will be larger than any quadratic expression?"

The answer for that would be:

My rationale is that this "feels" a lot like "how do you know a number is divisible by 3?", to which the answer would be "when the sum of its digits is also divisible by 3".

I don't know of a simpler proof, and my honest opinion is that this is probably not the topic suitable for introduction at that level. Maybe they have a very ambitious teacher who sadly cannot identify with the ways of thinking of the students at that level, and believes that, however amazing the mere fact is (that the exponential always grows faster than a polynomial), they can provoke more amazement by introducing the proof of that fact. I expect the effect to be quite the opposite - the kids may be put off maths for life. (Majestic however it is, the middle of Pacific ocean is not the place to drop a beginner swimmer to enjoy the beauty of the ocean, so to speak.)

So your best strategy may be to not do the assignment, and wait to see what the teacher would say. At least you spare your kid from the hours of frustration of them working with you, and the teacher may end up producing some handwavy argument in the end, which we will all accept as "good enough at this stage" - and move on.

I'd use a geometric argument combined with the principle of induction to convince your son. A simple, but fairly rigorous proof that is probably understandable to a middle schooler taking algebra.

Now we just "repeat" the argument (you can use the word 'induction' if you like, but I think 'repeat' gets the idea across). Suppose that we know

for some $n$. We want to show that

we can rewrite this as

(Alternatively, not sure if they use this term in school anymore, but this way of rewriting the LHS was called "FOILing" when I was in middle school)

This inequality is definitely true, since

This can also be argued geometrically, but it's trickier to visualize in dimensions higher than 3.

If your son is interested in these types of things, then thinking about 'higher' dimensions will probably add an air of intrigue to the whole thing. The above induction step can be explained geometrically, and even still remain rigorous if a bit more work is put into it.

I posted one answer already, in which I provide my understanding of what the teacher is actually asking for.

That said, I also want to provide a weird take on this problem.

The pluses pile up faster.

The pluses pile up faster when you multiply than when you add things because you are adding them over and over.

The pluses pile up faster when you exponentiate things than when you multiply things because you are multiplying then over and over.

The pluses pile up in same speed as multiplication does.

The pluses pile up in the same speed as exponentiation does, so an exponential expression piles up pluses faster than a quadratic expression.

It's getting pluses way faster!

The number of pluses those extra numbers add are fixed, so they don't influence the speed of which the numbers grow. It may take some time, but eventually the exponential one will be getting pluses faster than the quadratic one.

Perhaps this is above the level of a 7th-grader, but a series expansion gives:

and thus the cubic (and higher) terms will always dominate a quadratic at large $x$.

So as long as you can convince your son that $2^x$ grows faster than $a x^2$, all other exponentials must also grow faster than all other quadratics.

We can show a more general result: a (growing) exponential grows faster than any power. Eventually,

Indeed, taking the logarithm, this is equivalent to

The LHS is an unbounded function and the RHS a constant. (For $x>e$, 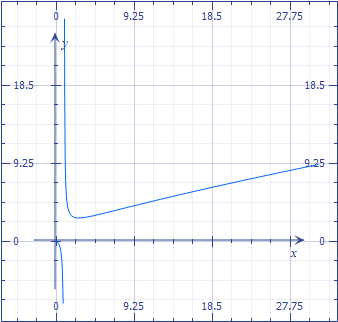