What is the deal with the three isomorphism theorems?

I've been having lectures in group theory with Hungerford's book. We were presented with the following theorem: 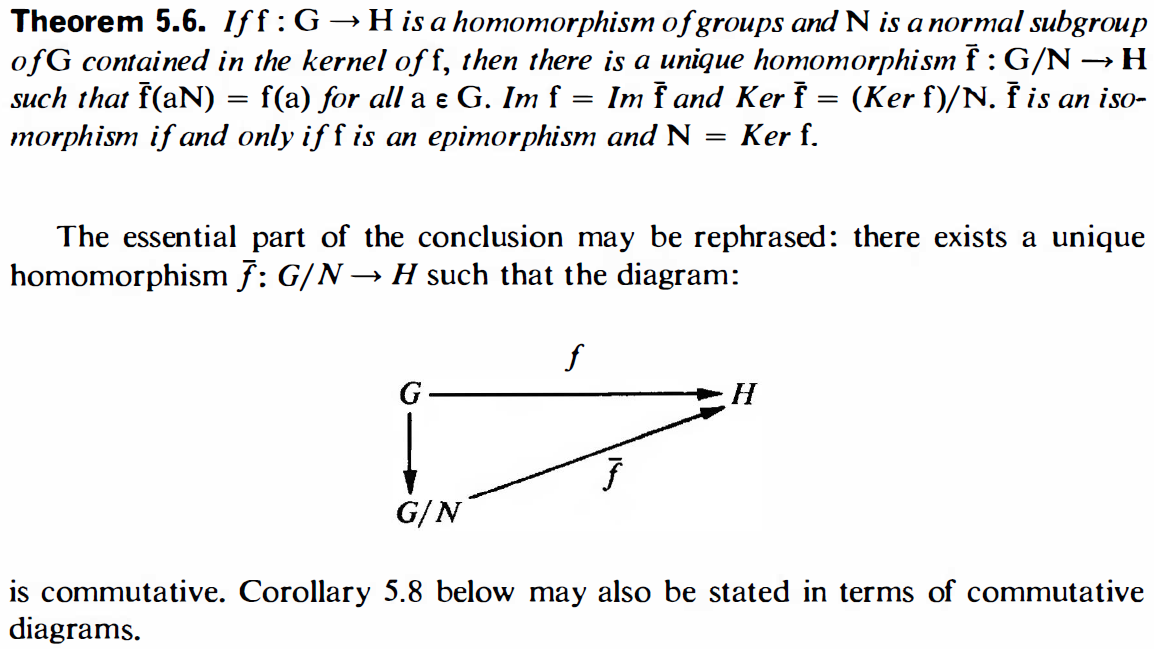 I know my guesses are maybe too obvious or wrong, but I can't figure out on my own the answer to that question. Can you help me?

Let’s say you have a group you are interested in. One way to try to understand the group is to stare at it intently until you see interesting things about it.

In addition, one can view these maps as casting “shadows” of the object $G$; with some luck, the different shadows will each be simpler than the group, and perhaps we can piece together enough “shadows” to get a full picture of what the group looks like without having to look at the full group (in turns out that is not always possible, as witnessed by simple groups, but it works for many other types of groups).

The First Isomorphism Theorem tell you that if you want to understand the way that $G$ maps into other groups, you don’t need to go scour the universe to find those groups: you can “realize” any map $f\colon G\to H$ by finding a suitable normal subgroup $K$ of $G$, and then the image of $G$ under $f$ will behave exactly the same way as the image of $G$ under the canonical (and usually well-understood) quotient map $\pi\colon G\to G/K$ behaves. So in a sense you can understand all those images of $G$ by staring at suitable shadows of $G$: just the quotient ones.

These theorems are valid in a much more general setting: they apply, suitably modified to account for some technical issues, to any kind of algebraic structure: semigroups, monoids, rings, lattices, and more. They form a backbone of investigations, tools used over and over again, because one is always looking at homomorphisms to better understand the structures, and because one is always looking at quotients to simplify matters and try to get a better sense of the object one is studying.

Not sure, how much below information can help you. But may help others and I too can get more intuitive insight of this very important theorem, by some experts.

The way I understand the group is a kind of Symmetries of an object. On which one can perform some actions. Now when it comes to comparing two groups or symmetries, what mathematical approach we can take, to find it if they are 'same' or 'similar' to some extent. we understand these by a function which maps elements(vertices,edges etc..) of symmetries to other objects symmetries, and then apply action on elements and compare how do they appear on other symmetries.

As you know isomorphism and homomorphism are the tool to compare two symmetries. Most of the time we would like to know when two symmetries doesn't result same kind of o/p , then what extent they behave same? i.e., if we give up bijection constraint and try to find what we loose and still behave somewhat similar we use a tool called homomorphism.

Now, one can ask , that what are the properties that is lost when we move from isomorphism to homomorphism, and what is still preserved? and two of the important properties are ${Ker(\phi)}$ and ${Im(\phi)}$ , So image of ${Im(\phi)}$, which help us to find out what part of the other symmetry H is going to hit by this function. ${Ker(\phi)}$ : If we sacrifice one-to-oneness, then in our structure preserving function more than one elements will hit to identity of the other symmetry. i.e, some non identity element from the domain symmetry is going to be mapped on the identity of the other symmetry. And it is the most important property which help us to find out how many homomorphism is possible between two group.

so mathematically any function which follow ${\phi (a \cdot b)= \phi(a) \cdot \phi(b)}$, has enough power to tell us something about these two groups even if it is not bijection. for ex. ${D_4 \rightarrow Z_4}$ are two different order group, but still we can find homomorphism between them.

Having these two piece of information ${Im(\phi)}$ and ${Ker(\phi)}$ we can compare narrower part of symmetries and gain some information about the structure of other group.

First Isomorphism Theorem: Here we use homomorphism to tell us something about of the structure of that symmetry via this theorem.

Hence, if you give me the homomorphism between two group, I look at the Kernel of that homomorphism, that is the normal subgroup of domain group and they are exactly the building blocks of symmetries(groups).

Not the answer you're looking for? Browse other questions tagged abstract-algebra or ask your own question.

85
Intuition in algebra?
9
Understanding the three isomorphism theorems
1
A group of functions and a subgroup $H$ in it
12
What does abstract algebra have to say about the determinant?
37
A $p$-group of order $p^n$ has a normal subgroup of order $p^k$ for each $0\le k \le n$
2
Is this hypothesis of a group homomorphism theorem actually a corollary?
16
What are some theorems made easier by Stone Duality?
2
What is the connection between $(G/K)(H/K) \cong G/H$ and this commutative diagram? (Lang's Algebra, p. 17)