Here is a picture of the mandelbrot set generated by fraqtive: 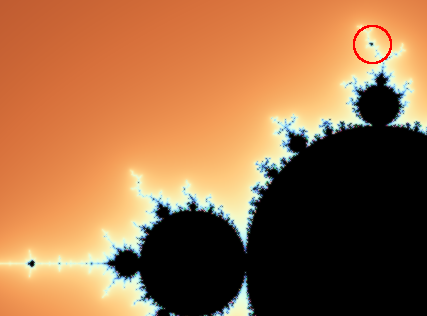 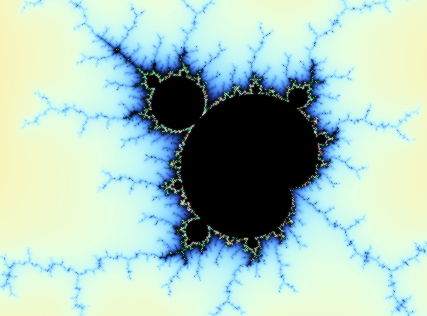 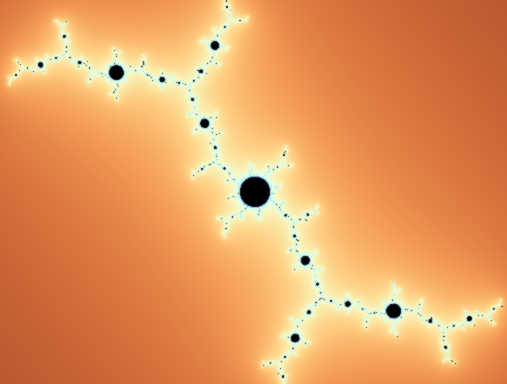 The idea to find minibrots is based on this:

if I can just find a way to recognize which julia sets are built out of circles I should be able to list the minibrots. How can I do that?

a second question which might be more easy is

I have approximate coordinates for this circular julia set, is there any way to use the z^2+c formula to find that point exactly? 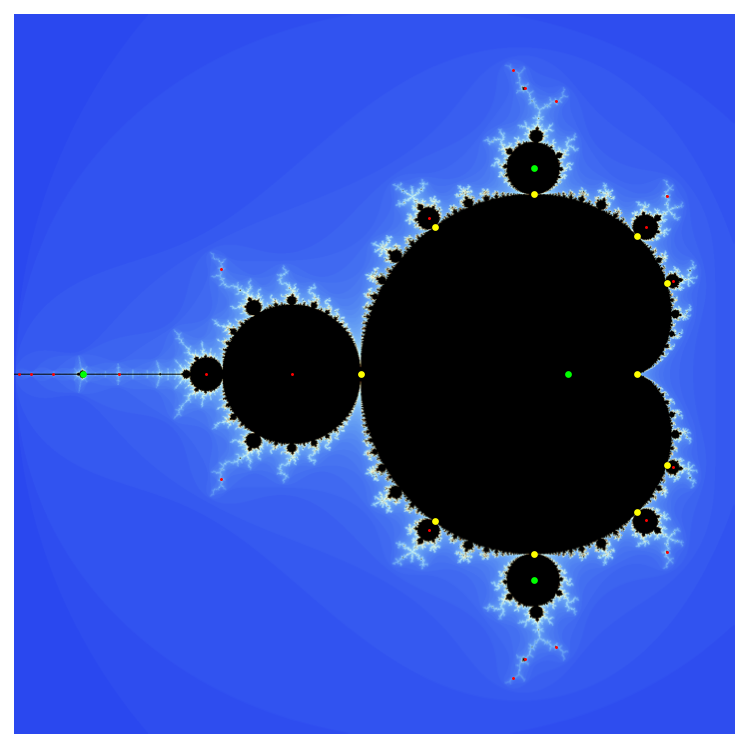 Trickier, is how to deal with the fact that this technique finds the hyperbolic center of periodic bulbs (i.e. the circles attached to the cardioids), as well as the hyperbolic centers of the baby-brots (i.e. the cardioid centers). In principle, this can be dealt with as follows: Associated with each of these points is a nearby bifurcation. The bifurcation points for the bulbs attached to the main cardioid are shown in yellow in the figure. We can distinguish a bulb from a baby-brot using the nature of this bifurcation. For the bulbs, these are all so-called period doubling bifurcations; or, really, period-tripling or quadrupling or whatever the case may be. This simply means that, as we pass through the bifurcation point along the line containing both the bifurcation and the hyperbolic center, that the period of the corresponding attractive orbit increases (or decreases) by a multiplicative factor. Associated with the baby-brots are so-called saddle-node bifurcations in which the periodic orbit (or at least its attractive nature) disappears alltogether. Thus, we can simply check the dynamic behavior for a generic point on this line opposite the hyperbolic center.

In the image below, we zoom into the top of the first image. The most prominent baby-brot corresponds to a super-attractive orbit of period 4. I've also marked the associated saddle-node bifurcation point using the technique described above. There are a few other baby-brots in this picture not marked, because the correspond to higher order, super-attracting orbits. 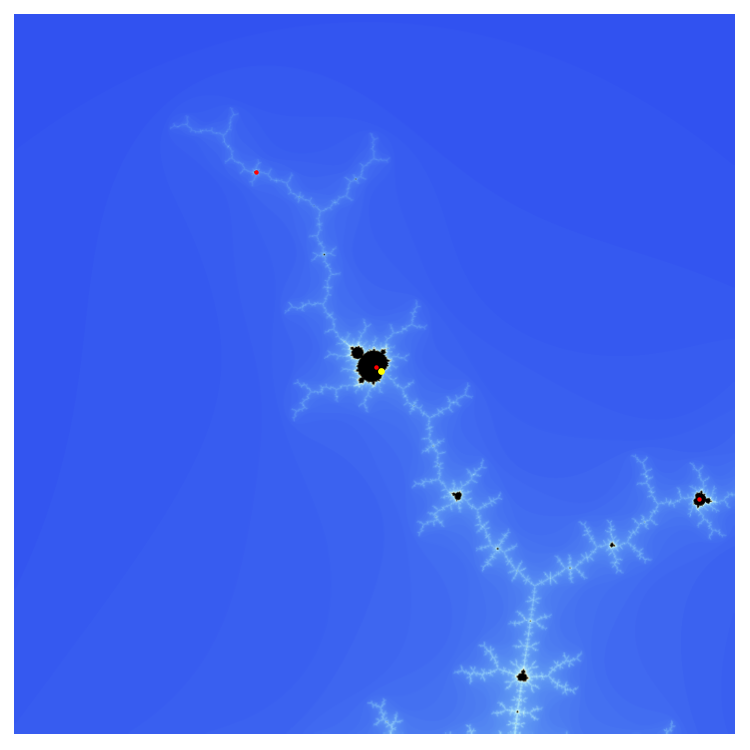 This is an answer to the question in your very first sentence.

See for instance this paper:

PDF available at the author's site.

See also The significance of the Mandelbrot set.

78
Why does the Mandelbrot set contain (slightly deformed) copies of itself?
7
Why Study Critical Polynomials?

22
Mini Mandelbrots, are they exact copies?
4
Mandelbrot bulb's countable?
6
Are mini-Mandelbrots known to be found in any fractals other than the Mandelbrot set itself?
8
Can we prove the Mandelbrot set is a fractal? Which maps/processes produce fractals?
3
Numerical computation of unlimited small Julia set details
5
Categories of fractals
7
What is the shortest path to a “little Mandelbrot” from $i$?
3
Number of bulbs of period $n$ in the Mandelbrot set.
2
Difference between limbs and bulbs in Mandelbrot Set
2
Algorithm for rendering non-filled Julia sets?