given a sample distribution with $n=15$, $\overline{x}$, and $s$, how can you use a box plot to determine if the sample distribution is approximately normal? We know nothing about the population. We can assume $N>150$. In this case the box plot is left skewed with no outliers. I’m not clear what to look for.

Ccgm_corkyCcgm_corky
11
New contributor
Ccgm_corky is a new contributor to this site. Take care in asking for clarification, commenting, and answering. Check out our Code of Conduct.
$\endgroup$
2
Add a comment  |

A sample size of only $n = 15$ is at the lower edge for doing a bootstrap CI, but you might get a more reliable 95% from a somewhat skewed sample by using a nonparametric bootstrap CI for the population mean than you would by assuming normality and using a t confidence interval.

Consider the sample below. The maximum is farther from the mean than is the minimum; a stripchart shows mild right-skewness; and a normal probability plot is distinctly non-linear. 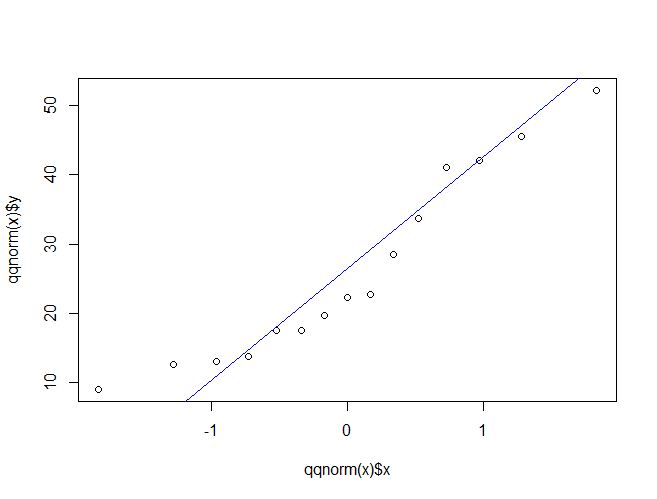 Thus, for a sample of as few as fifteen, sample x shows enough evidence of non-normality that we might be skeptical of using a t confidence interval.

To get a 95% bootstrap CI for the population mean $\mu,$ we can use the procedure below. [There are many styles of bootstrap CIs; this is one of the simplest.]

In the R code below the suffixes .re (instead of $*$'s) indicate quantities based on re-samples. [In the last step, the observed $\bar X$ returns to its role as sample mean.]

Notes: (1) An even simpler kind of 95% nonparametric bootstrap CI just finds the mean of each re-sample and takes quantiles 0.025 and 0.975 of the large collection of (2000) means as endpoints of the CI. Sometimes this kind of bootstrap CI doesn't work well for skewed data, but it doesn't do badly here.

(2) Because I simulated the data x from a gamma distribution, I know that $\mu = 24.$ So we know that in this instance both of our CIs include $\mu.$ [Of course, in a real application, we would not know for sure that the CI covers $\mu.]$ The R code used to sample the data x for the demonstrations above is shown below.