I see it and I know it's true, I just need to justify it. Everywhere in textbooks it is stated as a fact, so does it mean I can use this fact without proving it in any way when I'm solving a problem? I know that the angle between a tangent and radius is always 90 degrees, I know that only one perpendicular can be dropped from a point to the line and I also know that if two lines are parallel, they are perpendicular to the same line. Please help me combine these facts. 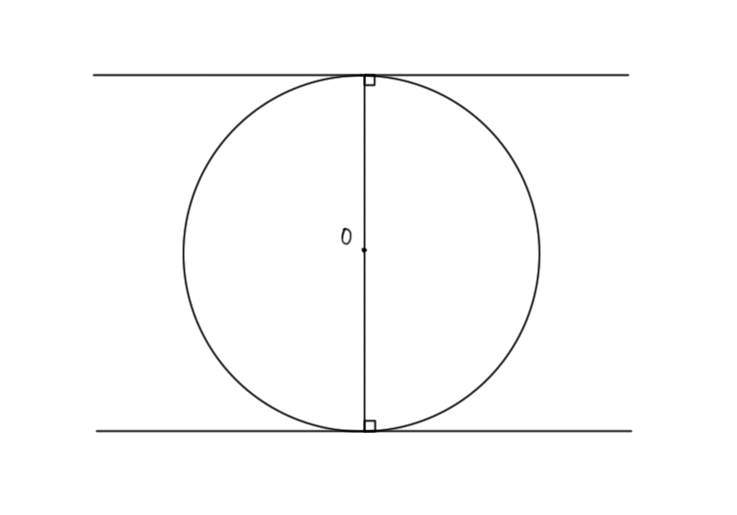 First, we need to analyze the general scenario depicted in the diagram, the special case of which OP has described in his problem statement. Let us consider two straight lines $AD$ and $BE$, which are not parallel to each other. Therefore, they intersect each other at some point, say $C$. All points, which are at equidistance from two intersecting lines, are to be found on the angle bisector of the angle formed by the lines.

Now, we are going to draw some circle, which is tangential to the two line segments $AC$ and $BC$ and lies in the space delimited by them. We know that the center of this inscribed circle is located equidistant from $AC$ and $BC$, because the lines drawn from the center of this circle to the contact points between the circle and the lines are two of its radii. Therefore, the center of this circle must lie on the aforementioned angle bisector. Furthermore, since both lines are tangents of the circle, each of the two radii in question is perpendicular to the line, with which it shares a contact point (i.e. $G$ or $H$).

In the special case, where $AD$ and $BE$ are parallel to each other, their point of intersection $C$ is at infinity making the construction of the relevant angle bisector impossible. However, the fact, that all points on this line lie at equidistant from the two parallel lines running on either side of it, comes to our rescue. According to that, the equivalent angle bisector in this instance is another line parallel to the two parallel lines. The center of the inscribed circle is still located on this line. Furthermore, each of the two radii drawn from the center of the circle to the contact points between the circle and the straddling parallel lines is still perpendicular to the line, with which it shares a contact point. Since the two lines are parallel to each other, each radius is also perpendicular to the line, with which it does not share a contact point. Therefore, two radii are coinciding to make a diameter. Since this particular diameter is perpendicular to the two lines, it is also the distance between them.

If you are agreeing with my reasoning, you can use them to prove that the distance between the two parallel sides of a general tangential trapezoid is the decisive factor for dimensioning the diameter of its incircle. If you are unable to do so, let me know. I will extend my answer to address that part of your question.