Can the tangent line be defined independently of the derivative? 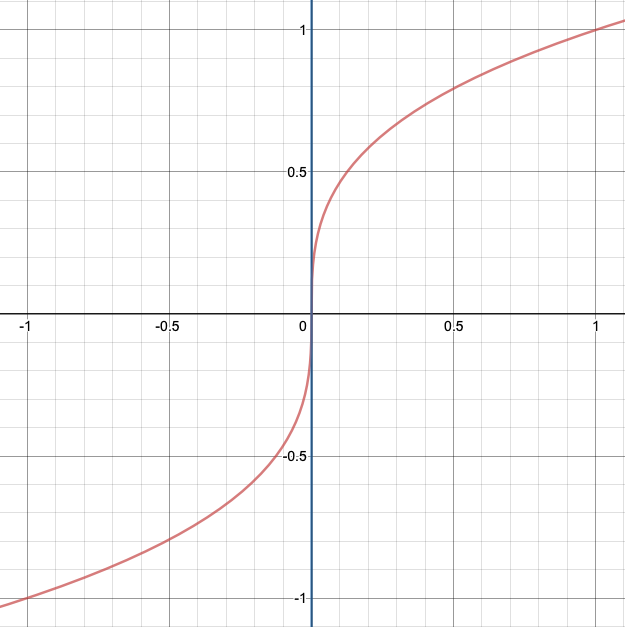 Your geometric intuition is sound. The problem about taking the derivative is an artifact of the coordinate system used to define it. This is solved in differential geometry where a space is covered by an atlas of compatible coordinate charts. This way, we can choose the right coordinate chart for the problem at hand. For example, to find the 'vertical tangent', we swap the coordinate axes, and find that this tangent is now 'horizontal'. Of course, the terms 'horizontal' and 'vertical' relate to our choice of chart. In more invariant geometric language, what we want to understand is how the curve actually curves in the plane. And what we see is that the location of your 'vertical tangent' is better described as the location of an inflection point

(In more sophisticated treatments of differential geometry for singular spaces or infinite-dimensional spaces it's seen that they diverge again, though of course there remains an intimate relationship. For example, in Michors & Kriegl conveniant calculus for infinite dimensional spaces it is the geometric tangent along curves that takes the starring role and the derivational is dispensed with. The same goes for Neeb's development of calculus in locally convex spaces (again it's the infinite-dimensional context that is important). In contrast, in Souriau's diffeology and developed by Isglesias-Zemmour (important for both infinite-dimensional and singular spaces and vastly more general than the foregoing), a notion of smoothness is introduced that is inspired from topology. Here, Christensen after correcting a definition by Hector and Laubinger, shows that there are distinct geometric and derivational tangent vectors. They are not the same here, but of course they are in many natural cases).

You won't find a definition of the tangent line that is completely independent of the general concept of derivatives, since they are so intimately connected. But from the point of view of differential geometry, you can most certainly have vertical tangent lines. To this end, we have to slightly shift our point of view: we're not looking for tangent lines to the graph of a function, but to some smooth set of points, which happens to be easily described as the graph of a function. More rigorously, we're interpreting the graph as a smooth submanifold of $\mathbb R^2$. In this case, the tangent line at $p$ can be parameterized as $t_p(\tau)=p+\tau v$, where $v$ is a nonzero vector tangent to the manifold at $p$, in this case $(0,1)$, for instance. Of course, to find such a vector, we'll end up using derivatives anyway: we'd parametrize the manifold, say by the smooth curve $\gamma:\tau\mapsto(\tau^3,\tau)$, and then take its derivative at $\tau=\gamma^{-1}(p)$ (since $\tau=\gamma^{-1}(p)$ yields $p$ when inserted into $\gamma$). This derivative is a vector tangent to the parameterized curve/manifold at $p=0$.

Not the answer you're looking for? Browse other questions tagged calculus derivatives tangent-line or ask your own question.

6
How can a function have a vertical tangent and be continuous?
7
What is a the intuition behind a parametric equation?