Consider the leaves from a bunch of trees in a terraced plaza in the Autumn. It may well happen that the tiles of the terrace are squares whose length easily exceeds the length of the stem of the leaves (assuming leaves all of the same kind). Cannot this be regarded as a Buffon process? That is, if you took a photograph of it and counted the line crossing of the leaf-stems with the lines determined by the tiles, you would get Buffon's calculation for pi. Furthermore, you could do this even in the absence of the tiles, simply by imposing an appropriate tiling over the photograph later, right? And if we can impose a tiling later, what about imposing it on a TV program, with respect to some recurring object? Would that, properly done, not constitute a Buffon process as well?

edit: It might apply to sunspots as well, because sunspots, during solar min, typically have low latitudes, i.e., they occur near the equator of the sun, which can be considered as approximately a flat surface, and each sunspot approximates a highly non-smooth Jordan curve, which therefore almost always is going to have a unique greatest diameter, which can be considered as the needle. Sunspots vary greatly in size, so we could restrict our attention to ones of a given size (most likely the smaller ones, so as to maximize the number of sunspots considered), and then consider the circles of latitude, starting at the equator, separated by a distance a little bit greater than the needle length (perhaps, such that the needle length is 5/6 that of the circle separations, in imitation of what Mario Lazzarini did in 1901.) Of course, since we’re considering solar min, we might want to consider all sunspots over, say, a 22-year period, so as to get a lot of data points (trial tosses of the needle). So, how good an approximation to pi would be get? – and is there any correlation between how good an approximation we get and certain solar events such as flares?

Let's do an experiment! Here's a deck with leaves on it: 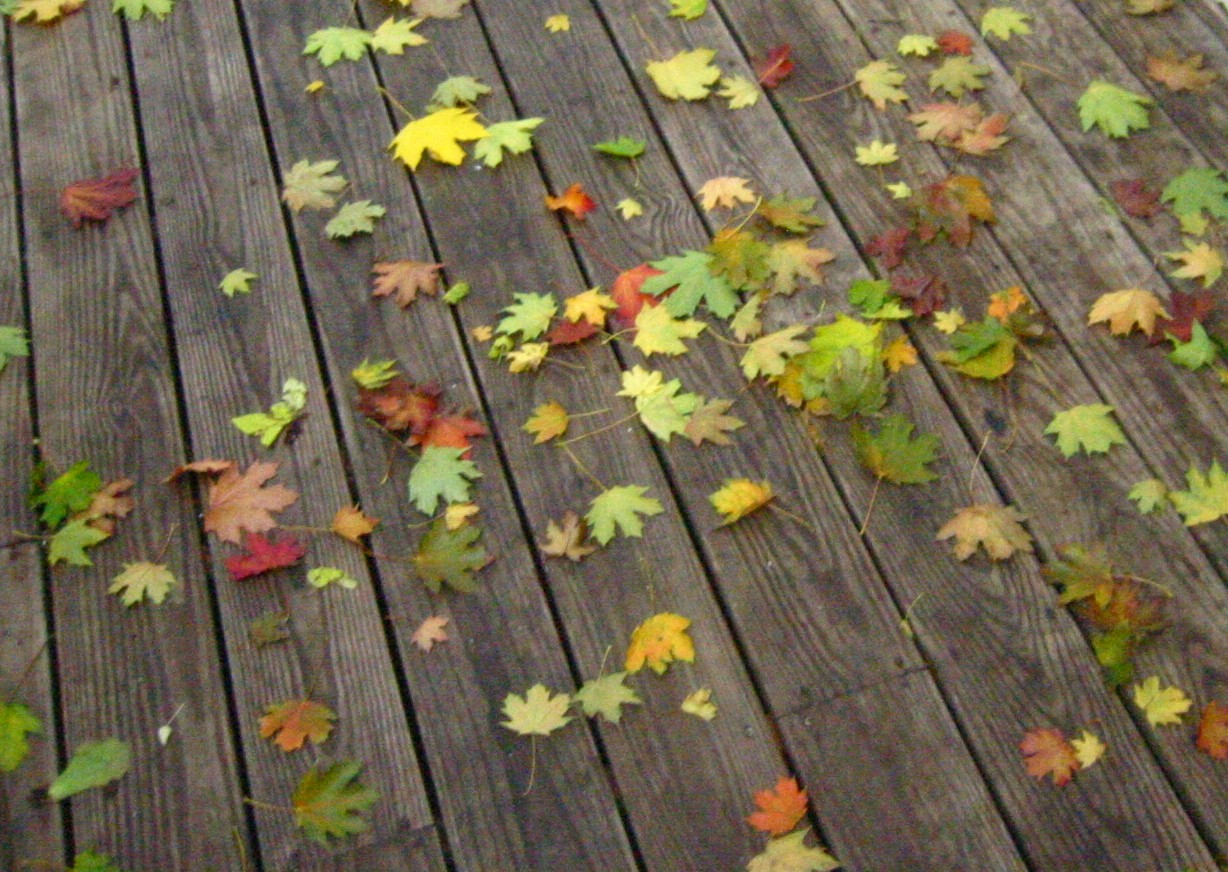 Counting the leaves, I see about 100 leaves. Now lets assume all the stems are the same size, even for the larger and smaller leaves. Also let's try to visualize stems on some leaves which don't seem to have stems. Interpolating, I see about 30 crossings.

or with around 100, leaves, we'd expect to see $100/\pi\approx 32$ crossings. Not bad, since we counted 30, which gives our experimental approximation of $\pi$ as 3.33, and since I probably counted pretty poorly, I probably have a standard error of around three leaves, which puts $\pi$ within our experimental error. By the way, it can be shown that we used an unbiased estimator for $\pi$, whose mean-square error scales something like $1/n$, where $n$ is the number of leaves, so we should get a somewhat accurate guess of $\pi\approx 3.14$ past around 1000 leaves. I leave that experiment to you.

15
Expectancy value for the percentage of points lying in the Convex Hull (3D)
4
probability of sample variance lying between values
1
poisson distribution and the cdf
0
Sample Estimate of the Mean of a Population Lying in [a,b]
0
What is the probability that the test shows that a person is lying?
0
what is the interval within which C has a probability of at least 0.75 of lying?