I'm going through John Stillwell's Four Pillar's of Geometry and trying to follow the book's structure when doing the exercises. Generally, a 'pillar' is divided into two chapters; the first chapter states useful results and motivation while the second chapter brings the machinery to do the proofs. 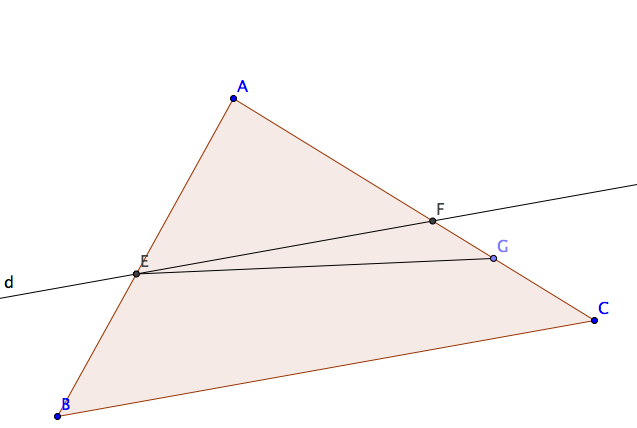 Thales' Theorem: Suppose that the line EF is parallel to BC. Then AE/EB=AF/FC.

Prove Converse Thales' Theorem: Suppose that EG is not parallel to BC. Then AE/EB not equal to AG/GC. Equivalently, AE/EB=AG/GC is sufficient for EG parallel BC.

The issue is that I don't think I'm 'allowed' to use much. The ideas of similar triangles, SAS, etc. have not been developed. I know that without having the book in front of you it's hard to judge what can be used but essentially I'm looking for the dirt simplest proof. From what I can see the only known facts are Thales theorem and that was only stated.

If clarification is needed I'll be glad to answer in the comments.

Proof of the converse of "Thales Theorem":

Assume $EG \nparallel BC$. Then there must be another line intersecting point $E$ of side $AB$ as well as some point, say $F$, of side $AC$ that is parallel to $BC$. So, let $EF \parallel BC$.

But $EF\parallel BC$, and hence it cannot be the case that $EG = EF \nparallel BC$.

Therefore, if a line divides any two sides of a triangle in the same ratio, then the line is parallel to the third side: i.e. the converse of Thales Theorem has been established.

Try for an indirect proof and use the (forwards) theorem on the parallel line in your linked picture.

7
Is triangle congruence SAS an axiom?
-1
Prove the shape is a trapezoid
0
Showing shortest distance between points on a triangle to prove parallel lines

0
Tranversal parallel lines theorem
0
Prove perpendicular bisectors of non-parallel lines intersect
1
Proportionality and Thales Theorem
0
Thales Theorem and Similar Triangles
2
Converse of Thales' theorem
0
Thales theorem and relation
0
If $\bar{AD}=r\bar{AB}$ and $\bar{AE}=r\bar{AC}$, is $\bar{DE}\parallel\bar{BC}$?
0
Confusion about the Thales theorem
0
Converse/inverse/contrapositive of "If line $A$ is parallel to lines $B$ and $C$, then lines $B$ and $C$ are parallel."