I'm trying to compute the turning number of a closed plane curve, which should be a really straight forward computation. But my result is not a whole number, i.e. the total curvature is not a multiple of $2\pi$, which is impossible so I'm making a mistake somewhere. I know from plotting the curve that the turning number should be $-2$. I've been looking for hours but cannot seem to find it. Maybe someone can spot the mistake... Here is my work:

where $L$ is the period of $\beta$ and $K_{\beta}(t)$ is the curvature. I can compute the curvature like this:

This is giving me the curvature

At this point I integrated the curvature with the help of Wolframalpha, which did it numerically but I'm pretty sure it's $-2\pi-1$, when from the picture it should be $-4\pi$. Oddly enough, if I integrate the curvature without the power of $\frac{3}{2}$ in the denominator i actually get the correct result. Can anyone help me spot my mistake? Thanks a lot!

Edit: Here's a link to see the graph: https://www.desmos.com/calculator/vcxbpj2ios

I found my mistake! Posting it as an answer, so future viewers can see what is happening. The issue was not the computation, but misuse of a formula. The thing is that the formula I wanted to use for the turning number, i.e.

may only be used for curves that are parametrized by arclength. Since curvature is invariant under reparametrization I just assumed that it would work the same way. But the reparametrization-invariance actually gives us

where $\beta \circ \varphi$ is a reparametrization of $\beta$ by arclength. So what I ignored was the $\varphi(t)$ as the argument of the curvature. If we account for this, by a change of variable we get

which evaluates to $-4\pi$, giving the turning number of -2, which is exactly what it should be.

Is this your curve, given by your equations? 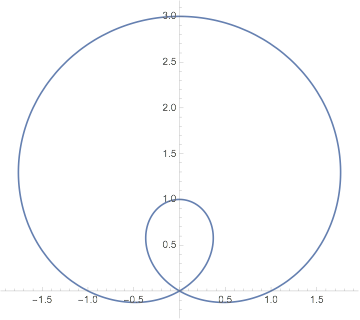 Not the answer you're looking for? Browse other questions tagged geometry curves or ask your own question.

2
An alternative formula for computing curvature of a curve
0
Parametrize curve by arc length
2
Curvature and turning number of $t \mapsto (\cos(t), \sin(3t))$
1
How to show curve is closed on non-closed interval
0
Is total curvature of a closed space curve a multiple of $2\pi$?
3
Winding number of a curve (not complex analysis)