How to get the necessary acceleration for a block to remain in place when pushed by a wedge?

The figure from below represents a wedge which has a mass $M$ which is being pushed by a force $F$. On the top of the wedge there is a small block whose mass is $m$. Assume the wedge $M$ and the block $m$ are frictionless. Given this information. Find the value of the force $F$ so that the block $m$ does not slide over the wedge. 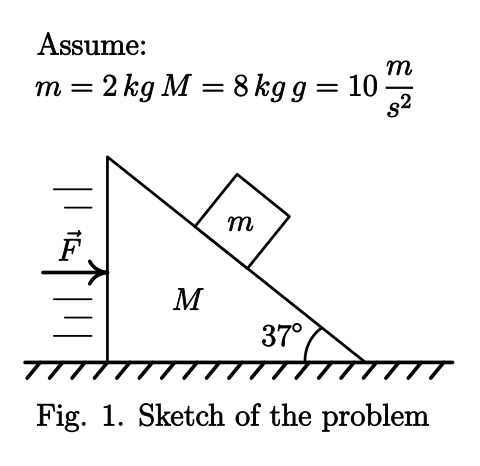 The alternatives given in my book are as follows:

So far, below are the forces in the FBD which I made. I'm not sure if these are the only ones acting, thus I need help if the vectors are put properly. 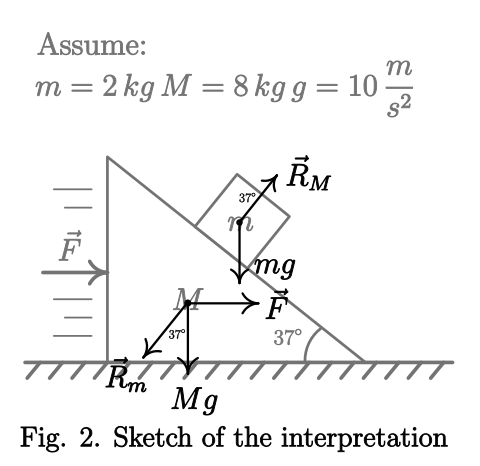 As it can be seen my source of concern is. The problem does not indicate anything about the floor. It doesn't say that it is rugged or whatsoever. So what should I suppose?.

This is the reason of my doubt?. Because as it stands it seems that the only way to get $F$ might be using terms of equilibrium.

But are the following equations correct?. Do they make sense?.

Hence by introducing the given values it would be:

But this doesn't appear in the alternatives. What's exactly the right interpretation here?.

Can someone help me here?. I'm stuck exactly if is correct my interpretation of the vectors. Does it exist a way to know if should I include the component of the friction on the floor?.

The misleading part is, how to account for that?. I mean it is not given the value of the coefficient of friction for the surface. In my question I used the word acceleration, but is this necessary in this scenario?.

Then the force equations for $m$ would be

Not the answer you're looking for? Browse other questions tagged algebra-precalculus vectors physics classical-mechanics or ask your own question.