By considering a random bipartite three-regular graph on $2n$ vertices obtained by picking three random permutations between the two color classes, prove that there is a $c > 0$ such that for every n there exists a $(2n, 3, c)$-expander.

This is question 9.6.1 from The Probabilistic Method and I am tempted to argue that for any $c\le 1$ the graph is trivially an expander.

In the question we are asked to consider the 3-regular bipartite graph obtained by taking the edge union of three permutations on $[n]$. A permutation is basically a perfect matching, therefore this construction contains a perfect matching and by Hall's theorem, every subset $W\subset[n]$ satistifes $|N(W)|\ge|W|\ge c|W|$, in particular for sets $|W|\le 1/2$.

But then these hints from this website point to a completely different approach. I would be interested in additional hints on how to compute the probability that $N(W)<(1+\epsilon)|W|$ for a given $W\subset[n]$ as they say in the hints.

You might have been confused by the definition of $N(W)$. Usually this just means "the set of vertices adjacent to $W$". In the definition you've quoted from Alon and Spencer, we don't include vertices that are in $W$, which is the standard thing to do for measuring vertex expansion.

For a family of connected examples with bad expansion, consider the prism graphs, such as the one below: 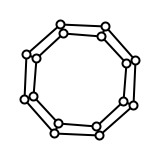 So, no: not all bipartite cubic graphs are expanders.

Not the answer you're looking for? Browse other questions tagged combinatorics graph-theory bipartite-graphs probabilistic-method or ask your own question.