Non-unique solutions for ODE with boundary conditions at infinity

I am looking for solutions to equations such as

There is a trivial solution $y(x) = 0$. On intuitive grounds (please see physical background below), as well as noting that the origin is a hyperbolic point for a dynamical system governed by the related system of equations, another solution is expected as well, with boundary conditions $$ \begin{cases} \lim_{x \pm \infty} y(x) = 0 \\ \lim_{x \pm \infty} y^ \prime (x) = 0 \end{cases}$$

This fact does not contradict the unicity theorem, as far as I understand, as the latter deals with boundary conditions on the real line, I believe.

Now to my problem, what numerical scheme could be used to get the non-trivial solution? Anything I could think of will pick the trivial solution branch only. Further, I would be grateful for theory references on the possibility of multiple solutions for boundary conditions at infinity.

Things would be different if $\beta$ were equal to $0$. In that case it is easy to determine two boundary conditions (also clarified in the physical background section below) for $x = 0$, and any numerical method will handle it easily.

The ODE is the Euler-Lagrange equation for the functional

If $\beta = 0$ the non-trivial solution is amenable to a simple solution. The energy functional reduces in such case to

and these allow any numerical scheme to pick the non-trivial branch.

If $\beta \neq 0$, this simple reasoning fails for the full fourth-order ODE (I also thought about converting the fourth-order ODE to a system of equations, to attempt a similar interpretation for a system of four particles, but did not get anywhere yet, apart confirming that a second non-trivial solution exists). I am hence left with the boundary conditions a infinity, and cannot get any solution other than the trivial one.

To sum up, I would like to be pointed towards references for the non-unicity of solutions when boundary conditions at infinity are applied, and to understand how to numerically solve similar problems.

The ODE has a physical interpretation and I was unsure whether the question were more apt for Physics StackExchange, or even SciComp StackExchange. I would certainly re-route if advised, I thought to start here as ultimately the question is primarily on the maths, thanks a lot.

You can use a linearization procedure to solve this nonlinear boundary value. For instance using a linear approximation scheme consisting in iterations over the linear ODE

given $y_0$ and the boundary conditions

We will approach this solution using negative $\beta$'s as follows in the attached MATHEMATICA script. 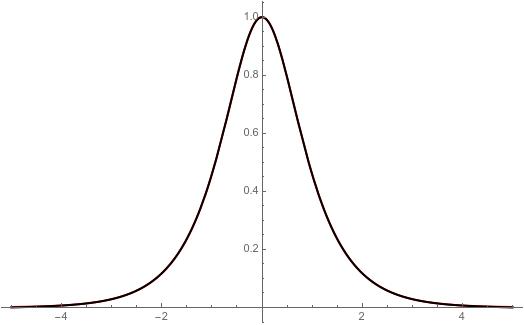 In the far field at $y=+\infty$ you have that everything is zero, so on the approach you get small values. This allows to ignore the higher-degree terms in $U(y)$ resp. $U'(y)$ and reduce the equation to an approximate linear DE $$ βy^{(4)}-y''+2αy=0. $$ This has a characteristic polynomial $$ 0=βλ^4-λ^2+2α\implies (βλ^2+\sqrt{2αβ})^2=β(1+2\sqrt{2αβ})λ^2 $$ etc. Better find the roots numerically. Looking closely, one can read off that the solutions come in pairs with positive and negative real part. For the part to positive infinity the coefficients to the roots with positive real part have to be zero. This can be translated into a boundary condition at some large finite point.

The same can be done for the far field in direction of negative infinity.