What is the smallest polyomino that can't surround a $1\times 1$ hole?

Given a polyomino $P$, we can ask if it is possible for disjoint copies of $P$ to surround a single cell in the square grid - i.e., for the complement of their union to have a connected component of size $1$.

We can further refine this into polyominoes that weakly surround a cell (just covering the four edge-adjacent cells) and those that strongly surround a cell (covering all $8$ squares which share a vertex with the hole). Thanks to Julian Rosen for clarifying this distinction.

My original intuition was that this is always possible, but I was having trouble proving it; after enough struggling to show it was true, I started searching for counterexamples. Here is a polyomino with $48$ cells which does not even weakly surround a one-celled region, which is not too difficult to verify by hand: 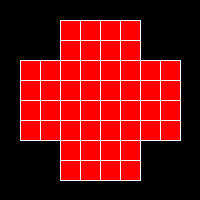 After some modifications, I've reduced this down to a simply-connected solution with $26$ cells: 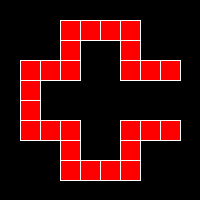 I have a size-$23$ example of a polyomino which does not strongly surround a hole: 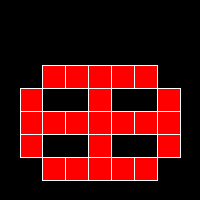 What is the smallest polyomino that cannot surround a single-celled hole? I am interested in this question for both the weak and strong cases.

I've written some code to explore this, and have confirmed that all of the $1,227,708$ free polyominoes on at most $14$ cells can strongly surround a hole. How much can we tighten these bounds?

This is by no means a complete answer, but as I mentioned in my last comment, we can make some headway by restricting a computer search to particular symmetry classes. I've been able to check all the free polyominoes of size $N \le 23$ that have a horizontal or vertical symmetry axis (a class that contains OP's size-$23$ non-strongly-surrounding example). Within this symmetry class, there are no non-weakly-surrounding examples of size $N \le 23$, and the smallest non-strongly-surrounding examples have size $N=23$; so OP's example is minimal. Of the $464188$ size-$23$ free polyominoes with a horizontal or vertical axis of symmetry, there are just two that cannot strongly surround a single cell: the example given in the question, and the polyomino pictured below. 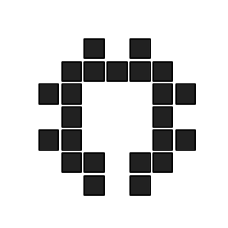 Heuristically, one might expect minimal examples to have some symmetry, because symmetric polyominoes have the fewest "different-looking local regions", and hence the fewest different possibilities for packing local regions around a hole. Next steps, then, might be to check the other two large symmetry classes for free polyominoes: $180^\circ$ rotational symmetry around a point, and reflection symmetry across a diagonal.

Update: Checking the polyominoes with rotational symmetry around a point turned up the following minimal (within that class) non-strongly-surrounding example, with size $20$: 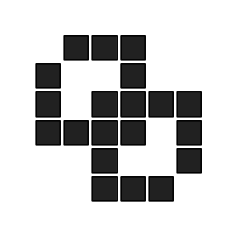 Second update: Checking the polyominoes with a diagonal reflection symmetry, there are exactly two minimal (within that class) non-strongly-surrounding examples with size $19$. One is formed by removing an interior cell from the previous example (as already pointed out in a comment), and the other is new: 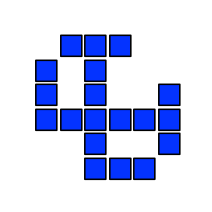 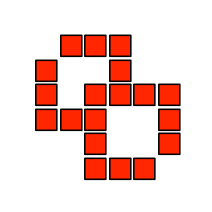 Third update: In order to make progress on the non-weakly-surrounding case (which is a more stringent criterion, so the minimal examples are at least as large), I looked at polyominoes with both vertical and horizontal reflection symmetries. The size-$25$ example below provides an improved upper bound for this case. 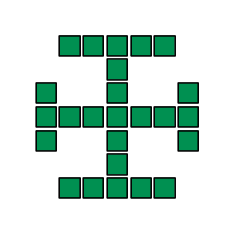 Not the answer you're looking for? Browse other questions tagged recreational-mathematics polyomino or ask your own question.

7
How good can a “near-miss” polyomino packing be?