If $A^p$ is ergodic, does that make $A$ ergodic? And possible circular proof?

I am reading Walters' Introduction to Ergodic Theory and am struggling to make sense of the proof of Theorem 1.10. I have an issue with understanding the overall structure of the proof, and with a component of the proof itself. 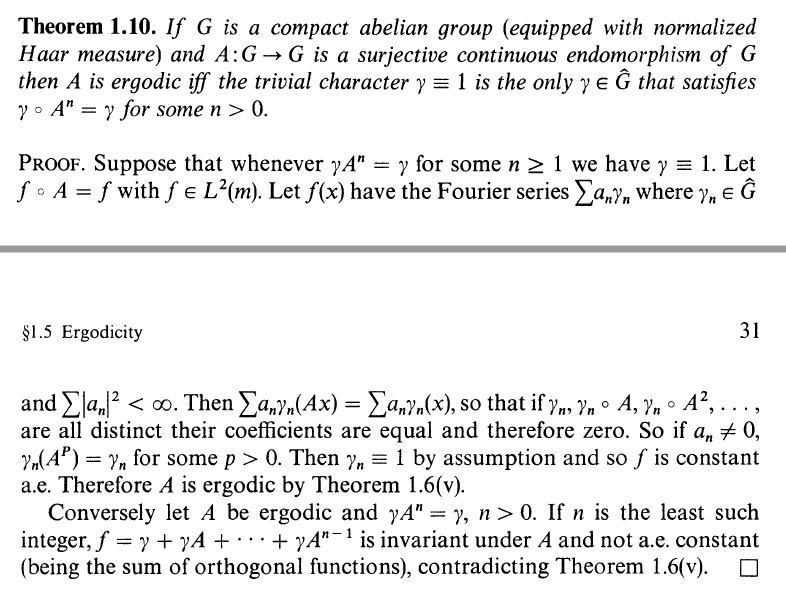 Issue regarding the proof:

in my mind just doesn't follow. Doesn't this show that $A^p$ is ergodic, not $A$?

Issue regarding the structure:

At the beginning of the proof, an assumption is made and is later invoked to make a conclusion. How does saying

allow us to use that later on to prove that having the trivial character is the only $\gamma \in \hat{G}$ that satisfies $\gamma \circ A^n = \gamma$. It seems rather circular?

Not the answer you're looking for? Browse other questions tagged harmonic-analysis ergodic-theory or ask your own question.

6
Ergodic proof of Khinchin-Levy
4
Two questions regarding the ergodic decomposition theorem
1
Manipulating ergodic Markov chains in order to make them non-ergodic
5
Ergodic Theorem and flow
5
Questions to the proof of the $L^p$ Ergodic Theorem of Von Neumann
1
If $\lambda, \delta \in \widehat{G}$, where $G$ is compact abelian and $A$ is ergodic, then $(U_A^n \lambda, \delta) = 0$ eventually
1
Error in proof of $L_p$ equivalent weak-mixing conditions.
1
Show that map is ergodic
1
Does product measure being ergodic imply component ergodic?