Can we combine this two Lyapunov functions (which imply local stability by separate) to conclude global stability?

My goal is to conclude that for this system (with a particular $f$ I have) the origin is globally asymptotically stable. So far, I have found two Lyapunov function candidates $V_1(x),V_2(x)$ which both are positive definite and radially unbounded. Moreover, I managed to show that they comply

If it was the case that $r_1>r_2>0$ instead of item 3), we would be done: global stability follows since item 2) ensures that $x$ reaches $\|x\|\leq r_2$ in finite time from any initial condition, and then one can use 1) to conclude $x$ reaches the origin asymptotically from here.(as pointed out in the comments, this argument requires nuance, nevertheless, the important part is the following). However, from item 3) this is not the case. Thus, I have this disk $r_1<\|x\|<r_2$ in which my Lyapunov stability test is inconclusive. My hope is to show that trajectories $x(t)$ cannot stay in the disk $r_1<\|x\|<r_2$ forever but ultimately reach $\|x\|<r_1$.

My question is: from the information given here, do you think is possible to conclude global asymptotic stability either by constructing a new Lyapunov function from $V_1,V_2$ or by checking some condition on $f$ to conclude trajectories cannot stay in $r_1<\|x\|<r_2$?

Indeed, there are many counterexamples in which this is not possible. But my question here is if there is a way to check if it is possible: what properties do you suggest me to check for $f$. I'm looking for suggestions, ideas or relevant bibliography that you think can help me.

EDIT: In case this problem is easier, or adds useful information, I can also show the following instead of the original items:

We are left to show that there are no invariants in $D$.

EDIT 2: After some discussion in the comments, I think the main essence of my question, is more on what happens when the Lyapunov arguments are inconclusive on this non empty set $D$ (bounded, but not containing the origin). A concrete diagram for the state space of what $r_1,r_2,M_1,M_2,D$ looks in the case I am interested is the following: 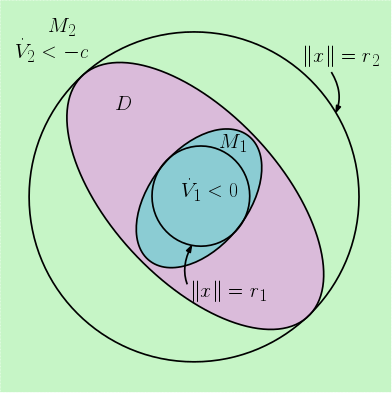 We start considering the case when we have bounds on the levels of $V$, and we will use these results to study the original question later.

We need the constant $\delta$ because otherwise, it is possible that $x\to\Omega$ asymptotically and we never switch to $V_2$.