Is it possible to find the control points of a quadratic bezier curve, given the starting, ending and stationary point?

I know from this question on SO that it is possible to get the stationary point of a bezier curve given the control points, but I want to know wether the opposite is true:

If I have the start and end points of a Parabola, and I have the maximum point, is it possible to express this a quadratic bezier curve?

I have seen this answer explaining that you usually would need 6 points on a cubic to effectively describe a bezier curve, but looking at the question itself, it describes a few special cases where you can find the control points on a cubic, and I am curious on wether a quadratic bezier curve has such points, and wether a stationary point is one of them

The variable t of the stationary point is not avalible

I am coming from a computer science background, and although im not too weak in math, any answers/articles that don't use complicated maths and keep it simple would be appreciated

If $(x_1,y_1)$ is the parabola's vertex, the third equation may be obtained from this diagram:

The curve's tangent at the vertex is perpendicular to the line passing between the midpoint of the curve endpoints and the third control point, i.e. $$\begin{bmatrix}\frac{x_0+x_2}2-x\\\frac{y_0+y_2}2-y\end{bmatrix}\cdot\begin{bmatrix}x'(t)\\y'(t)\end{bmatrix}=0$$

Let $P_0$ and $P_2$ be startpoint and endpoint of a quadratic Bézier curve. If by "maximum point" you mean that point $Q$ on the curve which is at the maximum distance from line $AB$ (this is not the same as the vertex of the parabola, in general), then finding the control point $P_1$ is easy, because $Q$ is the midpoint between $P_1$ and the midpoint $M$ of $AB$. 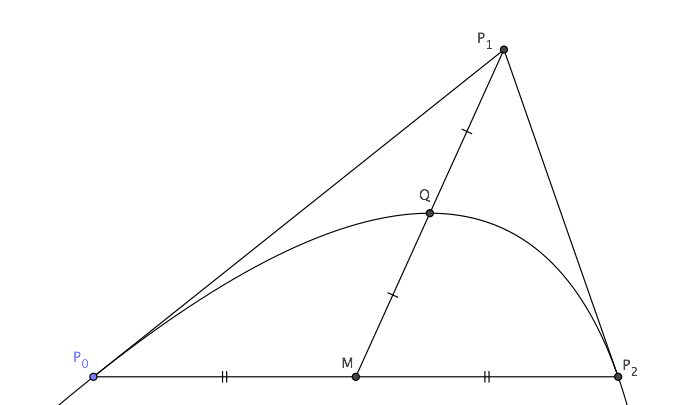 Not the answer you're looking for? Browse other questions tagged conic-sections bezier-curve or ask your own question.