Is there a way of connecting manifolds together in a higher dimension?

This question might be very naive since I haven't taken much topology or differential geometry yet; so please make the answer more conceptual than mathematical. We can think of a two dimensional sheet as joining an infinite number of one dimensional lines along a second dimension that doesn't exist for the lines. This also works if the surface is curved, only now, the lines are one dimensional curves.

So, in a sense, spaces can be joined together along a higher dimension if the lower dimensional spaces change slowly enough as we move along the higher dimension - or else we would not have a smooth surface at the end. If what I meant is not clear, the image below might explain it better: 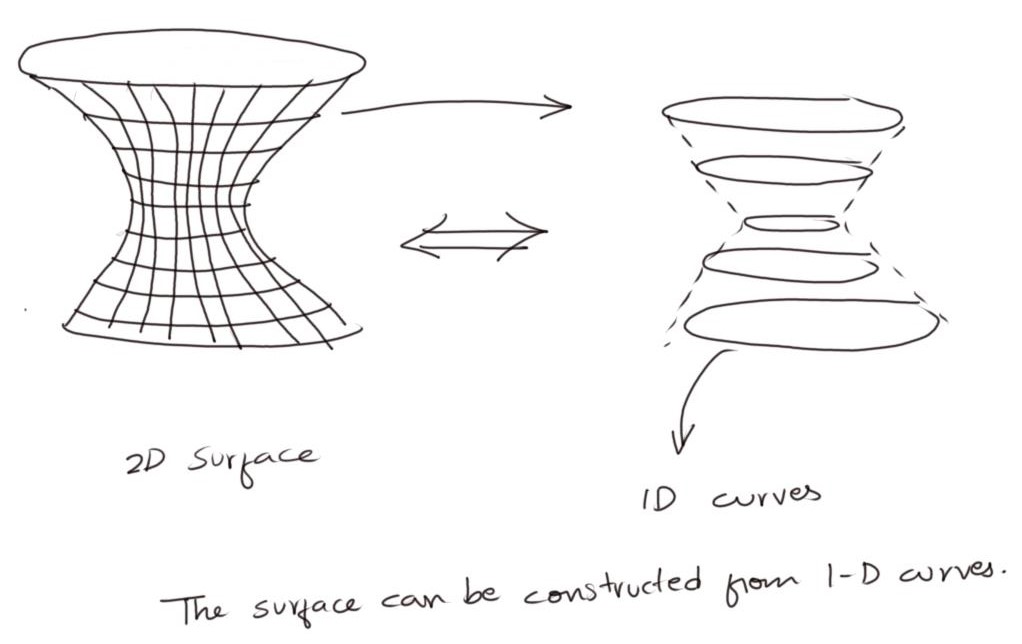 In a sense, what I mean by the curves changing too fast is that after combining them, the resulting surface might not be continuous or differentiable (but I suppose I can only say this if the surface can be embedded in a euclidean space).

So my question is this: given an infinite set of manifolds (reasonably smooth or continuous and not necessarily reimannian) of dimension "n", is there a way to connect them like above in a higher dimension to give us a n+1 dimensional manifold?

If so, what conditions do the manifolds need to satisfy (conceptually)? If this question is too mathematical to answer conceptually, please list a few sources or let me know what this is called so that I can read about this myself.

This is a good question and there are a couple of different ways to make it precise, all of which lead to quite interesting mathematics. One is to ignore everything happening in the "middle" and focus on the "ends"; that is, we will settle for connecting two manifolds, forget about infinitely many for now. Then what you are talking about is known as a cobordism between two manifolds $M, N$, meaning a manifold in one higher dimension whose boundary is $M \sqcup N$. If a cobordism exists between $M, N$ they are said to be cobordant. As a simple example, the pair of pants is a cobordism between a circle $S^1$ and two circles $S^1 \sqcup S^1$: 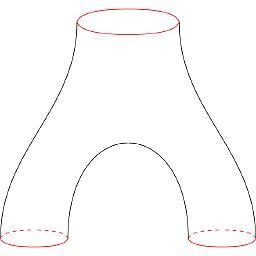 If you slice up a pair of pants and think of it as a "movie" going forward in time you'll note that in the middle you get a wedge of two circles, which is not a manifold. This sort of thing is investigated in Morse theory, which is a whole fascinating topic in itself and about which I will say nothing more.

As a general question we can ask:

You might think that this is a hard and deep problem in manifold topology. Remarkably, for closed $n$-manifolds this question has a more-or-less complete answer due to Thom. Associated to any such $n$-manifold is a bunch of numbers called the Stiefel-Whitney numbers, which take values $\bmod 2$, and Thom showed:

The simplest Stiefel-Whitney number to explain is called $w_n$, and it's given by the Euler characteristic $\bmod 2$. It's a nice exercise to show that this is a cobordism invariant, meaning that if $M$ and $N$ are cobordant then $\chi(M) \equiv \chi(N) \bmod 2$.

There's a whole lot more to say here about cobordism rings and so forth but this is a good place to stop for now, I think.

Not the answer you're looking for? Browse other questions tagged manifolds differential-topology geometric-topology or ask your own question.