I'm working on a coding project at the moment where I have to integrate a function around a trefoil knot. I'm using the following parametrization to do so.
$x = \sin(t) + 2\sin(2t)$
$y = \cos(t) - 2 \cos(2t)$
$z = -\sin(3t)$
which is copied from wikipedia. When I actually integrate my function in code I want to make sure that I don't go ahead and pass a point on the knot to the integration routine. If I do that it blows up. I'm trying to integrate the electric potential around a charged knot. It has the following general form
$$\varphi=\int_0^{2\pi} \frac{|r'(t)|}{|x-r(t)|}\,dt$$ where the denominator of the fraction is the distance from a point to the knot itself. You can see that if the point is a position on the knot itself you get $0$ in the denominator and the function explodes.

I guess I don't understand your problem. You plot this function and it looks like the knot: 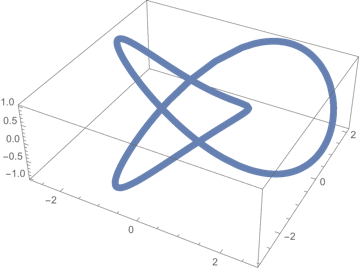 Then you take your function (which you haven't specified) and integrate along this knot.

Not the answer you're looking for? Browse other questions tagged trigonometry inverse knot-theory or ask your own question.

4
Trefoil knot and Figure 8 knot are prime knots
3
Trapping a sphere in a trefoil knot
1
Integral $\int_0^{\pi/2} \sin(ax)\cos(x)\,dx$
2
Parametric Surface Equations for Orthogonal Projection of Torus Knot Tube onto Torus
0
Why does a a torus knot parameterization invert the sign of the z values?
2
Map of $\mathbb{R}^3-Knot \to S^1$
3
Maximize integral over a 3D knot - how to make my intuition rigorous?