My attempt has been the following:

Since $\sin(42^\circ)$ and $\sin(78^\circ)$ have nested radicals, I tried to get rid of them by restricting my basic tiling units to only the $60^\circ$-angled isosceles trapezoids and parallelograms that are a single row of the triangular tiles. They have shorter-base-to-leg ratios of the form $$m\cdot\frac{9-3\sqrt{5}}{2}+n\cdot\frac{11-3\sqrt{5}}{2}\quad\left(m,n\ge 0\right)$$ which are automatically algebraic integers. Any potential tiling of the equilateral triangle from these quadrilateral units corresponds to some integer polynomial relation of the above algebraics, whose polynomial degree correlates with the number of quadrilateral pieces in the tiling.

Unfortunately all the above algebraics have large norms, so a blind search for the desired polynomial is out of the question, and I had to reduce the pieces' proportions again to the rationals. I was able to find a $60^\circ$-angled isosceles trapezoid with shorter-base-to-leg ratio of $10$ using $79$ tiles, and a $60^\circ$-angled parallelogram with neighboring sides' ratio of $11$ using $80$ tiles. Thus a few more tiles produce a $60^\circ$-angled rhombus, and another few more tiles produce a $60^\circ$-angled isosceles trapezoid with shorter-base-to-leg ratio $1$, three of which tile an equilateral triangle, using a total of $121\,170$ triangular tiles. While I was at it, I found this less related post that might reduce my number of tiles to a bit below a hundred thousand.

Meanwhile, I also did a quick computer search through some conceptually simple configurations that attempt to tile the equilateral triangle using less than about $50$ tiles, and I found nothing at all.

I get this feeling that about a hundred thousand tiles is not the optimal amount for such a tiling, so I'm asking to see if people have better ideas. I'm unable to provide cash incentive as the parallel post did, but anyone who tries this puzzle will sure have my gratitude.

To get to the quadrilateral tiling units that I used, the first thing is to de-nest the radicals as I mentioned above. As $\mathbf{Q}(\zeta_{60})$ is Galois over $\mathbf{Q}(\sqrt{3})$ (the base field here should not be $\mathbf{Q}$ but instead the coordinate field of the equilateral triangle), if we can geometrically construct any length $\ell$ (or techinically, ratio $\ell$), such that when we perform the same geometric construction but with all the $42^\circ$ angles and $78^\circ$ angles swapped with each other, we still provably construct the same $\ell$, then it must hold that $\ell\in\mathbf{Q}(\sqrt{5})$, so that $\ell$ doesn't contain any nested radicals.

There were a couple of ideas on what $\ell$ should specifically be, most of them parallel ideas that can all be found in the parallel question for the square. I settled on the above $\mathbf{Q}(\sqrt{5})$-quadrilaterals (the ones that are a single row of triangular tiles) because they had the smallest numerator norms among others. As a non-example, there was a double-decker idea using $9$ tiles that resulted in a trapezoid with ratio a rational multiple of $889-321\sqrt{5}$, yuck. There were also some non-triviality in which way the triangles should be oriented when being put into a single row, but some more calculation showed that the above $(m,n)$ form are all we really get. More precisely, a trapezoid also can't have $m=0$, and a parallelogram also can't have $n=0$.

So the process was more like "I frankly don't know what else to do" rather than "I see potential simplifications but I don't know the optimum". It's also why I'm seeking for completely new ideas (see above) that aren't found in the parallel question about the square.

RavenclawPrefect also asked a well-motivated question for if the same tiling could be performed but with congruent tiles. M. Laczkovich proved this is impossible in a subsequent paper Tilings of Convex Polygons with Congruent Triangles.

I'm posting a new answer to this question, because the techniques I'm using differ substantially from the previous answer and it was already getting quite long. (Much of this answer was written prior to Anders' excellent answer, so it retreads some ground there.)

Edit: This answer in turn has been updated many, many times with improved constructions - feel free to peruse the edit history to see my earlier attempts.

Here is a parallelogram of a ratio $1$ larger (so with the same base) made from four such triangles:

(Note that it is not given by adding a triangle to the previous construction! The bottom three points are in the same location, though.)

As Edward H observes, we can actually extend either of the two parallelograms above by inserting a non-$60$-degree parallelogram in between an edge where only red and blue angles meet; this lets us spend $2$ more triangles to create trapezoids and parallelograms of ratios $\frac{9-3\sqrt{5}}{2}$ more.

This gives us an obvious path forward: start with our two basic trapezoid and parallelogram solutions (plus their extensions), then combine them in the above ways looking for small tilings of nice rational-ratio trapezoids and parallelograms until we find a set we can nicely fill an equilateral triangle with.

I wrote up some code to perform exact computations with elements of $\mathbb{Q}[\sqrt{5}]$, and started storing all of the trapezoids and parallelograms one can make with up to around $90$ triangles, but bounding the size of the rational numbers involved to prevent the search space from getting too out of hand. (If I have a parallelogram of ratio $1173/292-46\sqrt{5}/377$, I'm probably not going to end up needing it.)

This alone doesn't turn up very many rational-ratio shapes, so I ran a second script that checked amongst all of the shapes generated in the previous iteration for those whose irrational parts were the negatives of each other, and combined them into new, rational-ratio shapes. 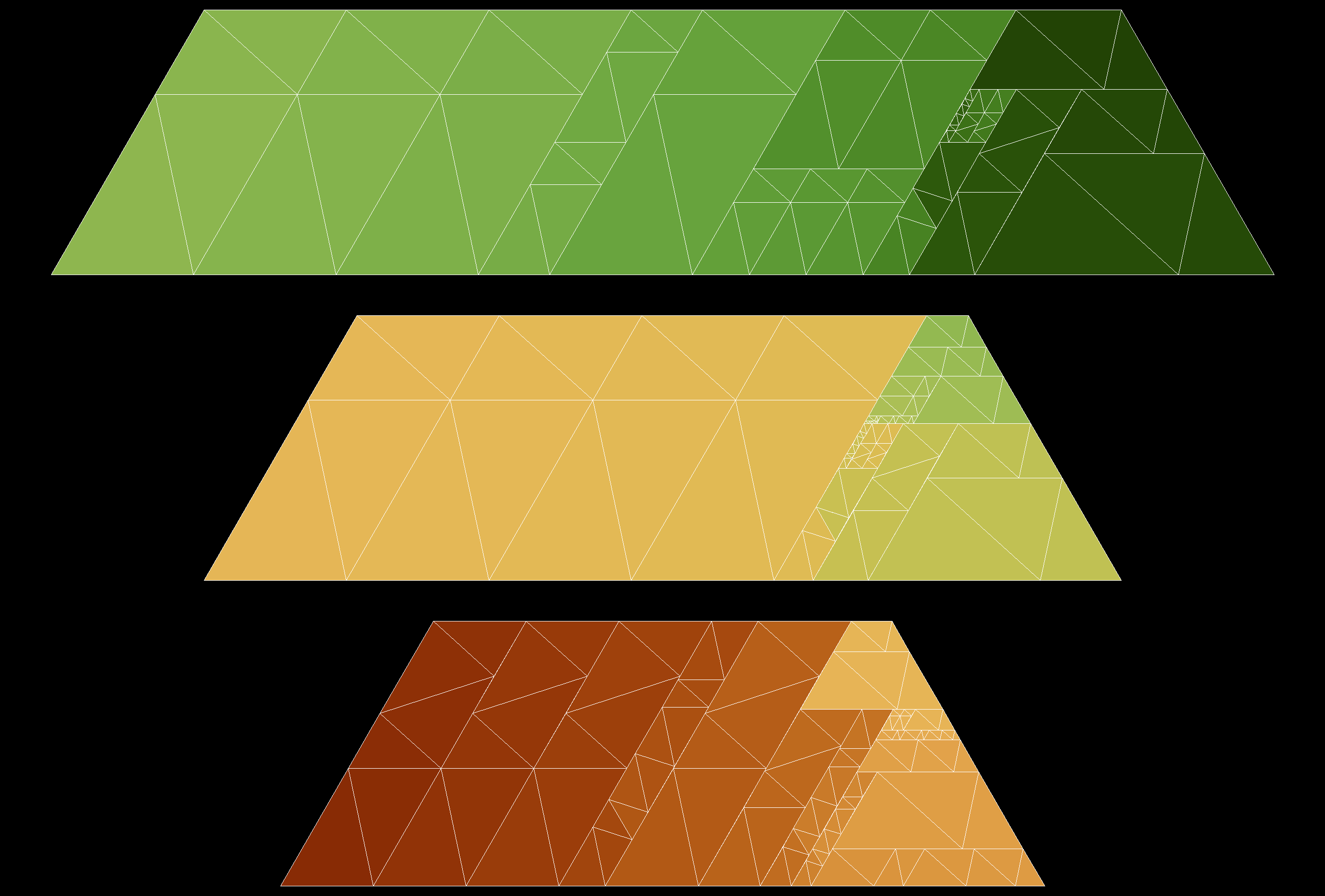 If we place the ratio-2 trapezoid on top of the ratio-3 trapezoid, we obtain a trapezoid of ratio $1$ using $186$ triangles: 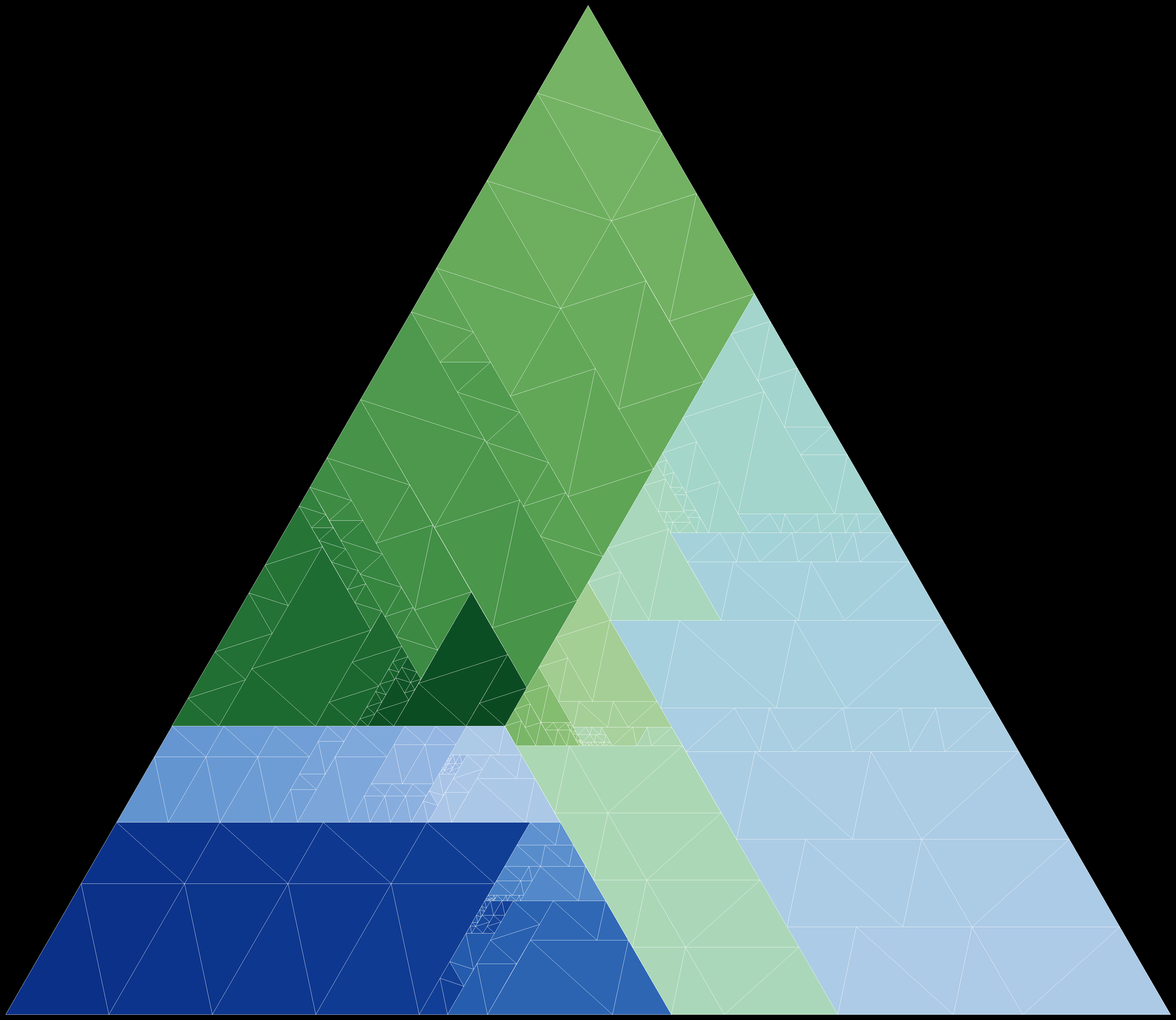 We can then fit all these pieces onto a triangular grid: the trapezoid takes up $21$ triangles, the skinny parallelogram $22$, and the diamond-shaped region just $2$ (but at a great cost). Of course, any of them can be scaled up by some integer factor and still lie on the grid.

Using some code I wrote to solve tiling problems plus some manual modifications, I have found the following packing of an isosceles trapezoid with base-to-leg ratio $1$ (in this case, scaled up on the triangular grid by a factor of $12$ in each dimension):

EDIT (RavenclawPrefect): I've found some improved ways to tile parallelograms, which can be used along with nickgard's solution to reduce the number further.

Here is a tiling of a $1\times 2$ parallelogram with seven $1\times 11$ parallelograms (contrast with the $22$ it would take by joining two rhombi together):

For the $1\times 7$, using $6$ skinny parallelograms gives us $6\cdot 80$, but we can also use $6$ trapezoids as described in Edward H's comment on this answer for $6\cdot 79$ tiles, which offers a slight improvement.

Using these more efficient packings, I can fill in the "staircase" shape in nickgard's answer as follows:

Edit 2 (RavenclawPrefect): After lots of fiddling around with decomposing the "staircase" shape into nice axis-aligned parallelograms, I realized that I could just apply an affine transformation, turning the whole staircase into a very tall polyomino of size ${10\choose 2}\cdot 11=495$ with "steps" of height $11$, and try to tile the resulting thing with squares directly.

This resulted in a substantial improvement, giving a tiling with $46$ squares (hence, $1\times 11$ parallelograms once transformed back); the resulting image would not embed well due to its height, but I have uploaded it to imgur here. Update: I have slightly improved this tiling to a $45$-square solution, seen here. 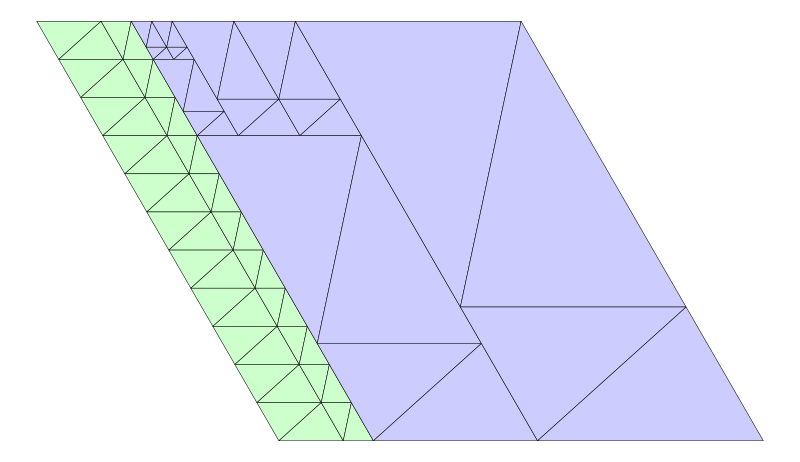 Using this idea in a version of the “staircase” construction yields much more efficient tilings of the trapezoid of ratio $1$. Here’s one with $45 \cdot 4 + 10 \cdot 3 + 44 \cdot 4 = 386$ triangles. (I’m now using a dynamic programming algorithm that tiles the green region and the blue region each in one pass rather than slicing them into parallelograms. For clarity, divisions of basic trapezoids/parallelograms into three/four triangles are not pictured.)

Probably a yet more efficient tiling could be constructed by cutting a small number of basic trapezoids out of the equilateral triangle more or less arbitrarily until a single parallelogram remains, solving for its ratio $r \in \mathbb Q[\sqrt 5]$, and applying the above rectangle-tiling construction once. Finding a way to do this such that $u, v \ge 0$ has been trickier than I expected though.

Not the answer you're looking for? Browse other questions tagged abstract-algebra geometry recreational-mathematics puzzle tiling or ask your own question.

108
What is the smallest number of $45^\circ-60^\circ-75^\circ$ triangles that a square can be divided into?
83
Can a row of five equilateral triangles tile a big equilateral triangle?
11
Tiling of a $9\times 7$ rectangle
4
How few $(42^\circ,60^\circ,78^\circ)$ triangles can a regular hexagon be divided into?
0
What is the maximum number of T-shaped polyominos (shown below) that can be put into a 6x6 grid without any overlaps? The blocks can be rotated.