If we know the congruence of the apex and the base of two isosceles, are both congruent triangles? (help with the proof)

Well, there are general criteria for congruence of triangles:

And there are some criteria for specific triangles:

And my question is about one case that I know is true in Euclidean geometry (which I would call AB—Apex-Base—):

If two isosceles triangles have in common the apex and the base, both are congruent

It's "obvious" but the proof is not that obvious. Here's my attempt.

Let △ABC and △A'B'C' be isosceles triangles like the next figure 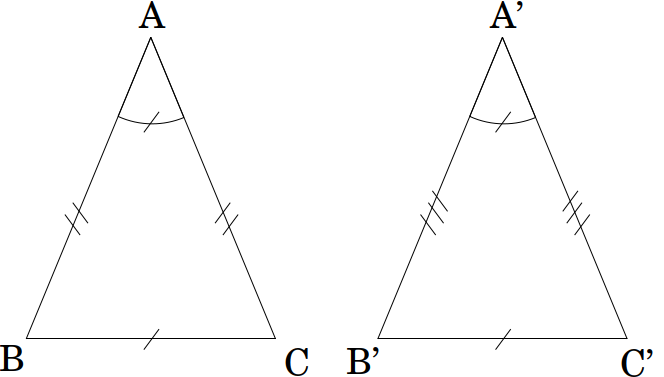 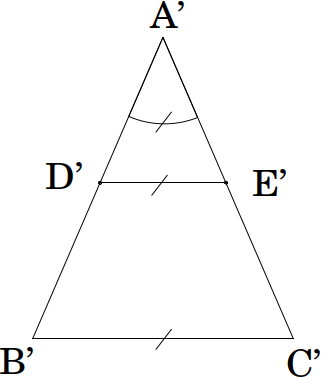 That's what I did, but I feel that the contradiction is not fully handled, especially because I cannot find another argument but visual that D'E' < B'C'. As I mentioned before, I know this is true in Euclid's (plane) geometry. I'm more interested in a proof (if exist) avoiding parallels (or equivalently the constant sum of the measures of the angles of any triangle), so that the result would be a neutral geometry like the SAA criterion (https://www.jstor.org/stable/27960835?seq=1).

Or I'm trying to prove a result that's not neutral geometry that in some cases D'E' =B'C'?

Thanks for your answers, they are very useful. But up this moment all of them depends on the parallel postulate which I try to avoid in order to find out if this is a neutral geometry result.

If you know that the sum of angles in a triangle are $180^\circ$, then, if the apex has value $A$, the other two angles are $90^\circ-A/2$. Then the problem is reduced to the angle-side-angle case. The side is the base.

In your case you use the same angles to show $D'E'||B'C'$. Then the triangles are similar, and the ratio of the sides is equal to the ratio of the bases. You know that the bases are the same, so then the sides must be the same. The problem is then reduced to side-side-side case.

Your proof is correct - good job there.

An easier way to see this is the following:

Well, they're now congruent (by SAA or equivalent).