What's the most elementary way to solve this trigonometric problem? 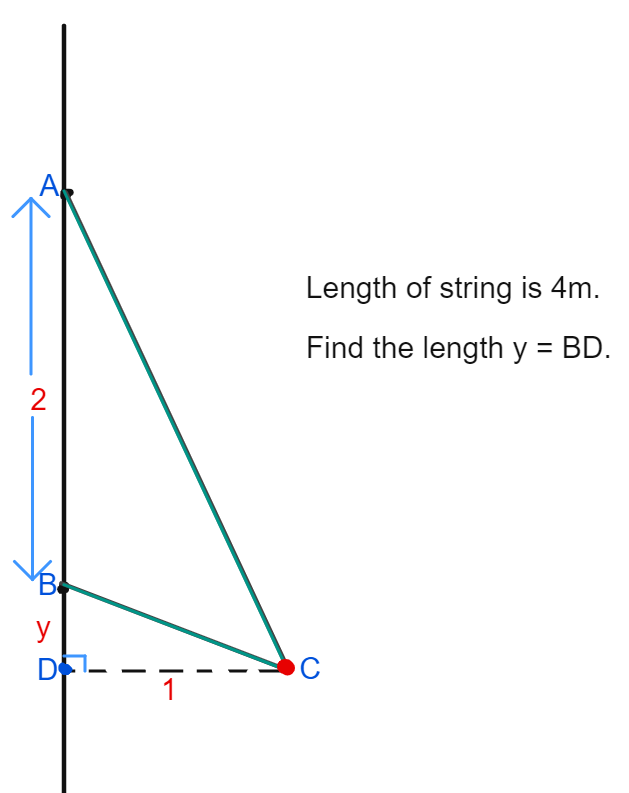 This is a question I came up with, and I thought there should be some relatively simple trigonometric methods to get to the answer. I tried lots of stuff but nothing seemed to work.

Of course, we could find the equation of the ellipse that corresponds to the locus of points the bead could be when the string is taut, and then find the two values of $y$ when $x = 1$. But I'm looking for more elementary methods involving only trigonometry and Pythagoras. This is because I want the answer to be aimed at secondary school students who know elementary trigonometry only (Pythagoras, addition angle formulae, R addition formulae etc).

I will give a simple solution using ellipse which is rather more easier.

We also have Heron's formula for the area:

And since the larger side is $b$,

Now, with Pythagoras' theorem in the triangle BDC:

This is the closest I could come up with to a purely "trigonometric" answer, and has minimal algebra. Firstly note you have a triangle divided into two, so it may be useful to use the standard formulae for a divided triangle. Quoting from my (rather old!) secondary school mathematics textbook:

Here the large triangle is $\triangle ABC$ and the Greek-lettered angles are $\alpha = \angle ACD$, $\beta = \angle BCD$ and $\theta = \angle BDC$ and is supplementary to $\angle ADC$. Given your example is about a string attached to a wall, you might not be surprised this is listed in the "Mechanics" section of the textbook, and usually used in school examinations to solve three-force problems. There is a very useful special case listed, which sadly doesn't apply here but I'll include it for completeness:

The first equality doesn't tell us anything new, but the second yields (with a little bit of algebra):

Secondly, note that since $AC + BC = 4$, we know that $\triangle ABC$ has perimeter 6 and semi-perimeter 3. Hence it is very inviting to use Heron's formula or the closely-related law of cotangents. In fact, since for the one side we know, we also have the altitude (perpendicular height) and hence can calculate the area, this temptation becomes overwhelming. I find the most practically useful formulation of the law of cotangents when solving a triangle is:

or for calculator purposes, should we lack a cot button, the reciprocal:

Here $\alpha$ and $a$ are any opposite angle-side pair (indeed the formula is often stated with equalities also for similar expressions involving $\beta$ and $\gamma$, resembling the law of sines, but I find that form is generally far more useful for trigonometric proof than solving a given triangle), $r$ is the radius of the incircle (not relevant here but sometimes useful), $T$ is the area of the triangle and $s$ the semi-perimeter. In our case $(3)$ becomes:

With an electronic calculator, it is now straightforward to calculate $\alpha$ and hence $2 \cot \alpha$, substitute into $(2)$ and solve the simple quadratic for $y$. If an exact or non-calculator solution is required, we can instead use the double-angle formula:

Ignore my verbal commentary, and this method gets to the answer in just a couple of lines of working, involves no algebraic rearrangement except solving a simple quadratic, and packs a very hearty dose of trigonometry from a high school textbook. Accept the use of an electronic calculator after $(2)$ and it doesn't even require the angle-sum, double-angle or harmonic addition ("R") formulae. Sadly, I expect it is the case that your local schools' curriculum lacks some of the goodies in my textbook. This is a shame! The first time I saw the divided triangle formula, I recall the sinking feeling that it looked like an awful lot of hard work. What I've discovered in practice, whenever I've had recourse to use it, is just how much hard work it saves me...

Many proofs are available online and in textbooks for the law of cotangents but the divided triangle formula seems more obscure.

Often half the battle with trig is identifying the correct formula to use: which best represents the state of our knowledge? For example, knowing the area, perimeter and one side of a triangle, the law of cotangents is ideal for finding the angle opposite the known side. Here's another rule true for any $\triangle PQR$ and deduced by dropping the perpendicular from $Q$, which a little thought shows is true in both the acute and obtuse case:

where $q = PR$ etc. Formula $(5)$ is useful if we want to write an included side in terms of its including angles and the other two sides. In practice it's rare that we are given four out of five of these quantities, or wish to represent all five in one equation. However, $p$, $r$, $P$ and $R$ are redundant by the law of sines, so we can cut one out:

Returning to the figure in the textbook, the key to representing the situation is that the smaller triangles $\triangle ACD$ and $\triangle BCD$ are linked by a common side $CD$ and the fact $ADB$ is a straight line, so $\angle ADC$ and $\angle BDC$ are supplementary. Hence $CD$, $\angle ADC$ and $\angle BDC$ must appear in our equations if those facts are to be brought to bear. Moreover, we want $AD = m$ and $BD = n$ to appear too, since they were indicated as of particular interest (the ratio $\triangle ABC$ was divided in for the textbook; the lengths marked on the wall in the OP's question). Needing to represent two sides and an included angle in each of the smaller triangles rules out the law of sines; we could apply the law of cosines if we wanted $AC$ and $BC$ to appear in our equations also. Alternatively we can apply $(4)$ if we prefer two sides and two angles in each equation.

Here's an alternative trigonometric approach that doesn't assume knowledge of the divided triangle formulae, but at the expense of additional work algebraically. 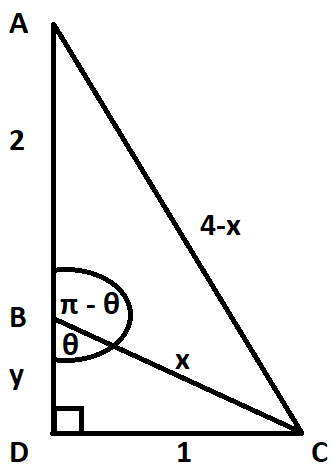 Half the battle with trigonometry is getting started: which formulae capture the key details of your set-up? If we want to do trigonometry separately on the smaller triangles $\triangle ABC$ and $\triangle BCD$, the following points are essential:

So we expect to need these angles and sides in our equations. For $\triangle ABC$ we also know $AB = 2$ and $AC = 4 - x$. A way to incorporate all three sides and $\angle ABC$ would be the law of cosines:

where we used the fact $\angle ABC$ and $\angle CBD$ are supplementary, because we want to relate this finding to the other triangle.

Since $\triangle BCD$ is right-angled, we can stick to basic "SOHCAHTOA" rather than anything fancy, and as discussed above we certainly want to make use of $BC = x$ and $\angle CBD$. There are two choices which both give the solution, though in very different ways.

Take the sine of $\angle CBD$; combine with cosine by harmonic addition

Note that the harmonic addition formula also produces an obtuse solution around 159.2°, for which we obtain $y \approx -2.63$, corresponding to the bead lying 0.63 vertically above $A$ instead of 0.63 vertically below $B$.

Take the cosine of $\angle CBD$; compare results and form a quadratic

Comparing results we have:

Filling that into our diagram we see $AD = y+2 = 5-2x$. We now have all the lengths of the right-angled triangle $\triangle ADC$ in terms of $x$, so we can form a quadratic using Pythagoras. Note we could instead write the sides in terms of $y$, but there would be fractional coefficients which make unnecessarily hard work. It's easier to find $x$ then use $y = 3-2x$ to convert back to $y$ at the end.

Note that it's the lower of these two values which yields the positive root for $y$,

while the negative root

corresponds to the solution above $A$, as before.

This works like the above, but has the slight advantage it doesn't require students to know $\cos (\pi - \theta) = - \cos (\theta)$. It makes use of the fact $ABD$ is a straight line by looking at how a small triangle lies inside the larger one. Using the law of cosines in $\triangle ABC$:

Then in the right-angled triangle $\triangle ACD$, we have

We can apply Pythagoras to $\triangle ACD$ and solve for $x$ and $y$, as above.

Not the answer you're looking for? Browse other questions tagged trigonometry triangles or ask your own question.