Understanding the notion of distance between two symmetric convex bodies

I am new to the notion of distance between two symmetric convex bodies, and I am looking for some help in understanding the same. This is also meant to be an informative post for those who are not already familiar with the idea and want to scratch their brains a little on New Year's Eve. I hope you enjoy it!
To begin with, I quote the definition with a supplementary figure below:

The distance $d(K, L)$ between symmetric convex bodies $K$ and $L$ is the least positive $d$ for which there is a linear image $\tilde L$ of $L$ such that $\tilde L ⊂ K ⊂ d\tilde L$. Note that this distance is multiplicative, not additive: in order to get a metric (on the set of linear equivalence classes of symmetric convex bodies), we would need to take $\log d$ instead of $d$. In particular, if $K$ and $L$ are identical then $d(K, L) = 1$. 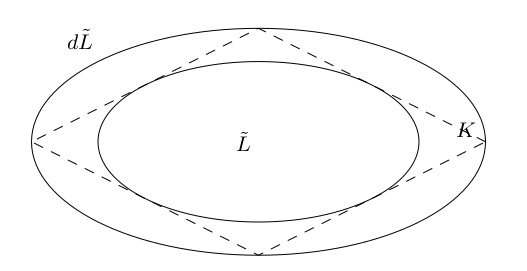 Two convex bodies $A,B \subset \mathbb R^n$ are called affinely invariant if there exists a matrix $M$ of square dimension $n$ and a vector $v \in \mathbb R^n$ such that $A = MB + v$. That is, $A$ is $B$ scaled by $M$, and then shifted by $v$. Since both $A$ and $B$ have non-empty interior(that's what a convex body is) then $M$ will be invertible, so this is a symmetric relation.

For example , any two parallelograms are affinely invariant, by scaling the sides appropriately , rotating if required then shifting.

$B$ is called a linear image of $A$, if there exists a matrix $M$ such that $MB = A$. Again, we are dealing with convex bodies so $M$ will be invertible.

Note that the only differences is that if $A$ is a linear image of $B$ then both will be "centered" around the same point.

An alternate definition for the distance $D$ may be provided as follows : given two symmetric convex bodies $K$ and $L$, shift them both so that their centers are at the origin. Then : $$ d(K,L) = \inf_{T \textrm{ linear transformation}} \inf \left\{a \cdot b : \frac 1a K \subset TL \subset bK\right\} $$

Try to prove the equivalence. If you cannot prove it, then just assume it for the following discussion.

This definition is inspired from the Banach-Mazur distance between two normed spaces. Essentially, you want the best linear transformation which kind of brings two normed spaces as close as possible. The best you can do is if they were isometrically isomorphic i.e. a linear transformation took one set to the other while preserving distances. But this doesn't always happen, so the best way to do it then specifies a distance, on the spaces of $n$-dimensional normed linear spaces up to isometric isomorphism, which is basically what identical means in the context above.

Now, identical in the text refers to identical up to affine invariance.

Conversely, if the distance between two convex bodies is $1$, then one is a linear image of the other and they are identical.

Indeed, the distance is symmetric, for the reason you mention. You can try to prove it from the definition in my answer.

The distance is not multiplicative, it is sub-multiplicative. The problem is basically with the last implication : sure $\tilde{M} \subset K \subset \beta \gamma\tilde{M}$, but this does not imply that $\beta \gamma$ is the smallest number with this property, so $d(K,M) \boxed{\leq} \beta \gamma$, and it very well could be smaller. Just like how it is with numbers (equality in the triangle inequality implies something about the numbers), equality of the kind $d(K,M) = d(K,L)d(L,M)$ should imply something about $K,L,M$, but I am not sure what this relation is.

The author's exact paragraph is this :

Our observations of the last lecture show that the distance between the cube and the Euclidean ball in $\mathbb R^n$ is at most $\sqrt n$. It is intuitively clear that it really is $\sqrt n$, i.e., that we cannot find a linear image of the ball that sandwiches the cube any better than the obvious one. A formal proof will be immediate after the next lecture.

The thing is, just like you have done in part $4$, finding a covering of one body by another scaled, doesn't automatically make that covering the best one!

Both of these are easy exercises.

But this is just one covering. What if there's a better covering, which gives a better value for $d$? This is intuitively obvious when we think about it, but the proof involves the notion of a maximal ellipsoid contained in a convex body. In fact , it is true that the distance is $\sqrt n$ : this comes from comparing the maximal ellipsoids for the square and the sphere.

But again, why ellipsoids? The answer is simple : an ellipsoid is basically a linear image of the unit sphere. Any linear transformation is characterized by what it does with the unit ball i.e. which ellipsoid it produces. So looking at a convex figure, and the linear transformation associated to distances, is like thinking about each convex figure as an $n$-dimensional normed space in its own right, and the respective "unit balls" which are then ellipsoids. The best fit ellipsoid is then the best "unit-ball" approximation of a convex figure, so studying a convex body kind of comes down to studying this maximal ellipsoid.

There are a few desirable things : taking the logarithm of $d$ provides a (usual) metric among isomorphism classes of normed linear spaces in $\mathbb R^n$. It is nice to know that this metric space is compact, so basically given an $\epsilon>0$ , you can find a finite set of spaces so that every space is at most $\epsilon$ far away from that. This is like saying that this finite set "approximates all possible shapes" very well.

You can also prove that any convex body is at most $n$ away from the unit square, in this distance. Thus, by sub-multiplicativity, any two convex bodies are at most $n^2$ apart in this metric. Try this exercise for yourself.

John's theorem is that any convex body is in fact at most $\sqrt n$ away from the unit sphere. This is more difficult than the exercise above.

Gluskin's theorem states that there is a universal constant $C>0$ such that for each $n$, one can find two convex bodies that are at least $c \sqrt n$ apart. This took some effort as well.

Apart from that, I can't really say anything about $d$ being very special. In the same lecture notes, you will find however, that if as a polytope gets closer to a ball in distance, its number of faces increases exponentially fast. Basically, approximating a ball by a polytope in this distance, you'd require exponentially many faces in the required distance.

Finally, imagine that some property was "continuous" with respect to $d$ : that is, if a space has this property and another space is very close to it, then that space also has the property. This is nice, right?

Turns out one such property is called $B_n$-convexity. I don't want to go into the definition, but a space is $B_n$-convex, if there is an $\epsilon>0$ such that given any $n$ elements of unit norm in the space, you can add/subtract them from one another , using each one exactly once, so that you can travel at least $\epsilon n$ distance away from the unit sphere.

One can show that the Euclidean ball has this property . The unit square does not : if I take the usual basis coordinate vectors, and add/subtract them in any order, I will always land up on a corner of the square, never outside it.

Apart from this, there's not really much that can be done : even simple upper and lower bounds are difficult, forget about actual values.

One can do asymptotic analysis : for large $n$, what is the maximal distance of a convex body from another fixed one? For the unit square, polynomial upper and lower bounds are available.

Both are difficult to show in general. Techniques include randomizing(!) the selection of convex bodies, which is what leads to Glushkin's proof. Then, there's a "dual"-realization of every convex body, which kind of "flips" problems around : if you can't deal with the body at hand, dualize.

Then there's a result of Szarek-Talagrand, which is basically a nice approximation-type result for the minimal ellipsoid, along with the Sauer-Shelah lemma, which kind of provides lower and upper bounds of intersections of a set family with another fixed set. These results are all beyond my technical ability , though, and I assume that for your further reading of the document, this is all you will need to know about $d$ : neither is it explicitly calculated for a pair in the document (other than between square and ball) nor is it much expounded on.

Not the answer you're looking for? Browse other questions tagged geometry analysis convex-geometry or ask your own question.

6
Need help in understanding (a part of) the proof of John's Theorem
0
Reformulation of a theorem about the lower bound on no. of facets of a symmetric polytope in $\mathbb{R}^n$

4
Surface area of Convex bodies contained in one another
3
A trigonometric problem when calculating distance to the boundary of a convex hull
3
Theorem 1.8.5 - Convex Bodies: The Brunn-Minkowski Theory
0
Distance between two disjoint convex sets
0
Reformulation of a theorem about the lower bound on no. of facets of a symmetric polytope in $\mathbb{R}^n$